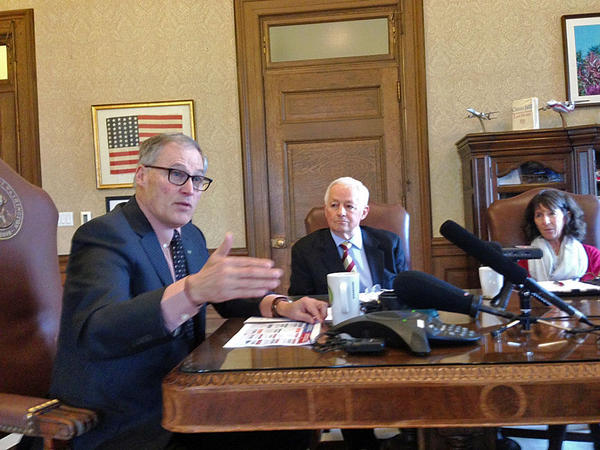 Washington Gov. Jay Inslee is calling the Republican healthcare plan in Congress “a disaster.” Inslee made his comments Wednesday as new projections on the impact to the state were released.

Inslee said 600,000 poor Washingtonians would lose Medicaid coverage under the American Health Care Act. And another 100,000 people would likely drop out of the individual healthcare market.

“I don’t know whether to call it a FUBAR or a SNAFU situation, it’s hard to argue which one of those two it is, but it is fouled up,” the governor said.

Inslee went on to accuse Republicans in Congress of putting the wealthy ahead of sick people.

“It’s become clear to me that this is a tax cut for the rich masquerading as a health care reform,” he said.

Inslee was joined by Insurance Commissioner Mike Kreidler who said under the American Health Care Act Washington’s uninsured rate would be higher than it was before the Affordable Care Act.

Inslee said he’s hopeful the Republican plan will be derailed.

The Republican chair of Washington’s Senate Health Care Committee responded to the governor’s comments. Ann Rivers said any healthcare proposal in Congress will undergo many revisions and she says lawmakers will have time “to address any changes that affect Washingtonians.”

Rivers went on to say in her emailed statement that Washington “has been a leader on health-care policy and health-care coverage for a long time, and that won’t change.”