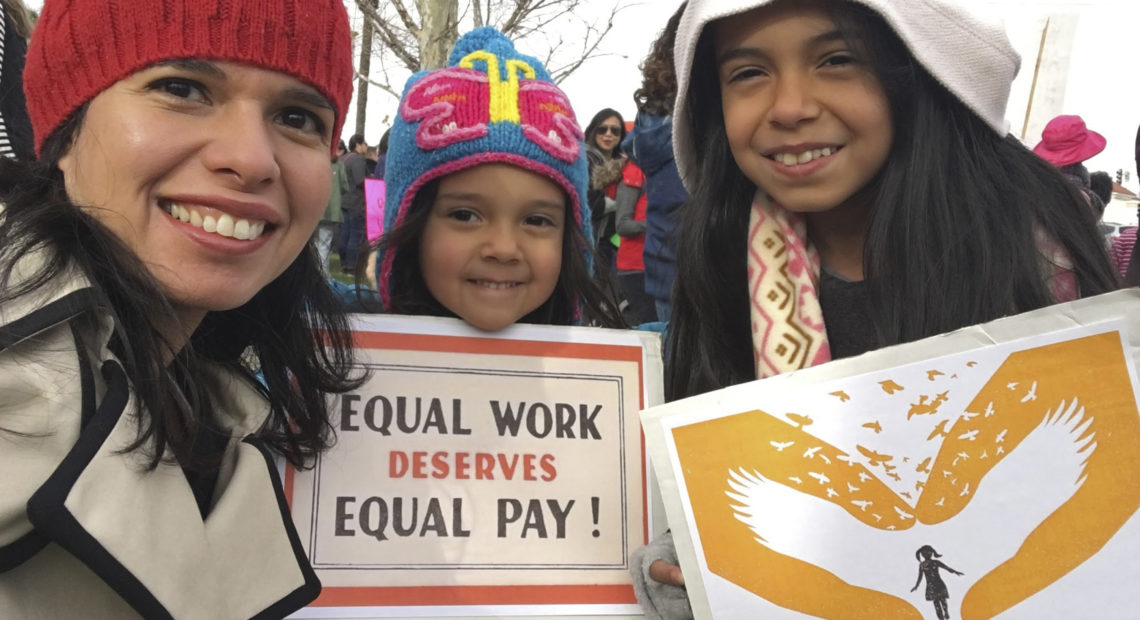 Women Can’t Have Prior Salaries Used Against Them, Court Says In Equal Pay Case

PHOTO: A federal court has sided with Aileen Rizo, who filed suit after realizing her male counterparts were being paid more. The ruling overrules a previous interpretation of the 1963 Equal Pay Act. Rizo is seen here with her daughters in a photo she provided to the AP in 2017. CREDIT: AILEEN RIZO

Employers can’t pay women less than men just because they made less at a previous job, a federal appeals court has ruled. The continuing gender pay gap is “an embarrassing reality of our economy,” the 9th U.S. Circuit Court of Appeals said in its opinion.

The court said a woman’s prior salary, whether considered on its own or along with other factors, can’t be used to justify paying a female employee less than her male counterpart. To do so perpetuates discrimination, the court’s majority opinion said.

Citing studies that show American women lose some $840 billion annually because of the wage gap, the court wrote, “If money talks, the message to women costs more than ‘just’ billions: Women are told they are not worth as much as men.”

In the U.S., the average wage gap for women stands at 80 cents for every dollar earned by men. Monday’s ruling came out one day before Equal Pay Day — when advocates work to raise awareness and push for closing the wage gap (you can follow the hashtag #EqualPayDay).

The court’s interpretation of the Equal Pay Act overturns a ruling that had stood since 1982. That precedent viewed an employee’s pay history as one of the federal law’s catchall exceptions that are “based on any other factor other than sex,” but the 9th U.S. Circuit Court of Appeals disagreed.

The point of the Equal Pay Act, the court’s opinion said, is to eliminate long-standing pay disparities, not to preserve them.

Acceptable factors other than sex should be “limited to legitimate, job-related factors such as a prospective employee’s experience, educational background, ability, or prior job performance,” the court said.

The ruling comes more than four years after Aileen Rizo sued the Fresno County Office of Education over her salary.

“The ruling came in a lawsuit by California school employee Aileen Rizo, who learned in 2012 while having lunch with her colleagues that male counterparts hired after her were making more money.

“Fresno County public schools hired Rizo as a math consultant in 2009 for a little under $63,000 a year. The county had a standard policy that added 5 percent to her previous pay as a middle school math teacher in Arizona.

“Fresno County Superintendent of Schools Jim Yovino says he will appeal the ruling in the equal pay lawsuit to the U.S. Supreme Court.”

Rizo explained why she filed the lawsuit last year, in an interview with NPR’s Yuki Noguchi.

“I couldn’t educate myself out of being paid less, I couldn’t get more experience or be in the job market longer to break that cycle,” Rizo said. “Because low wages will follow you wherever you go as long as someone keeps asking you how much you were paid.”

At a news conference after Monday’s ruling, Rizo welcomed the news and made a formal announcement about her political plans: running for a seat in California’s Assembly.

The court’s opinion was written by District Judge Stephen Reinhardt — a noted liberal who died on March 29 after having a heart attack. He was 87.

In that opinion, Reinhardt noted that when Congress approved the Equal Pay Act in 1963, lawmakers were already calling it overdue. Back then, they talked about justice, fair play and economic soundness.

“Salaries speak louder than words, however,” Reinhardt wrote. “Although the Act has prohibited sex-based wage discrimination for more than fifty years, the financial exploitation of working women embodied by the gender pay gap continues to be an embarrassing reality of our economy.”

The case is now potentially heading to the Supreme Court — and the appeals ruling includes a preview of some of the ideas that might be argued if it reaches that stage.

Several judges wrote concurring opinions to say that while they agreed with the result of the court’s ruling, they disagreed with parts of its rationale.

Judge M. Margaret McKeown, joined by Judge Mary H. Murguia, wrote, “the majority goes too far in holding that any consideration of prior pay is ‘impermissible’ under the Equal Pay Act.”

Rizo’s case was an easy one to decide, McKeown says. But she adds that the majority opinion “is unsupported by the statute, is unrealistic, and may work to women’s disadvantage” — citing the desire some female employees may have to bring up their own pay history to gain leverage in negotiations over pay.

In her concurring opinion, Judge Consuelo M. Callahan, joined by Judge Richard C. Tallman, wrote that Reinhardt’s majority opinion “fails to follow Supreme Court precedent, unnecessarily ignores the realities of business and, in doing so, may hinder rather than promote equal pay for equal work.”

In addition to saying that barring any consideration of salary history would remove an economic incentive from the equation of offering and accepting a new job, Callahan writes: “In the private sector, basing initial salary upon previous salary, plus other factors such as experience and education, encourages hard work and rewards applicants who have stellar credentials.”

Callahan also said, “The assumption that prior salary inherently reflects gender bias is not true,” noting other potential explanations such as unequal costs of living in different parts of the country and fluctuations in the supply and demand for workers in certain positions.

At least two states — California and Massachusetts — have approved legislation that bars employers from considering job applicants’ prior salary. Similar bills have been introduced in more than 20 other states.