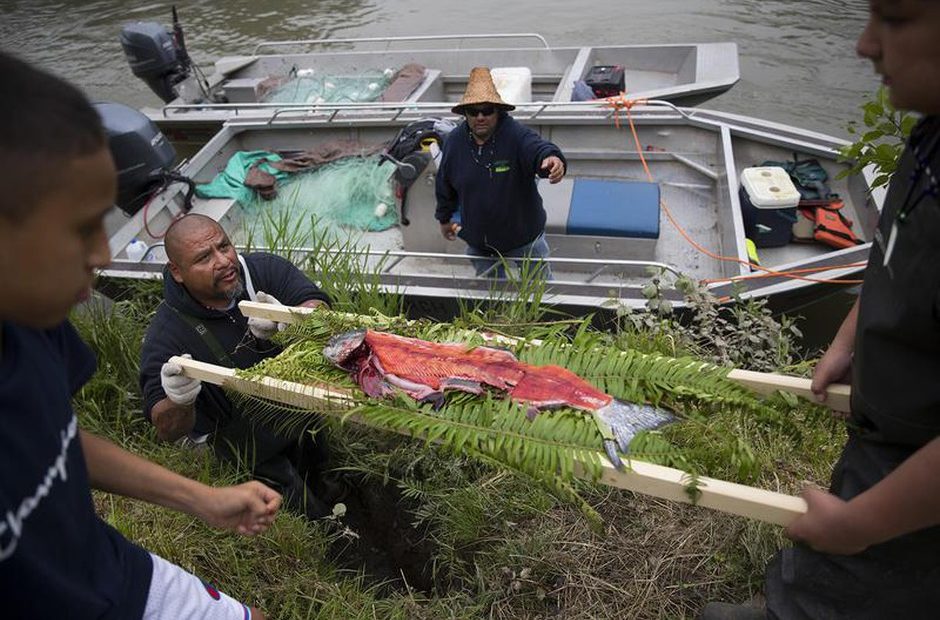 The Puyallup Tribe welcomed the first salmon of the year back to the Puyallup River in Tacoma on Tuesday.

Strangely, perhaps, that chinook’s epic journey from mid-Pacific Ocean to a Puyallup fishing net begins with a sloshing tanker truck.

Tribes from Alaska to California have held annual “first salmon” ceremonies for centuries to thank the wide-ranging fishes for coming home after years at sea.

But some years, the Puyallup River barely has enough chinook salmon to support a ceremony, let alone a tribe whose diet used to be mostly salmon.

Threats to the biggest species of salmon’s survival abound. Yet this year, the Puyallups have at least one reason to hope chinook could make a big comeback.

Follow the Puyallup River upstream from Tacoma, and it’ll take you to the slopes and glaciers of Mount Rainier. That is if a dam doesn’t stop you.

On a branch called the White River, two dams have been giving fish trouble for more than 70 years.

The dams have also given birth to another longstanding tradition for the Puyallups: The tribe and the U.S. Army Corps of Engineers trap fish heading upstream and take them for a 10-mile drive in a tanker truck.

It’s the only way fish can get around the upper dam, a 400-foot-high flood-control structure called the Mud Mountain Dam.

Biologist Terry Sebastian stands at the bottom of a concrete and steel chamber on the side of the much smaller Buckley dam, built in 1911 to divert water toward the now-suburban reservoir known as Lake Tapps.

He dips a long-handled net into a small pool of water and scoops up a steelhead, a close cousin of salmon. He passes the two-foot-long, thrashing fish up to his coworkers from the Puyallup Tribe, who dip it in a tub filled with water laced with a sedative.

“Wild steelhead! Beauty,” biologist Blake Smith marvels as he gingerly handles and measures one of the sedated steelheads. “Little red stripe on it already. It’s been in the river a while.”

Coworker Eric Marks plucks a single scale off the fish and takes a DNA sample with a tiny snippet of a fin.

Then the fish is dumped unceremoniously into a truck.

The small Buckley dam has a fish ladder, but it also has crumbling concrete and rusty spikes that fish often crash into as they swim upstream. Sediment from the Emmons Glacier often turns the White River opaque as milk, and they’re swimming blind.

“It’s just a lot of spikes, nuts, bolts, metal, wood. When they’re jumping aimlessly at it, they just get injured,” Smith said.

“It is hard to conceive of a more deadly situation in the realm of Pacific Northwest salmon passage and handling,” the nonprofit Puyallup River Watershed Committee concluded in 2014. “This situation has persisted far too long.”

The Mud Mountain Dam, according to the Army Corps, is too high for a fish ladder. The flood-control dam’s water levels can fluctuate wildly, making a ladder impractical.

That means for fish, it’s a ride in a truck or the end of the line.

I asked Smith if it ever seemed funny to be hauling live fish around in trucks.

“I don’t know if it’s humorous, maybe humorous in a tragic way. Tragicomedy?” Smith said. “It is what it is. We want to make the best of it for the fish.”

“Is this a dam we need to have around?” I asked.

“Well, gee. You’re asking a fish biologist,” Smith said. He hesitated. “I kind of like rivers without dams. They’re not benign.”

Along with downstream levees also built by the Army Corps, the Mud Mountain Dam protects 400,000 homes and businesses in Pierce County from flooding, according to Army officials.

Army Corps project manager Leah Hauenstein said trucking fish is not that unusual. It’s done at more than a dozen dams in the Northwest. The Corps is spending more than $185 million to replace its fish-trapping facility on the White River with a larger, safer one on the opposite riverbank. Construction breaks ground this week and is scheduled to finish in 2020.

“Once it is constructed, it will actually be the largest trap-and-haul fish passage facility in the nation,” Hauenstein said.

The Corps says the replacement project and a fleet of fish trucks will be able to move 1.2 million fish a year, more than three times as many as the current system has ever hauled in a single year.

The Corps points to increasing numbers of chinook returning to the White River in recent years, though many of those are hatchery fish, not wild.

The Puyallup Tribe is allowed a small ceremonial fishery on spring chinook and, this summer, two six-hour-long fishing seasons on fall chinook.

In odd-numbered years, huge runs of the more common, pink salmon overwhelm the antiquated intake system, and the three species protected, at least in theory, under the Endangered Species Act – chinook, steelhead and bull trout – lose out.

The Puyallup and Muckleshoot tribes have been pushing the federal government to fix the fish-killing Buckley dam for decades.

“We really hope we’ll see reduction in the injuries to the fish,” Smith said.

Near the mouth of the Puyallup River in Tacoma, a small grove of cottonwoods hides among highways, railroad tracks and industrial sprawl. Puyallup fishermen clashed with police there half a century ago to regain their treaty rights to catch salmon.

The riverfront grove full of history has become the tribe’s ceremonial grounds, where tribal members gather each May to celebrate the return of the salmon.

Early Tuesday morning, two skiffs set out to net a few chinooks, the first of the river’s four species of salmon to return from the Pacific each year.

Drummers and singers welcomed the first Chinook, one of six caught just upriver that morning, as fishermen carried it up the riverbank on a stretcher-shaped cedar plank covered in sword ferns. Fisherman Steven Dillon carefully filleted the black-and-silver fish, its bright red flesh to be cooked and shared among the community, the rest to be returned to the river.

“We’ve welcomed our first salmon in an honorable way,” Puyallup Tribe cultural director Connie McCloud said as she led the ceremony. “When Mr. Dillon filleted the fish, the head, the back, the tail was kept whole. So this salmon will return to the water and tell the story of what she has witnessed today.”

The morning was part celebration, part cultural teaching and part lament. Puget Sound salmon have been struggling for decades, with many runs close to extinction.  The U.S. government listed the sound’s chinook salmon as a threatened species nearly 20 years ago.

“I really believe that the creator someday is going to bring all our fish back to us,” tribal council member Sylvia Miller said.

“We used to have boatloads,” Miller said. “We used to fish 24/7, not three hours, not six hours. We weren’t told what days we got to fish. We got out there and fished. That was our life.”

“I am scared if we don’t do something today and keep these ceremonies going, we’ll be telling the next generation, ‘there was once a thing called a salmon,’” Chester Earl said to the tribal members and guests gathered on the riverbank. “We have to take care of our lands. We have to take care of our waters, and we got to keep our ceremonies going so that we’re able to have the salmon come back in the way it used to be. It’s not too late.”

Like their relatives elsewhere in the Northwest, Puyallup River salmon have a lot of problems that can’t be hauled away in a truck.

The population of fish-eating seals in Puget Sound is exploding.

The Pacific Ocean, where salmon spend most of their lives, is warming and turning more acidic, thanks to the world’s unrelenting emissions of carbon dioxide.

But at the end of the Puyallup tribal ceremony, two fishermen picked up the cedar plank with the ferns and the carcass of the first salmon on it. They carried it to the river, laid it gently onto the water and let the current carry it toward the sea.

Their faith was that the first fish will tell its ocean-going relatives: C’mon in, the river’s fine.