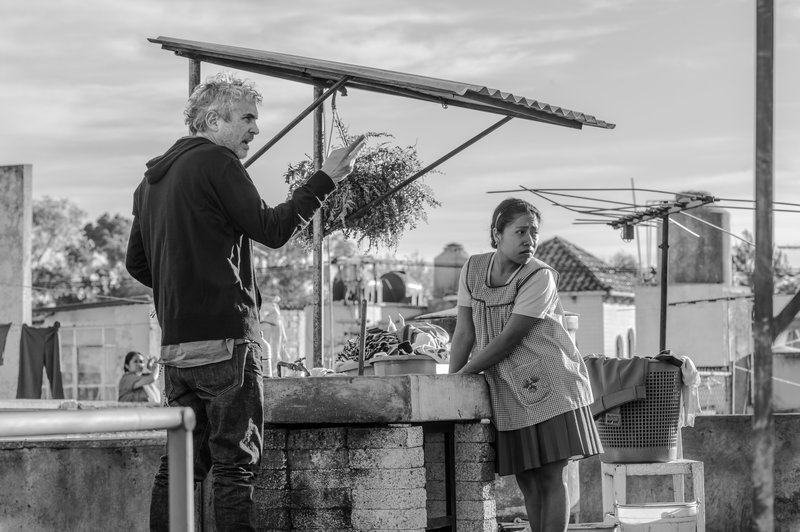 FILM REVIEW: ‘Roma’ Captures A Portrait Of 1970s Mexico In All Its Complex Beauty

PHOTO: For the lead role of Cleo, director Alfonso Cuarón cast the first-time actor Yalitza Aparicio, a native of the state of Oaxaca. CREDIT: Carlos Somonte/Netflix

Roma: a bustling neighborhood in Mexico City, the Spanish word for love — amor — spelled backward, and a subtle nod to the ancient Italian capital, complete with the sounds and smells that linger through memory and time.

From writer and director Alfonso Cuarón (Y Tu Mama Tambien, Children of Men), Roma is based on Cuaron’s childhood experiences and transports audiences back in time to a Mexico City in the 1970s.

It debuted in August 2018 and streamed to Netflix users everywhere starting in December.

The film is hard to explain in concrete words. In fact, there’s not much dialogue, and what is there is all in Spanish or Mixteco (an Indigenous language). In theory, though, the plot is simple. It follows the life of a young woman named Cleo for a year.

Played by Yalitza Aparicio, Cleo is one of two domestic workers serving a middle class Mexican family. Aparicio herself is a 25-year-old Native woman from Oaxaca, Mexico, and a first timer in cinema.

Cleo is the kind of person who’s the first to wake and the last to sleep. She hand washes the family’s clothes and prepares their meals. But Cleo also has an intimate and nurturing relationship with her employer, Sofia (Marina de Tavira), and Sofia’s four children, who Cleo nannies. At night, Cleo tucks each one into bed and sings the youngest lullabies in Mixteco.

Roma is stunning in its black and white richness, but also because of the tenderness it brings to daily life. It honors the complex realities of Mexico then and Mexico now. The long, panorama shots make viewers sit with the intersections of race, class and gender that move with each of the characters, and ultimately influence their actions. It’s hard not notice the shade of Cleo’s skin compared to the lighter counterparts she serves. It’s hard to miss the way Cleo eats in the kitchen with the other maid, but how the children cling to her when they’re watching television in the living room.

In this slice of life, we see the struggles of raising a family, heartbreak and loss, juxtaposed with systemic topics like the influence of the U.S. on Latin America, and the political struggles of student protestors in that decade.

Director Alfonso Cuarón makes sure to flood your senses with rich soundscapes and visuals: A street scene of Mexico City is layered with traffic horns, vendors touting their wares, and a shoe shiner, all seemingly experienced in one brief minute. A day in the countryside hums with the sound of insects, the bleating of sheep, and dogs barking as Cleo simmers in the sunshine and murmurs that the scene reminds her of her own village.

The magic of Roma is tied to its ability to hold several disparate things at once — the quiet chaos of human existence and the connections we have to each other.

It’s a slow, unique film delivered with earnest emotion, and for that it’s received three Golden Globe nominations, including Best Screenplay and Best Foreign Film, along with two dozen other awards and nominations.