There are several agencies and a group of stakeholders who watch over cleanup at the Hanford Nuclear Reservation. But the partial government shutdown is blocking some of that important oversight.

In the past 10 years, the Environmental Protection Agency office in Richland has shrunk from nearly 10 experts working on Hanford issues to just three – including the top manager.

The agency’s job is to watch over several key cleanup projects at the site. For example: cleanup near the Columbia River, a massive dump at Hanford and the so-called Z-9 Crib. That’s where the government poured a lot of liquid radioactive waste in an underground structure near the central part of the site.

In partnership with Washington’s Department of Ecology, it’s EPA’s job to watch over Hanford cleanup. But with the partial shutdown, that office is closed.

Besides overseeing Hanford, the experts at the EPA Hanford office also help oversee work at several superfund sites in the agency’s Region 10, including Washington, Oregon, Idaho and Alaska.

Another watchdog group that’s being slowed-down because of the shutdown is the Hanford Advisory Board.

The board is important because it includes stakeholders like Northwest tribes, industry and retired Hanford experts who watch over the cleanup and advise the federal government with a formal process.

The board is required to publish adequate notice in the federal register, and get travel approved in advance of its meetings – and that can’t happen with the shutdown.

The full board meets only five times a year. And it’s last meeting in December was cancelled because of former President George H.W. Bush’s death, meaning the board has not met since September.

Its next meeting now scheduled for February 13 and 14 is in jeopardy with the uncertainty surrounding the shutdown. A decision whether that meeting can go ahead is expected from Department of Energy headquarters in the next few weeks. 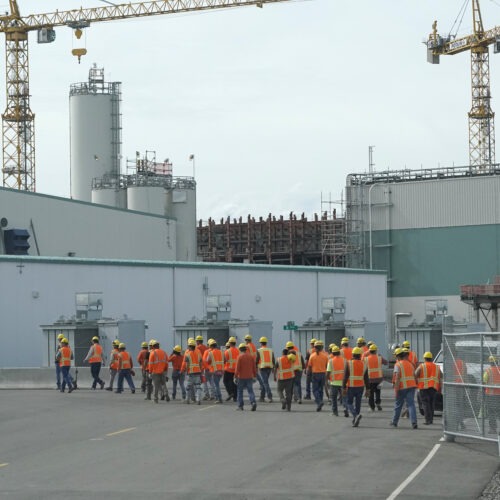 Workers walk at the end of the workday on the site of a facility being constructed to treat nuclear waste, Thursday, June 2, 2022, during… Continue Reading Washington State And Feds Need “Marriage Counseling” On Hanford, Says Government Official