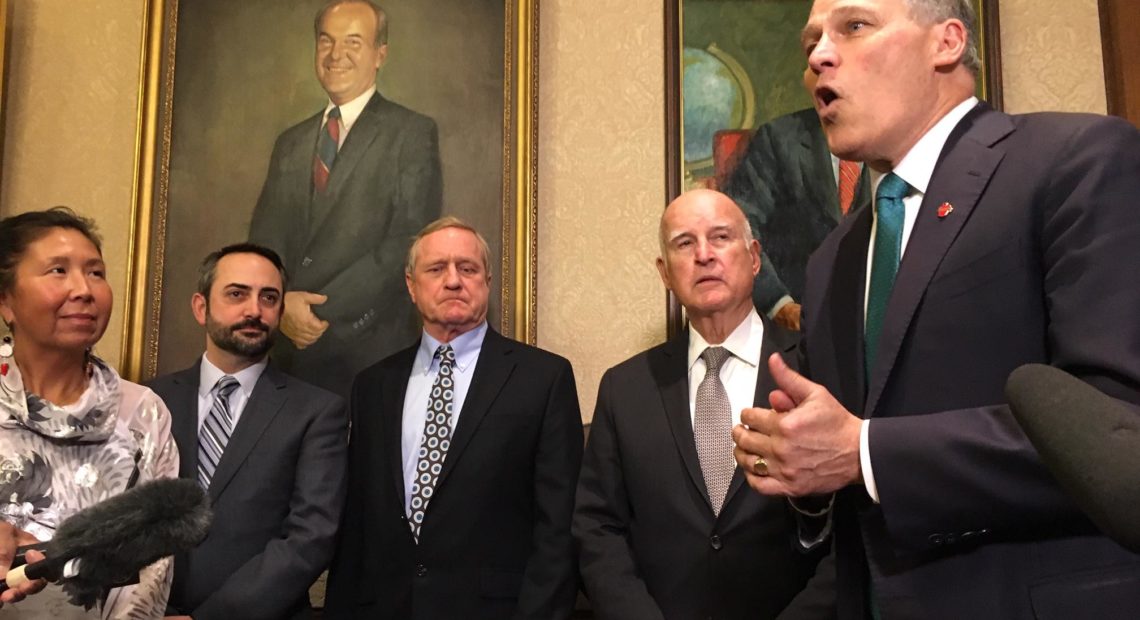 Washington Gov. Jay Inslee will take his most visible step yet towards a possible bid for president when he visits New Hampshire, the first-in-the-nation primary state, on Monday and Tuesday.

That is, if the weather doesn’t foil him. Inslee’s trip to New Hampshire coincides with a predicted major snow storm and deep freeze.

Inslee, a two-term Democrat, is scheduled to attend a house party fundraiser for the League of Conservation Voters, participate in a beer and podcast event and speak about climate change with college students on two campuses.

In a recent op-ed in The Washington Post, Inslee reiterated something he’s been saying for months: that he believes fighting global warming should be the top agenda item for the next Democratic nominee for president.

“We are the first generation to feel the sting of climate change, and we are the last generation that can do something about it,” Inslee wrote. “And that’s why I’m seriously considering running for president.”

In Manchester, New Hampshire, Inslee will hold a climate change roundtable at Saint Anselm College, home to the New Hampshire Institute of Politics, a frequent stop for would-be presidential candidates. Christopher Galdieri, an associate professor of politics at Saint Anselm, said Inslee’s focus on global warming could help him distinguish himself from better known Democrats who are also likely to enter the race.

“The challenge for him is going to be figuring out some way to stand apart from the rest of the field,” Galdieri said. “What’s the narrative of his campaign, what is the story he’s going to tell that’s going to get people excited and pick him?”

Inslee isn’t the only one making tracks to New Hampshire this month. Two declared candidates, Massachusetts Sen. Elizabeth Warren and former Housing and Urban Development Sec. Julian Castro, have both appeared in the state recently as have other lesser known candidates.

“New Hampshire has had a long history of being very favorable towards governors or former governors in the primary in both political parties,” Buckley said.

His best advice to Inslee, or any other candidate for president, is to treat the New Hampshire primary like a run for school board or town council.

“You have to actually get out on the street and talk to actual voters,” Buckley said. “It’s not about television ads and fancy mail. It’s really about relating to, answering questions and having conversations with, real voters.”

After Saint Anselm, Inslee is scheduled to give a talk on climate change at Dartmouth College in Hanover. Michael Parsons of Dartmouth Democrats invited Inslee to speak on campus after meeting him last fall at an event for the then-Democratic candidate for governor Molly Kelly.

“I think that young people are looking for candidates that are going to push policies that really focus on the future and the world that we’re going to live in,” Parsons said. “Obviously climate change has got to be one of, if not the most, prioritized issues of people in my generation.”

But Parsons also said it was too early to endorse any one candidate for president. His current focus is on getting as many of the potential Democratic candidates as possible to Dartmouth in the coming months, so that students can hear from them.

Weather aside, Inslee may also receive a chilly reception from some state Democrats. Last year, Inslee chaired the Democratic Governors Association. Even though Inslee campaigned for Kelly, the DGA did not significantly invest in her campaign. In November, Kelly lost to Republican Chris Sununu even as Democrats won control of the New Hampshire Legislature. Since then Inslee has faced some recriminations.

A spokesman for Inslee, Jamal Raad, said Inslee “admires Molly Kelly and her leadership and personally raised money for her campaign and campaigned for her right after the primary.” He noted that Democrats picked up seven governorships in 2018, the most gains in 36 years. “The map was expansive and we needed to make tough decisions,” Raad said.

It’s unclear if there will be lasting fallout for Inslee over the governor’s race. Buckley, the state party chair, wouldn’t discuss the topic in an interview. Other party officials and activists indicated it’s an issue that continues to give some New Hampshire Democrats heartburn.

“It’s not something that’s going to help him, to state the obvious,” said Larry Drake, the chair of the Rockingham County Democratic Committee in southeast New Hampshire.

But Drake doesn’t think Inslee’s role in the governor’s race is an issue that will reach down to rank-and-file Democrats. Instead, Drake said, the test for Inslee or any Democratic candidate in 2020 is whether they can energize the Democratic base and are seen as someone who can beat President Donald Trump.

“I think the ability to win the general election is probably the single biggest thing that unites New Hampshire Democrats and probably Democrats across the country,” Drake said.

Inslee’s trip to New Hampshire comes on the heels of a visit to Nevada, another early contest state. In October, Inslee created a federal political action committee, called Vision PAC, to raise money to test the waters for a possible presidential candidacy.

Inslee has said he will make a formal decision about a run for president this spring.