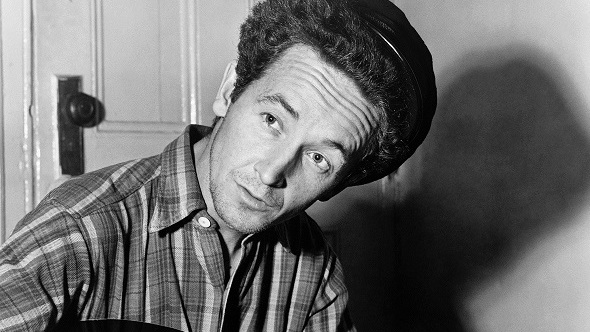 American Anthem: How ‘This Land Is Your Land’ Roamed And Rambled Into American Life

“This Land Is Your Land” is sung in all kinds of settings: elementary schools, political campaigns, parades. During the tense period of President Trump’s proposed travel ban, protesters sang it to passengers who’d been detained at JFK and Philadelphia International Airport. Bruce Springsteen called it “one of the most beautiful songs ever written.” And although it’s been recorded hundreds of times, most people don’t learn it from a recording.

When Woody Guthrie wrote the song in February 1940, he was 27 years old, sitting in his room in a fleabag hotel in midtown Manhattan called Hanover House. His daughter, Nora Guthrie, says her father was a no-frills kinda guy — but also a deeply curious wanderer, who would go out for a pack of cigarettes and not come home for a week or two. So when he sings “this land,” she explains, he’s not just talking about deserts and wheat fields.

“The whole idea of a ‘land’ is your spot on earth,” Nora says. “A spot where you can claim safety, sanity.”

Growing up in Oklahoma, a young Woody Guthrie couldn’t claim much of either: Cyclones, dust storms and heartbreak disrupted his world over and over. A new house his father built burned to the ground. Later, when his older sister Clara was 14, she was ironing on a kerosene stove that caught fire.

A choked-up Guthrie told the story to folklorist Alan Lomax in 1940 for the Library of Congress: “This one blowed up, caught fire, and she run around the house about twice before anybody could catch her,” he said. “And my mother, that was a little bit too much for her nerves.”

Ten years later, Guthrie’s mother died in what was then referred to as a hospital for the insane. She suffered from Huntington’s disease — a genetic brain disorder that was misunderstood at the time (and the same disease that would later kill the singer himself). His father lost everything, and Guthrie and his siblings were sent to live with friends and family.

He ended up in Pampa, Texas, and then, when the brutal dust storms hit, headed to California. Just as the song says, he “roamed and rambled” across the country: walking, hitchhiking, hopping freight trains, going by bus when he could afford it. Nora says that in a way, “the land” was Woody’s home. And he did not like to keep still, even when he recorded those sessions with Alan Lomax.

“Alan would say, ‘Come sit down and have something to eat.’ Woody would stand up and say, ‘Oh, I don’t want to get too comfortable,’ ” she recalls. “Don’t get too comfortable because you never know who’s going to take your home away.”

If you look at the original lyric sheet to “This Land Is Your Land,” Guthrie added a line at the bottom: “All you can write is what you see.” He wanted to sing the truth — and in fact, his song was a rebuttal to another one. Kate Smith’s version of Irving Berlin‘s “God Bless America” was on jukeboxes and radio everywhere during Guthrie’s journey across the country. He, apparently, hated it.

He had seen a lot of the United States by then, from the prairies to the forests to the big cities. In his eyes, America was beautiful, but it was in trouble: He’d seen Dust Bowl refugees fighting for their lives and working people “living like rats,” as he put it. He originally called his song “God Blessed America” — as in, past tense. In one verse that rarely gets performed, he bristles at a “private property” sign.

The left-leaning politics of “This Land Is Your Land” are most likely lost on the millions of kids who have been learning the song for decades now. And yet, politics is partly how the song spread.

Guthrie was pro-union, anti-war and a Communist sympathizer. He also, as he put it, “cussed out high rents … and punk politicians.” There were consequences for his career: The late Pete Seeger, who became an icon of folk music, often appeared with Guthrie, and once told NPR the two were blacklisted as early as the 1940s.

“We did one program on CBS Radio, and a newspaper reported out, said, ‘Red minstrels try to get on the networks,’ ” Seeger said. “And that was the last job we got.”

For some time, the only work Seeger could find was singing for young people. “And that’s how the song really became popularized — not by my father, but by people like Pete Seeger, who was blacklisted,” Nora Guthrie explains. “Basically every kid that went to summer school or kindergarten or college learned ‘This Land Is Your Land.’ ”

Seeger believed the song endures simply because people love to sing it. Nora says plenty of people have told her just that. “We’ve always gotten requests from so many thousands of people over the years, saying ‘This should be the national anthem’ — because it’s filled with beauty and love of country,” she says.

On that particular count, however, the Guthrie family says thanks but no thanks. The song, Nora says, “belongs to the people — not the government.”