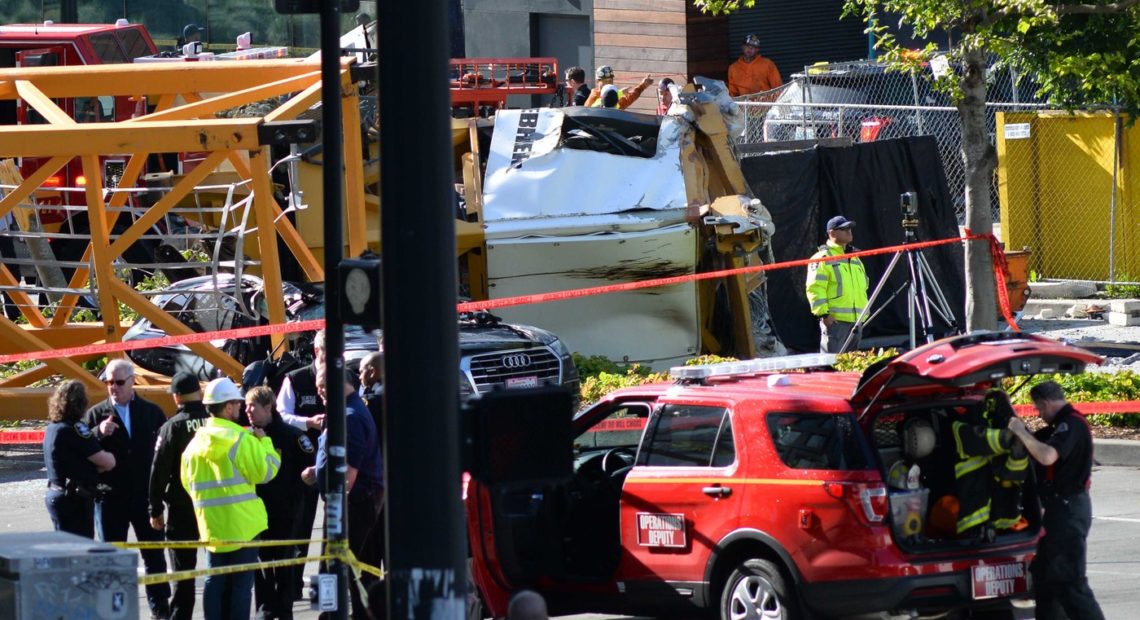 Bruce Eric Cashmere is a middle-aged Australian, and on Saturday he was in Seattle staring up at a crane.

He has worked in heavy machinery his whole life, he said, and this didn’t look right. The crane was being dismantled, and it did not look supported, he said. His son, Deyan Cashmere, 20, in Seattle for leukemia treatment, agreed.

Bruce Eric Cashmere said that he “ate me lunch, and turned me phone off … and it did. It fell.”

The first 911 call was at 3:28 p.m. The giant yellow-orange crane at the corner of Fairview Avenue North and Mercer Street had collapsed on six cars.

Four people died. Two were crane operators. The Cashmeres said they had noticed the operators still in the cab, even as it lilted. The two others died after the crane came down on their cars.

The three injured were in an Audi — a 25-year-old woman and her 4-month-old baby, both of whom appeared to be “doing OK,” said Fire Chief Harold Scoggins, and a 28-year-old male. He was admitted to Harborview Medical Center. A fourth person injured was in a car crushed by the crane, but was not taken to the hospital. 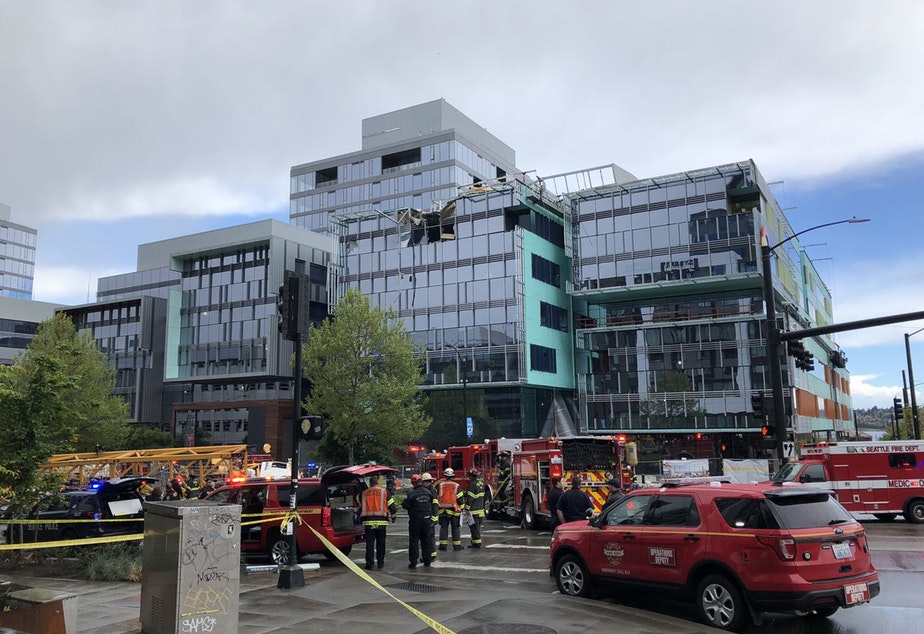 The scene an hour after a crane collapsed on a building at the corner of Fairview and Mercer in downtown Seattle, leaving four dead and three wounded. Among those wounded was a mother and child. CREDIT: SEATTLE FIRE DEPT.

The crane collapsed as workers were dismantling it, the Cashmeres said. They had noticed it earlier in the morning, when Deyan headed to the hospital for treatment. The Cashmeres videotaped it before it fell.

Bruce Eric Cashmere was in the family’s hotel room when the crane fell, he said, then ran down to see if he could help at the scene.

He said he helped a man who appeared to have a broken hip get out of a crushed Audi SUV. The mother and baby also had been in the vehicle and survived.

Witnesses were stunned — and scared.

On Facebook, Linda Nguyen described the scene: “I saw it happen,” she said. “I was right behind those cars. Craziest thing. Like being in an action movie but on slow motion while paralyzed and watching an event happening before your brain could even process what was happening.”

Nguyen said she heard a “sudden loud whirl of wind,” which struck her as odd, because it wasn’t particularly windy, “then saw the crane crash against a building and flip onto the eastbound side of Mercer, just a couple cars from where I was.”

She said she ducked into a nearby alley and called 911 and drove off, “afraid that building might come tumbling down with the crane … and also wanting to keep the alley free for emergency vehicles to arrive.”

Robert Moles, of Mobile, Alabama, had just gotten into his hotel room and was sitting down on his hotel room couch to take off his boots when he felt the couch shake. He thought it was a little earthquake at first.

Moles then ran outside to the corner, where he had been driving just minutes before, and saw crane bits scattered about.

The crane collapsed at a project known as Block 25, which includes six stories of offices for Google and an apartment tower above. The building is part of a multi-block campus nearly twice the size of Google’s Kirkland offices. It’s being developed by Vulcan and built by GLY Construction.

Google’s offices will occupy some of the most visible real estate in South Lake Union, being the first thing seen by many visitors arriving in the neighborhood via Mercer and Fairview or by visitors to Lake Union Park and the Museum of History and Industry.

The building appeared to have suffered substantial damage.

“Until we’re able to do an inspection the building itself, we’ve deemed it unsafe to enter,” Mayor Jenny Durkan said at a news conference. “We don’t know what kind of structural damage may have been done by the crane itself to any of the other components of the building.”

After the crane collapse, all lanes of Mercer Street were closed, and motorists were told to avoid the area. Fairview was also blocked off.

Greening said homicide and traffic collision investigators would be on the scene. 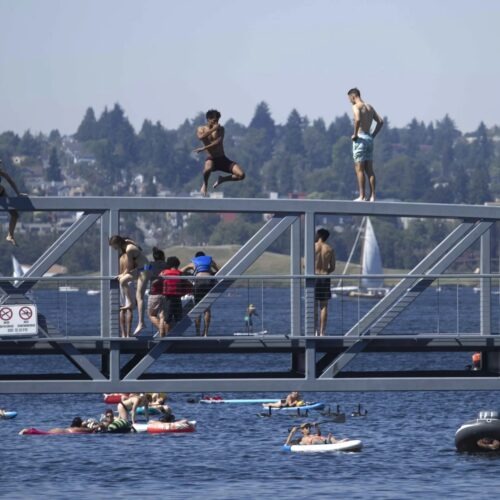 Cities were reminding residents where pools, splash pads and cooling centers were available and urging people to stay hydrated, check on their neighbors and avoid strenuous activities. The National Weather Service in Coeur d’Alene said this week’s weather “will likely be one of the most extreme and prolonged heat waves in the recorded history of the Inland Northwest.” Continue Reading From Seattle To Eugene To Tri-Cities To North Idaho, The Same Story: It’s Hot And Getting Hotter 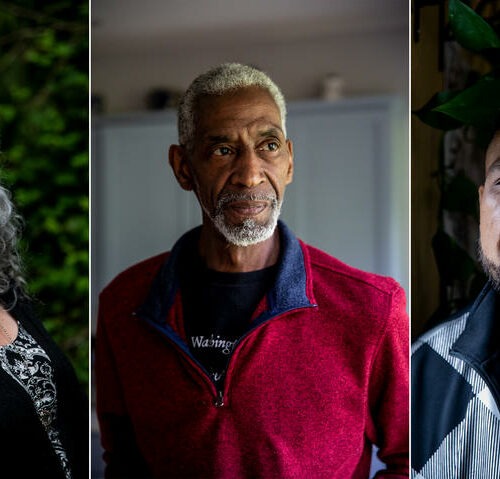 The state’s new accountability laws might not have happened without the advocacy of people whose family members were killed by police. Continue Reading 3 Washington Families On How New Police Laws Could Have Helped Their Loved Ones