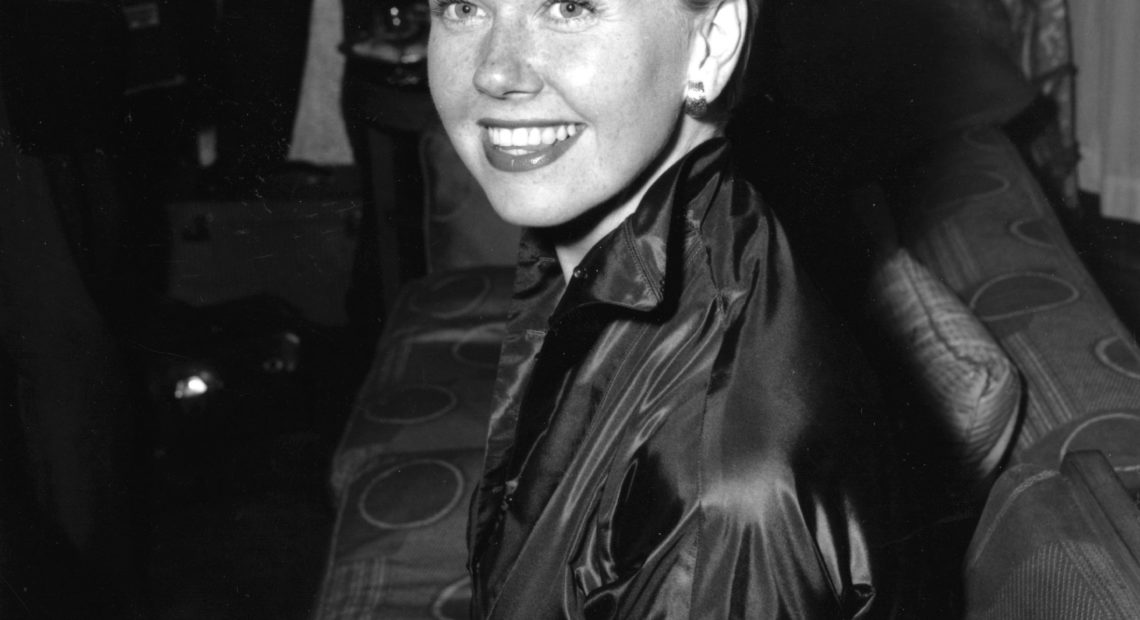 Actress and singer Doris Day made nearly three dozen films and more than 600 recordings. At the height of her career, she topped both the billboard and the box office charts. Day died of pneumonia on Monday at the age of 97.

Day remains one of the most successful female movie stars of all time. She embodied the “girl next door” even in her 40s, which is probably why her films with Rock Hudson were so successful. A scene from 1959’s Pillow Talk shows a split screen with Day and Hudson in their separate bathtubs, only it looks like they’re in the same one — with their feet touching. Kind of risqué for 1959. 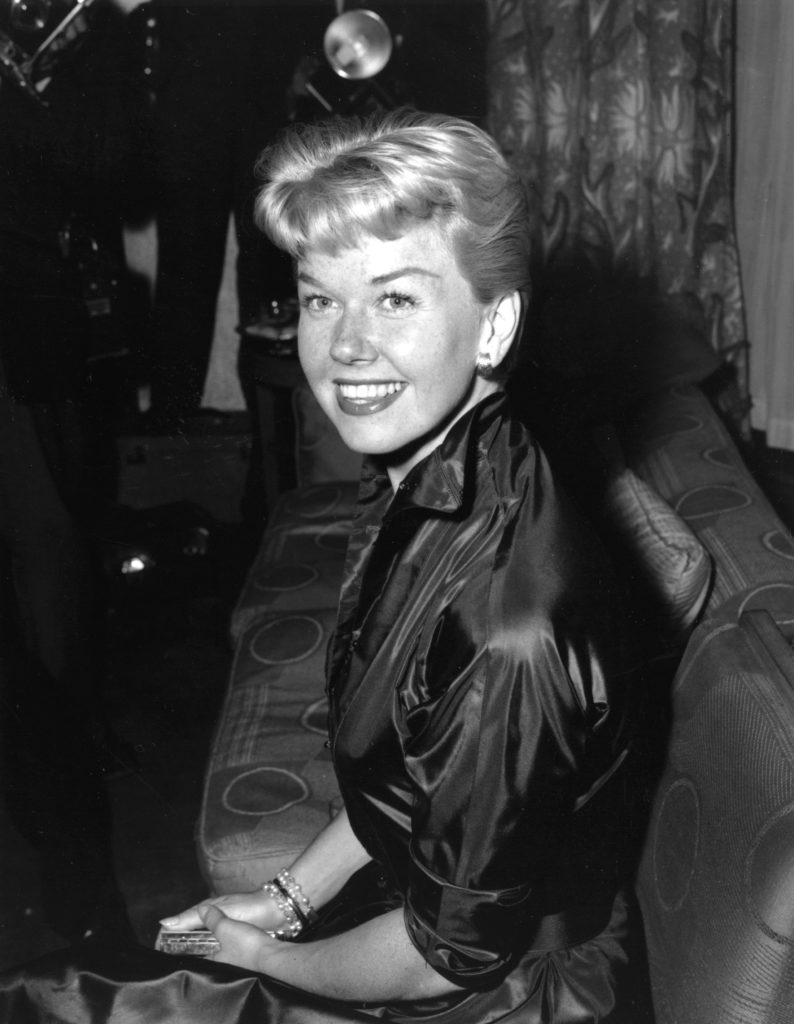 Day attends a reception at Claridge’s Hotel in London in 1955.

That was Day at the height of her film success, but her career began as a big band “girl singer,” and with Les Brown’s big band she had one of the biggest hits of World War II: “A Sentimental Journey.” For many GIs, Doris Day represented the kind of girl you’d want to fight for and come home to.

The end of the war brought the end of the big band era and the beginning of Day’s film career. Alfred Hitchcock used Day’s voice as a plot device in The Man Who Knew Too Much, in which a distraught Day sings a distress signal, “Que Sera, Sera,” to her kidnapped son. It became her signature tune and went to the No. 2 spot on the charts.

Will Friedwald wrote a book on jazz singing. He said Day’s success with pop and novelty songs overshadowed a simple fact: She was a phenomenal singer, both technically and artistically.

“She really is sort of the mother of all tuneful, sunny blondes,” he said, “but at the same time there’s definitely a dark side to her. You know, she can explore that kind of emotion very effectively in song.”

In the musical drama Love Me or Leave Me, Day played ’30s torch singer Ruth Etting opposite Jimmy Cagney, who plays her jilted mobster husband. And throughout the ’50s, Day took on similarly meaty roles in films like Calamity Jane, The Pajama Game and The Man Who Knew Too Much. But at the end of the decade, she settled into romantic comedies and a persona that would stick — the girl next door.

Norman Jewison directed Day in two films in the ’60s. He said her persona and her personality were able to attract men and women alike and were perfect for the times.

“She was a good girl,” he said. “She wasn’t snide. She wasn’t too smart. She brought a kind of an honesty and a freshness. And she was also strangely sexy.” 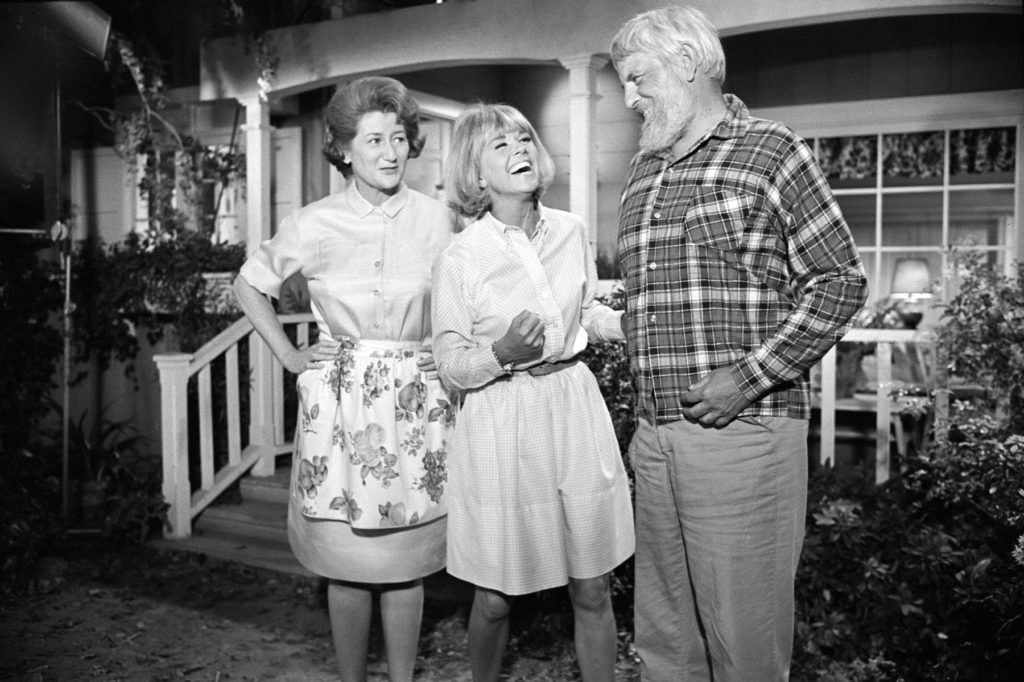 But David Kaufman, one of Day’s biographers, said the real Day was anything but the girl next door.

“She’s was a woman who was an extremely sensual woman,” he said. “She had affairs with a number of people. She was never happily married. She had a son but was never really a mother; he was more like a brother to her. She in many ways was the opposite to the girl next door.”

Day’s husband and manager, Martin Melcher, died suddenly in 1968. But before that, he lost her entire fortune and signed her to a television series without her knowledge. Day slogged through the five seasons of The Doris Day Show and then left Hollywood. And after a very long legal battle, she eventually won back some of her money.

Tabloids often caught Day doing simple things in retirement: going to the grocery store, caring for scores of abandoned pets or dining out with friends. And it seems if she couldn’t be the girl next door in her youth, as the years passed, she came close — sort of.