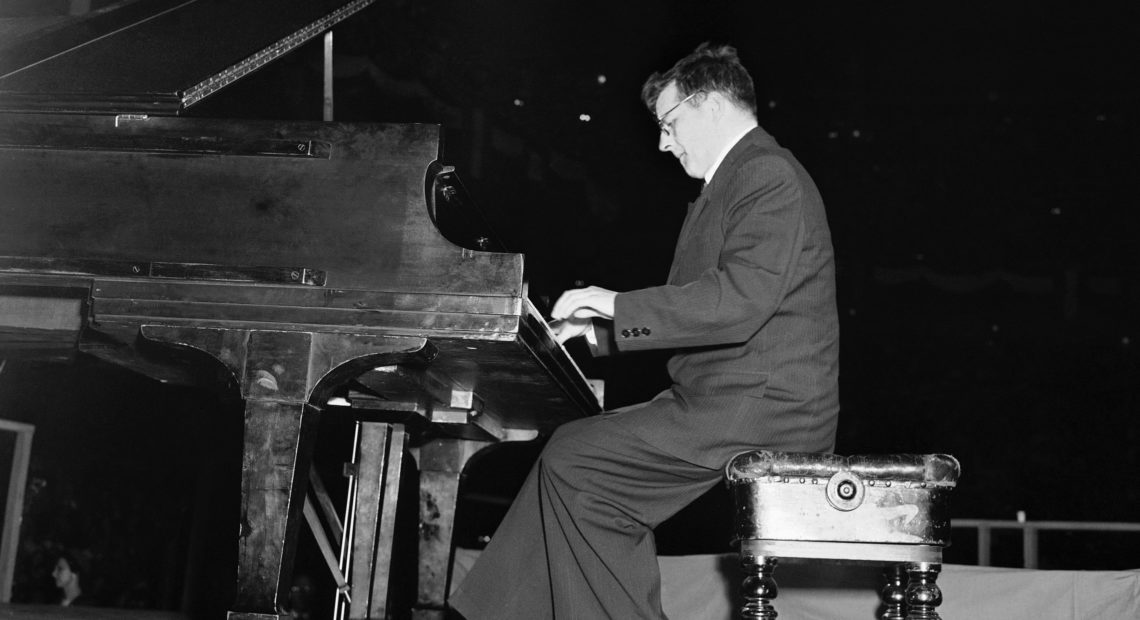 BOOK REVIEW: ‘How Shostakovich Changed My Mind’ Touches On The Music-Body Connection

PHOTO: Dmitri Shostakovich, Russian composer-member of the Soviet delegation to the Cultural and Scientific conference for World Peace, plays the second movement of his Fifth Symphony at Madison Square Garden in New York City on March 27, 1949. CREDIT: Marty Lederhandler/AP

years ago, a relative of mine used the term “music-intense” in conversation to describe a musician we both knew.

I think it’s also an apt descriptor for BBC music broadcaster Stephen Johnson. His remarkably diverse aesthetic and personal sensitivity are on full display in his new book How Shostakovich Changed My Mind.

Johnson’s primary focus is Dmitri Shostakovich’s music and how it relates to his personal struggle with mental well-being and a challenging family dynamic. Almost right away, he addresses what I wondered when I first stumbled upon the book: Why Shostakovich, of all composers, to buoy him in troubled times? After all, the the 20th-century Russian composer who made his art under the Soviet shadow — is best known for music that is often grim, intense, brooding, knotty, and heavily serious, though, it should be said, not without many moments of humor and formal nose-thumbing.

Johnson writes candidly about how Shostakovich took him to places inside himself that were seemingly impossible to access without music. It was the complex dark passion of so much of Shostakovich’s music that made that difference for him. And he’s not the only one. He relates that as part of a trip to Russia to make a radio documentary for the centenary of the composer’s birth; he interviews Viktor Kozlov, a clarinetist and one of the few surviving members of the orchestra that originally performed Shostakovich’s epic Seventh Symphony in war-torn Leningrad in 1942, a work that became known by the city’s name. Johnson relates just how meaningful the performance was to beleaguered and brutalized Soviet citizens living under Nazi siege.

One would think that in the midst of war and deprivation, music would seem a luxury — but no. “In the Leningrad symphony,” Johnson writes, “Shostakovich had held a mirror up to horror, and reflected that horror back to those whom it had all but destroyed — and in response they had roared their approval, their delight, their gratitude to the composer for giving form to their feelings.” In giving form to feelings, music can move someone from emotional confinement to an abiding sense of belonging — in war and in peace.

Johnson advances his thesis of music’s personal and communal appeal via the English philosopher Roger Scruton, who once wrote that “where other composers say ‘I’ in their music, Shostakovich says ‘We.'” To go from ‘I’ to ‘We’ requires listening, careful listening, one of the most neglected of skills. Listening is healing, one could say. Paul Robertson, the late musician who was the first violinist of England’s Medici Quartet, has a semi-prominent place in the book, and his thoughts on music and healing are worth reading:

“The thing that the composer can do, and certainly the music can do, is give you a kind of ladder outwards from somewhere very extreme and painful…it gives an element of what I think in medical circles you’d call the ‘locus of control’, in other words, you can externalize your own feelings, you can observe them, you can make change, or at least realize that change is possible. You can see from the painfulness that actually something beautiful, something creative, has occurred, and that of course begins to give it meaning. And if there’s one thing I think about the human condition it is that all things are bearable if they have meaning.”

The foregrounding of Shostakovich’s specific musical works — mostly symphonies and string quartets — helps the book keep its proper focus. And I’m please to say that works get concise, thoughtful treatment that don’t drown the lay reader in abstruse technical analysis.

For example, Johnson analyzes Shostakovich’s difficult and formally daring Fourth Symphony and his searching and powerful Symphony No. 5 in compelling formal, biographical, and personal terms. Same goes for the famous String Quartet #8 in C Minor, which he, I think, rightly suggests captures the depths, suffering, and compositional brilliance of Shostakovich unlike almost any other work — partly due to the composer’s brilliant use of a self-referential motif of four notes: D-E flat-C-B — which, in German musical notation, corresponds to letters in his own name: D. Sch. The composer used this musical motif to create the effect of what could be many things: unsettled inwardness; political disillusionment; acute despair; reflection. Johnson’s especially good at balancing the technical and thematic aspects of the music while situating them within the composer’s body of work.

Frankly, I found the book’s brevity regrettable at times. Its essayistic approach to a great composer’s work and a story of personal struggle could have been much more expansive in scope. Reading Johnson’s writing on his own struggle with bipolar disorder, his fraught relationship with his mother, or Shostakovich’s music, I found myself wanting more. When he considered insights from philosophers and writers, I wanted more again.

I just found his perspective palpably humane, sensitive, and breathably erudite — not a common thing. Because of that, I wanted him to keep on writing, to keep on plumbing the depths of Shostakovich’s music, of psychology, of philosophy, of himself. But ah well. How Shostakovich Changed My Mind is still a deeply felt and well-considered work — and anyone who cares about music, the mind, or personal struggle can learn from its depths, no matter how highly concentrated those depths may be.

Nicholas Cannariato is a writer and editor based in Chicago.