Worker At Hanford Contaminated In Lab Scheduled For Demolition

A worker at the Hanford Nuclear Site was recently contaminated with a speck of radioactive material after work in a lab building scheduled for demolition.

It’s all happening at what’s called the 324 Building at Hanford, not far from Richland, Wash., in a research lab that worked with radioactive materials. There’s been a large radioactive leak into the soil beneath the lab — mostly cesium and strontium. The lab’s being prepped to get at that contaminated soil, and then demolish the building.

The worker was contaminated March 28. Hanford officials say a tiny “speck” of contamination was found on the person’s pant leg. The contamination was lifted away from the worker’s protective clothing with tape. How it got there in the first place is still a question. The U.S. Department of Energy and its contractor CH2MHill Plateau Remediation Company haven’t said whether the incident is under further investigation.

In another event at the lab, Strontium 90 was found earlier in March when workers began driving “micropiles” into the floor in of one of the lab’s rooms, called the B Cell. When workers drove down enough to hit contaminated dirt under the floor, they found contamination in the room where they were working. They were all wearing protective clothing and breathing equipment, the internal Energy memo says. 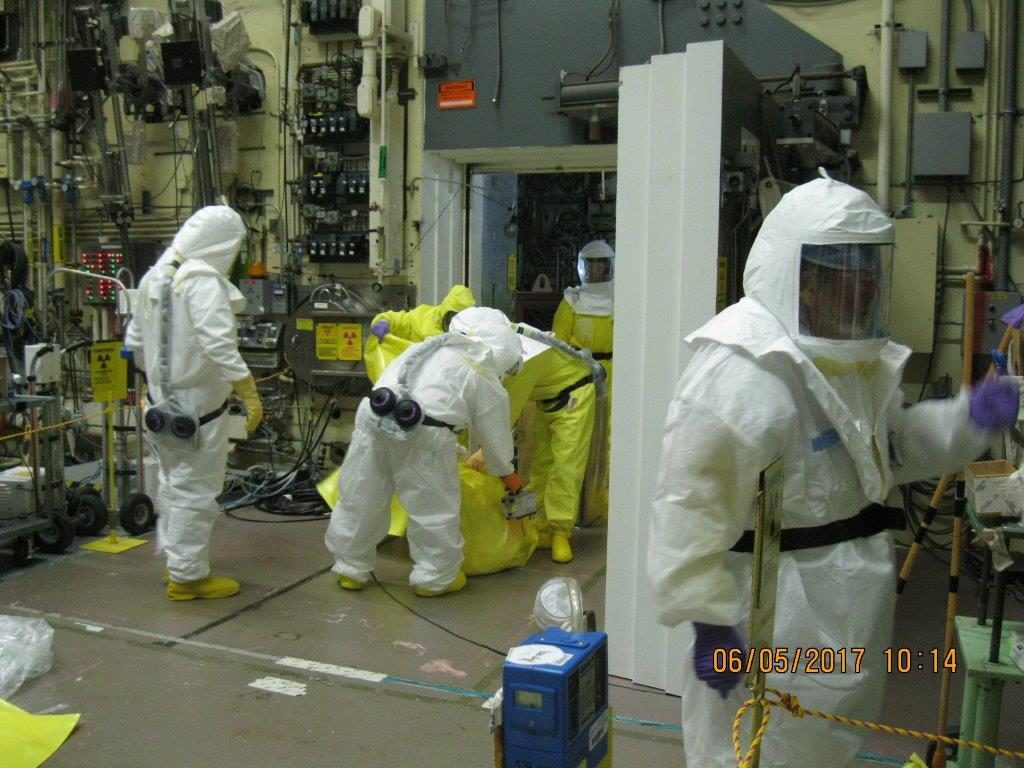 File photo. This 2017 photo provided by Hanford officials shows the area where the contamination occurred. Courtesy U.S. Dept. of Energy

Work was stopped for a bit, and more controls were put in place to reflect there was more beta contamination than first anticipated.

Operators didn’t find any contamination outside of these controlled work areas. And U.S. Department of Energy officials say they will continue to take a conservative approach to controlling contamination.

Just last year, dozens of other workers were contaminated at the Plutonium Finishing Plant — another demo site handled by this same government contractor.

Critics of Hanford and the Energy Department say they’re worried. Tom Carpenter, of Seattle-based watchdog Hanford Challenge writes, “… neither the contractor nor the federal government chose to announce that anything had gone wrong with this project. The lack of transparency erodes trust and undermines the credibility of Hanford officials when they hide stuff like this.”

Strontium 90 is a common byproduct of uranium fission, with a half-life of 29 years. It’s a beta particle emitter. Which means when it decays it throws off energetic electrons, which can damage living cells in the body.

It’s most often found in spent fuel from nuclear reactors, or after a nuclear bomb detonates. It’s harmful if breathed in, ingested or when it comes in direct contact with skin. The element can migrate to the blood, and then seeks bone. Contamination in humans is most often found first through urine analysis.

“There are in the United States, no documented cases of cancer from Strontium 90 contamination,” said Darrell Fisher, a prominent Richland-based medical physicist.

Hanford Announcement on Wor… by on Scribd