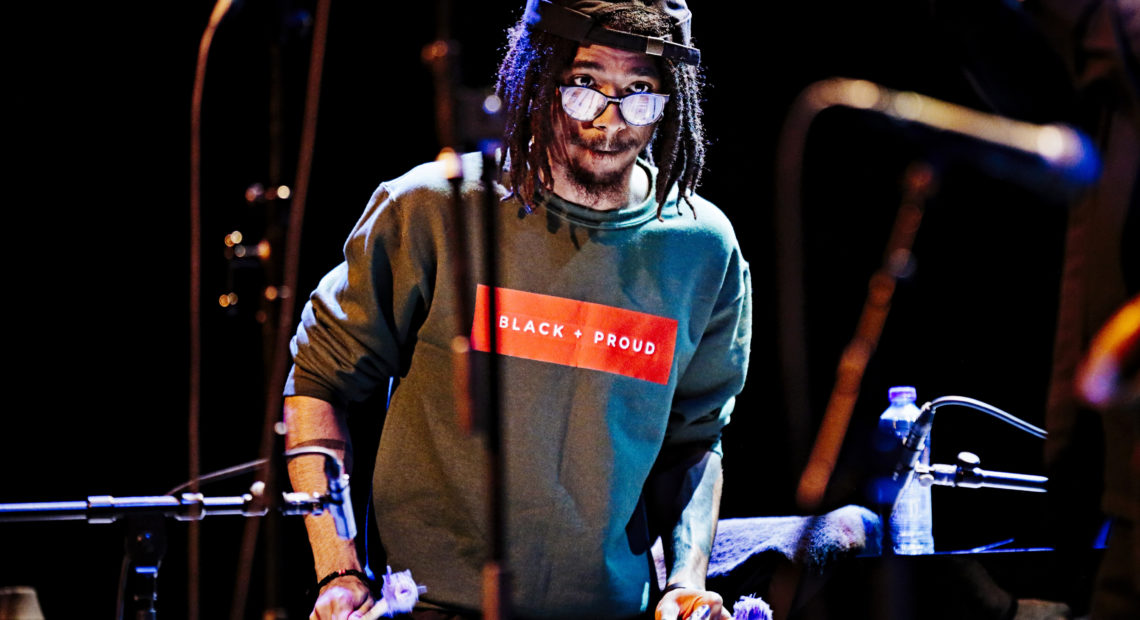 There comes a moment in almost any performance by vibraphonist Joel Ross when he seems to slip free of standard cognitive functions and into a bodacious flow state. Invariably, he’s in the midst of a heated improvisation. Maybe he’s bouncing on his heels, or bobbing like a marionette. His mallets form a blur, in contrast to the clarity of the notes they produce. The deft precision of his hammering inspires a visual comparison to some tournament-level version of Whac-A-Mole.

Ross, 23, has become the breakout jazz star of the moment partly on the basis of this volatile spark and its cathartic release. Last December, at a high-profile New York show by drummer Makaya McCraven, on whose album Universal Beings he appears, Ross took one solo that provoked the sort of raucous hollers you’d sooner expect in a basketball arena. Again, this was a vibraphone solo.

I first heard Ross at the start of 2016, months after he arrived in New York as a music student, and he made a strong impression even then. He was appearing during Winter Jazzfest with pianist James Francies, who had just been signed to Blue Note Records. I publicly stated my intention to keep them both on my radar. 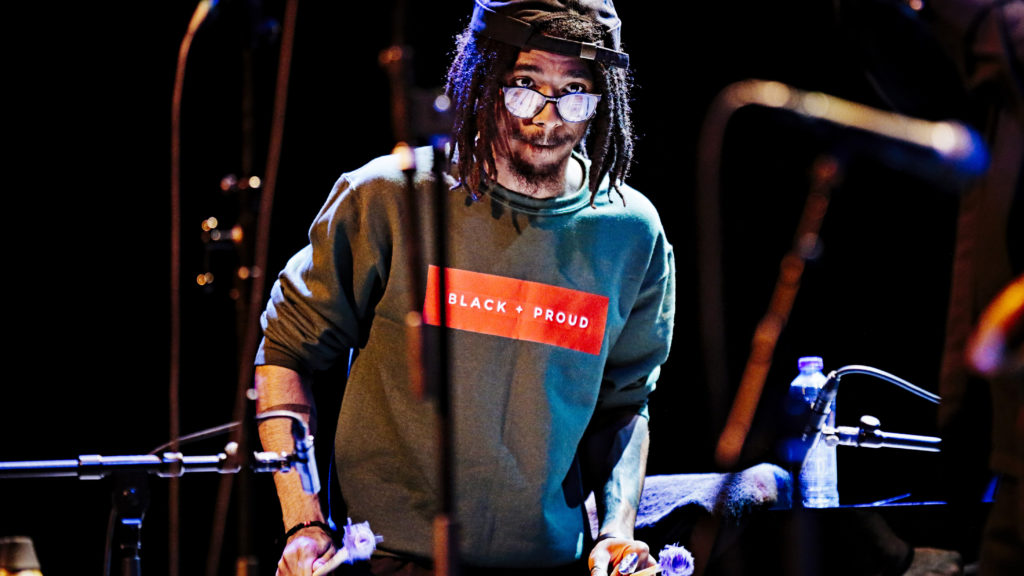 Joel Ross performs at Lantaren Venster on May 2, in Rotterdam, Netherlands.

Francies’ album, Flight, which features Ross, was released last year to just acclaim. Now Ross has released his solo debut on Blue Note, KingMaker, with the five-piece band he calls Good Vibes. A smart dispatch from a close-knit peer group — Immanuel Wilkins on alto saxophone, Jeremy Corren on piano, Benjamin Tiberio on bass, Jeremy Dutton on drums — the album also serves as an official marker of arrival for Ross, who’s had it coming for a while.

He has a slight build and a quiet demeanor, but exudes an untroubled self-confidence. “I’m kind of taking it as it comes,” he says of his surrounding buzz. “I feel like I’m fine.” We spoke one recent afternoon at The Jazz Gallery — a crucial hub for several generations of rising talent, including musicians in his immediate orbit, like saxophonists Melissa Aldana and María Grand.

Ross grew up on the South Side of Chicago, where both his parents were police officers. From an early age, he and his fraternal twin brother played drums in their Baptist church.

“He was the better drummer,” Ross says of his brother, “so that’s how I wound up playing the mallet instruments — xylophone, specifically, at first.” His evident talent on mallet percussion inexorably led him to the vibraphone, and to Chicago’s All-City Jazz Band.

Rhythm is still his first love, as you can hear throughout KingMaker. Many of his compositions begin with a vamp – a repetitive rhythmic motif – that his band can build upon or push against. The intricacies in the music tend to involve layers of counterrhythm, or sudden shifts of gear. But the ultimate aim, Ross hastens to explain, is to elide the feeling of a busy focus: “I’m trying to find a way to make all these modern irregular rhythms still groove and swing.”

At the same time, he has a strong attachment to melody. The vibes opened that world up for him — so I was surprised when Ross casually proclaimed it his least favorite instrument. “I have a love-hate relationship with the vibraphone; I’ve always been small, and it’s always been larger than me,” he says, laughing. “And it’s cold metal bars. It’s really hard to get expression out of it. That’s the challenge. So that’s how I come at it, as a challenge.”

KingMaker places Ross in a storied fraternity of Blue Note vibraphonists, from bebop pioneer Milt Jackson to post-bop paragon Bobby Hutcherson to turn-of-the-century dynamo Stefon Harris. Each has played a role in his development: Ross acknowledges Jackson as a core influence, and once made a pilgrimage to Hutcherson’s house in California. “He was telling me to write music every day, to write about life,” Ross recalls as if describing a visit with Yoda. “We looked outside, it was kind of overcast and he was like, “You can write about this.’ ”

But it was the tutelage of Harris — who, about 20 years ago, rode in with similar momentum — that proved most pivotal. Harris was the artist-in-residence when Ross studied at the Brubeck Institute at the University of the Pacific, and they worked together not only on the finer points of vibraphone technique but also ear training, harmony and rhythm. 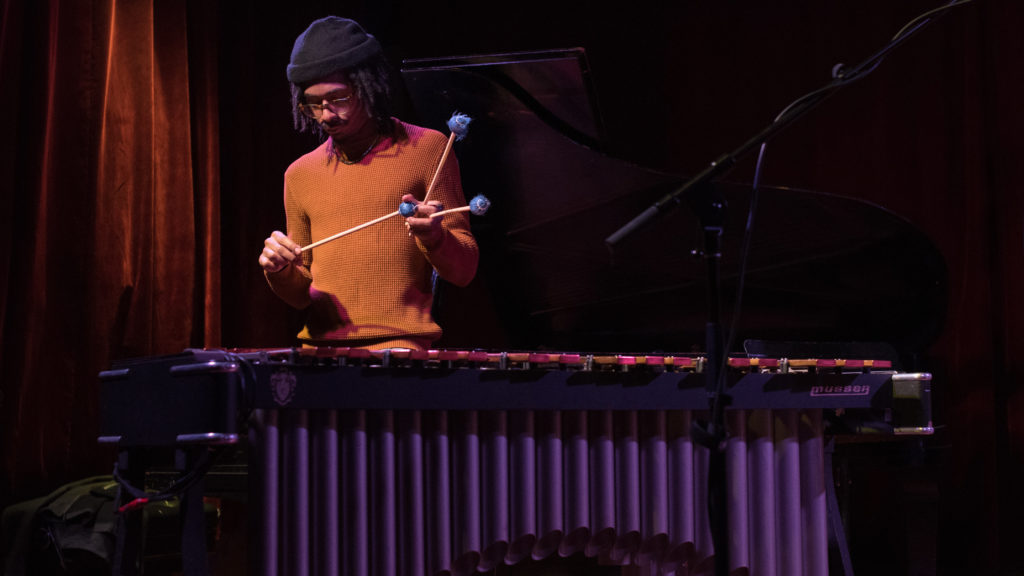 Performing at The Jazz Gallery in New York in Feb. 2018. CREDIT: Jonathan Chimene/WBGO

The vibraphone — with its motor, resonators and sustain pedal, and that grid of tuned aluminum bars — can suggest both a marvel of industrial engineering and a piece of gym equipment. There’s a useful tension in the ambivalence Ross harbors for the instrument. “I feel like we should devote more time to our tone, the way horn players do,” he says. “Vibraphonists can often hold down the pedal too long, and then their notes run together. I want clarity, for the most part. So I do a lot of pedal tapping, half-pedaling. It’s nothing new, but I’m really specific about it.”

KingMaker captures that tactility, in places, but it’s not a vibraphone album first and foremost. Most of its songs are inspired by people in Ross’s life; his parents, his brother, a niece. He’s writing about life, as Hutcherson impelled him to do. And he has followed a similar impulse elsewhere, as in a longform 2017 Jazz Gallery commission, pointedly titled Being a Young Black Man. Just this week he presented another commissioned work, at Roulette in Brooklyn, with a quartet and an eight-piece ensemble called Parables. Ross calls this piece “Revelation,” describing it as “a collection of composed and improvised music inspired by a reflection of self.”

That earnest interiority is a Ross hallmark, for those who have been paying close attention. It’s one reason McCraven, the drummer and producer, named an album track “Young Genius” in the vibraphonist’s honor.

Last month Ross played another gig with McCraven, back home in Chicago. Footage of a vibes solo on “Young Genius,” posted by photographer Kristie Kahns and embedded above, captures his spirit perfectly.

Watching the clip, it’s easy to be struck by the terms of Ross’ engagement with the vibraphone: all that kinetic magnetism, all that strength in his sound. But it’s also easy to picture a world beyond the notes. The bright future stretching before Ross has as much to do with that emotional expression as anything that happens between his mallets and those metal bars. But it’s also inextricable from that contact, and Ross is perceptive enough to walk the line.