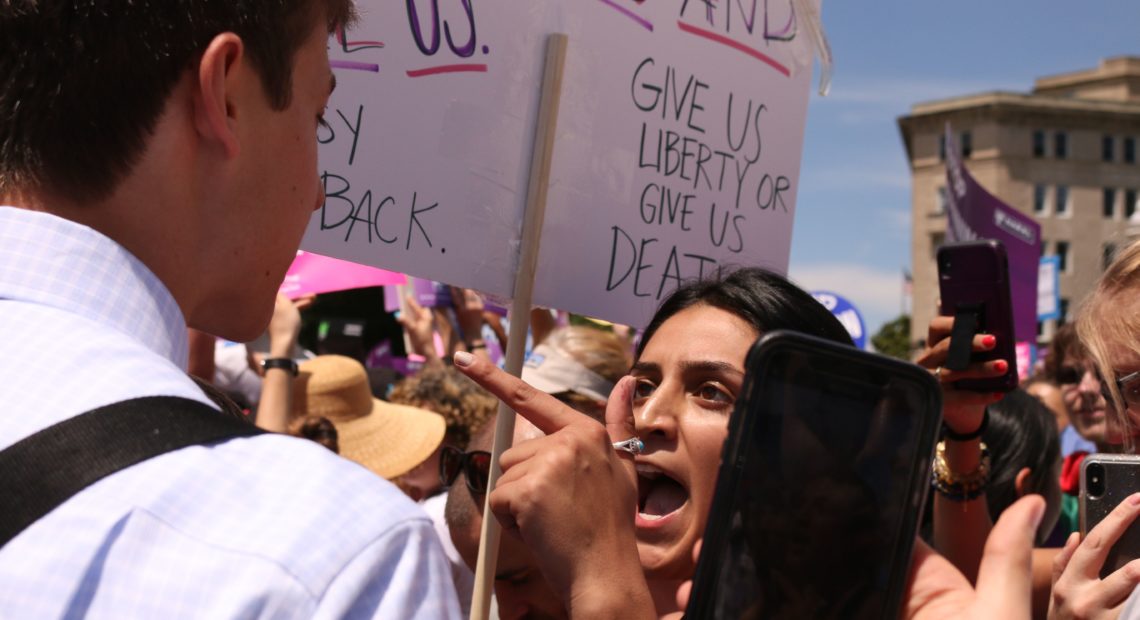 The Supreme Court is leaving in place part of an Indiana law that mandates that aborted fetuses be buried or cremated.

The court did not take up a second part of the law that banned abortions because of fetal abnormality, the fetus’ race, sex or ancestry. A lower court struck down that part of the law in addition to the burial provision. The Supreme Court, though, said it will wait for other lower-court rulings before weighing in on the fetal characteristics provision. 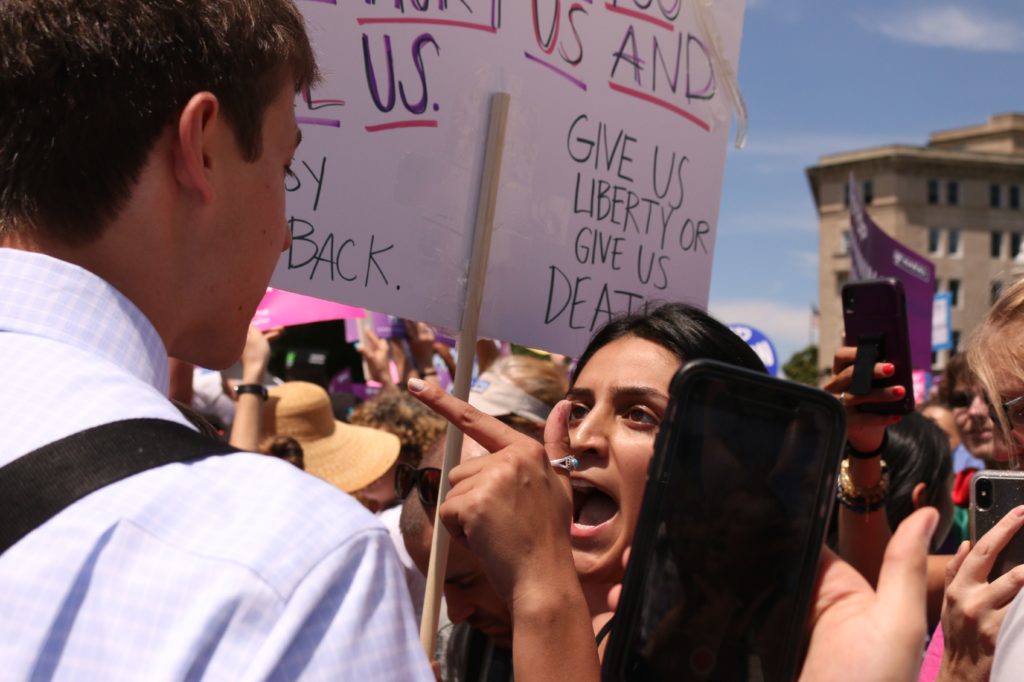 An abortion-rights supporter argues with an anti-abortion-rights protester in front of the U.S. Supreme Court on May 21 during demonstrations in defense of abortion rights. CREDIT: Anna Gassot/AFP/Getty Images

Vice President Pence signed the legislation when he was governor.

Justice Clarence Thomas wrote a 20-page, anti-abortion-rights concurrence, warning that by leaving in place a lower-court decision that invalidated Indiana’s law banning “discriminatory” abortions,” the court was aiding and abetting the possibility of a modern eugenics movement.

“This case highlights the fact that abortion is an act rife with the potential for eugenic manipulation,” he wrote. “From the beginning, birth control and abortion were promoted as means of effectuating eugenics.”

He pointed to sky-high rates of abortion for fetuses in Iceland and Europe diagnosed in the womb with Down Syndrome.

“Although the Court declines to wade into these issues today,” Thomas concluded, “we cannot avoid them forever.”

Tuesday’s unsigned opinion in the Indiana case appeared to be a compromise that allows the court to tread water on abortion for now. It preserves the status quo, and indeed, even allows for a possible challenge to the burial and cremation provision of the law on different grounds in the future. Justices Ruth Bader Ginsburg and Sonia Sotomayor would have struck down both provisions of the law.

Essentially, the high court is punting here on the issue of abortion to keep it out of the court — for now. But it’s sure to come back.

Still sitting on the docket is a lower-court ruling blocked by the high court earlier in the term on a 5-to-4 vote, with Chief Justice John Roberts joining the court’s four liberal justices.

At issue is a Louisiana law that is nearly identical to a Texas law the court struck down just three years ago. The law requires doctors who perform abortions at clinics to have admitting privileges at a nearby hospital.

In 2016, the court said that the same kind of provision in Texas did nothing to promote the health of women seeking abortions, but did impose needless barriers on abortion providers, leading to half of them being forced to close their doors.

Without comment, the court also left in place a lower-court ruling that went in favor of the Boyertown, Pa., school district that lets some transgender students use bathrooms and locker rooms that they choose, matching their gender identity. More on the case.

The court also will take up cases together about whether families of Mexican immigrants killed on foreign soil (Mexico) by U.S. agents at the border can sue in the U.S. The cases are out of Texas and Arizona and will not be argued until at least October, when the new term begins.

This is the third time the court has taken up a cross-border shooting case. More on the case.

Opinions of the court: Probable cause is enough

There are about a dozen major cases the court is set to decide on by the end of June, but the court did not rule on any of those Tuesday. It did issue one ruling that essentially said if there’s probable cause for an arrest, that’s good enough, and someone cannot sue if they think they were arrested in retaliation for exercising their first amendment rights.

The case stemmed from the arrest of Bartlett P. Russell, during “Artic Man,” a week-long winter sports festival held in the remote Hoodoo Mountains of Paxson, Alaska. As Chief Justice Roberts described the event: once a year, 10,000 people descend on the area for the event, “known for both extreme sports and extreme alcohol consumption.”

On the last night of the event in 2014, two policemen arrested Russell. They claimed the cause was his belligerent and combative actions. He claimed they were retaliating against him for his refusal to speak to the police at a drunken party earlier in the day. And he sued for violation of his First Amendment rights.

But, on Tuesday, the Supreme Court ruled that when police have probable cause for an arrest, they are generally immune from such suits. The court did say, however, that there is an exception — in cases of minor offenses, such as jaywalking, where arrests are rare at best, a retaliatory arrest claim can proceed under certain circumstances.

Justices Thomas, Ginsburg, Neil Gorsuch and Sotomayor dissented in whole or in part. All agreed that when police have probable cause to arrest, the arrest is presumed valid, except in certain circumstances.

But they didn’t agree on the circumstances.