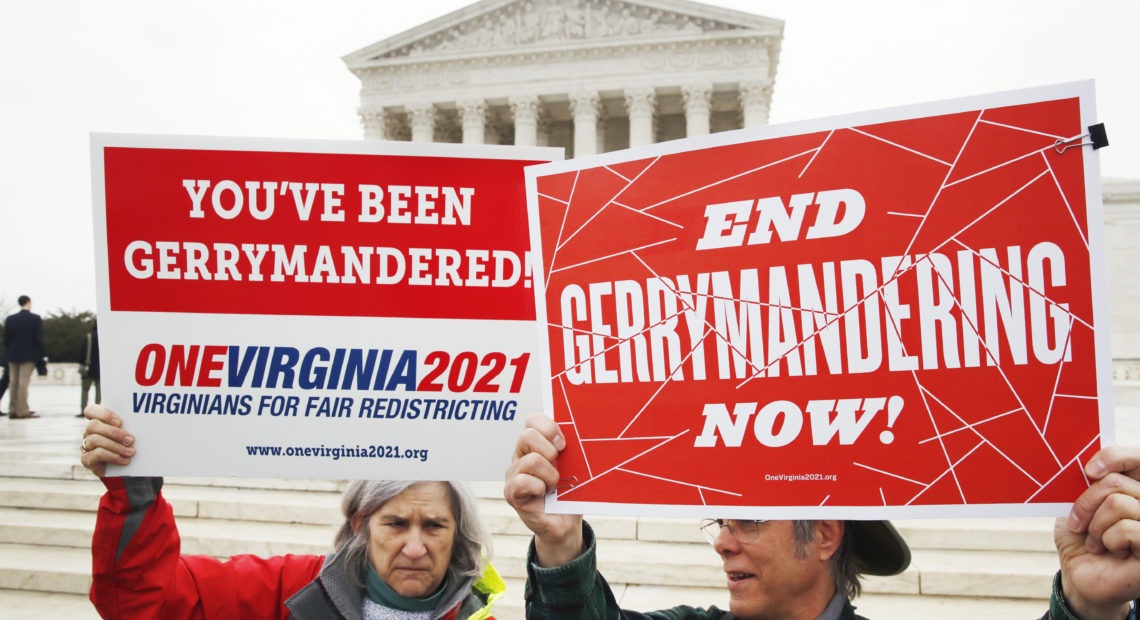 PHOTO: Sara Fitzgerald (left) and Michael Martin, both with the group One Virginia, protest gerrymandering in front of the Supreme Court in March. CREDIT: Jacquelyn Martin/AP

Legislative districts in Virginia that the Supreme Court previously said were racially gerrymandered have to remain in their redrawn form, the court said Monday, giving Democrats in the state a victory.

The majority decision was written by Justice Ruth Bader Ginsburg, who noted that because the entirety of state government wasn’t suing to keep the fight going — the case was brought by the state’s GOP-controlled House — then it is throwing the case out.

“In short, Virginia would rather stop than fight on,” Ginsburg wrote. “One House of its bicameral legislature cannot alone continue the litigation against the will of its partners in the legislative process.”

The court previously decided that 11 districts in the state were sorted by race and they had to be redrawn. They were redrawn, and then the state’s GOP-controlled House intervened to take it to the Supreme Court.

The case was 5-4, but not along the usual conservative-liberal lines. Instead, the majority in this case was Ginsburg with liberal justices Sonia Sotomayor and Elena Kagan, as well as conservatives Clarence Thomas and Neil Gorsuch.

For the number of cases remaining, the court appeared to be clearing out the underbrush Monday. It decided four cases, and none of them in a major way. It also punted a controversial Oregon cake-shop case — dealing with gay rights vs. religious freedom — sending it back to a lower court.

And it did nothing yet on Trump administration appeals of lower-court rulings that his administration violated the law on DACA, Deferred Action for Childhood Arrivals. The court could deal with it by the end of the term, possibly next week.

This now leaves 20 undecided cases — 11 of which could be major decisions — and just one scheduled decision day remaining: June 24.

The court’s schedule, however, is all but certain to change, adding more decision days next week.