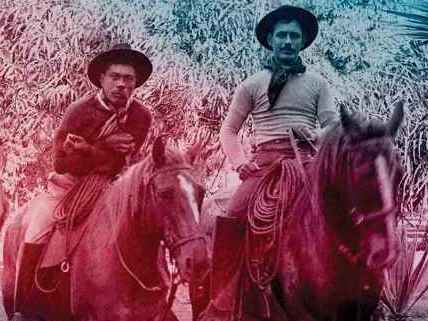 Few vocations have been more revered in American popular culture — more romanticized — than that of the cowboy.

They ride purebred stallions through arid sagebrush flats and carry a six-shooter on both hips. They spit tobacco juice with scandalous accuracy. They wear long spurs and leather chaps and possess a moral compass rigid as their cast-iron skillets. They’re also, apparently, white — or so the dime novels and spaghetti westerns would have us believe.

White and male and unquestionably American.

Those who earn their living raising cattle today are often the first to mock the showmanship of the Hollywood cowboy — the job is far too demanding for whimsy — but fewer may be ready or willing to dismiss the notion of their calling as a quintessentially American (specifically euro-American) pursuit. Fortunately, the origin of the cowboy has come under greater scrutiny over the last few years, and popular culture is slowly catching up. 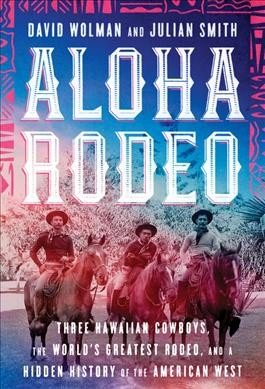 Aloha Rodeo
Three Hawaiian Cowboys, the World’s Greatest Rodeo, and a Hidden History of the American West by David Wolman and Julian Smith

Dom Flemons’ Grammy-nominated album “Black Cowboys,” for example, released last year and now number four on the Billboard bluegrass charts, calls attention to the many former slaves who participated in the great cattle drives after the Civil War. And the National Cowboy Poetry Gathering, one of the largest celebrations of the cowboy west, regularly highlights minority influences on today’s ranching culture. After all, the term “cowboy” is a direct translation of the Spanish term “vaquero,” and “buckaroo” likely a corruption of the same.

Now comes Aloha Rodeo: Three Hawaiian Cowboys, the World’s Greatest Rodeo, and a Hidden History of the American West, to further buck — at least to pluralize — our clichéd notions of the American cowboy. Co-authored by journalists David Wolman and Julian Smith, both contributors to a slew of national magazines, Aloha Rodeo chronicles the history of a surprisingly large cattle trade on the Hawaiian Islands and profiles a number of “paniolos” every bit as tenacious and resourceful as their mainland cohorts. In a wholly effective maneuver, the authors follow these Hawaiian cowboys from the volcanic slopes of their home turf to Cheyenne, Wyoming — once nicknamed the “Holy City of the Cow” — where they competed in the Frontier Days rodeo, the world’s largest, in 1908. The old axiom — often attributed to novelist John Gardner — claims there are only two plots: a person goes on a journey, or a stranger comes to town. But in Aloha Rodeo, a slim and swift read, Wolman and Smith juggle both to often thrilling effect.

“What the press, spectators, and other competitors didn’t know…was that ranchers in Hawaii had been breaking horses, roping wild bulls, and herding thousands of cattle before anyone in the American West,” they write. “These men, like their fathers and grandfathers, made their living doing exactly what all the other contestants did: they were cowboys. Paniolo, in Hawaiian. Damn good ones at that.”

To be certain, this is hardly an exhaustive text; the history is limited to a few key players and fueled first and foremost by narrative. Those rare scholars looking for a complete history of the cattle trade in Hawaii should probably look elsewhere. But for the rest of us greenhorns, Aloha Rodeo is a gripping primer. The book begins in February 1793, when George Vancouver, captain of the HMS Discovery, unloads his first shipment of 10 black longhorn cattle on Hawaii’s northwest coast — a “gift” for King Kamehameha, but more importantly, “a cultural and economic tether” to a Great Britain still aggressively adding to the “Crown’s portfolio of properties.”

Kamehameha forbid the killing of his cattle, leading to both the glorification and proliferation of the longhorn. By 1830, nearly 20,000 wild cattle — called “bullocks” — roamed the main island alone, pillaging gardens, hiding in forests and ravines, and posing a serious threat to the locals. As the authors casually remind us, “longhorns were the same breed of cattle that wranglers in Alta California would sometimes pit against grizzly bears for sport.” Meanwhile, the islands were drowning in debt to European and American merchants, and their main export — sandalwood — was near exhaustion. Before the paniolo, Hawaii’s “bovine nightmare” first gave rise to the bullock hunter.

“A musket was the bullock hunter’s essential tool, but he also caught the animals in carefully camouflaged pits, sometimes using natural holes created by collapsed lava tubes,” the authors write in one of many passages so alien to the uninitiated they read like fantasy. “A trapped bullock was much easier to shoot, but God help the man who slipped and fell in on top of it.”

But the mayhem continued mostly uninterrupted until the 1830s, when the King — now Kamehameha III — recruited roughly a dozen vaqueros from California, hoping they could teach his bullock hunters how to ranch and develop a valuable export for the islands. Replacing their rifles with rawhide lassoes, the hunters soon began roping cattle on horseback and leading them skillfully down the mountains. This new breed of Hawaiian rancher became known as the “paniolo,” and they faced hurdles unthinkable to their mainland counterparts. Lava fields. Camouflaged bullock pits. Dense forests. Massive thorns. Sharks? You better believe it. On trained “shipping horses,” the paniolo drove their cattle into the surf in order to reach the steamships anchored beyond the reef, where marine predators were often “nosing for steak tartare.” Aloha Rodeo shines most in these moments of wild contrast.

But the history is more than dressing here — it’s necessary context for the paniolos’ final showdown in Cheyenne. By the time Ikua Purdy, grandson of legendary bullock hunter Jack Purdy, and two of his dark-skinned paniolo cohorts from the island’s biggest ranch finally arrived in Wyoming, the United States had annexed Hawaii. But few considered the islanders American citizens, even fewer considered them serious rodeo contenders, and none considered these men with wildflowers in their hats the latest in a succession of cowboys far predating their own.

“To locals and tourists in Cheyenne, the paniolo were not just odd; they were interlopers,” the authors write.

The paniolos swept the competition, of course. But while Purdy, now the steer-roping world champion of the world, and the others rose to legendary status back home, “the first superstars of twentieth-century Hawaii,” the mainland quickly cut their memory loose, not quite ready to amend the status quo. Not until 1999, nearly a century later, was Purdy inducted in the National Cowboy & Western Heritage Museum’s Rodeo Hall of Fame. Wolman and Smith write:

“Just as the binary conceits of the American West — cowboy versus Indian, civilization versus wilderness, good versus evil — were crystallizing in the national psyche, along came a small posse from afar whose story pushed back against such simplistic thinking.”

Carson Vaughan is a freelance writer and author of Zoo Nebraska: The Dismantling of an American Dream.