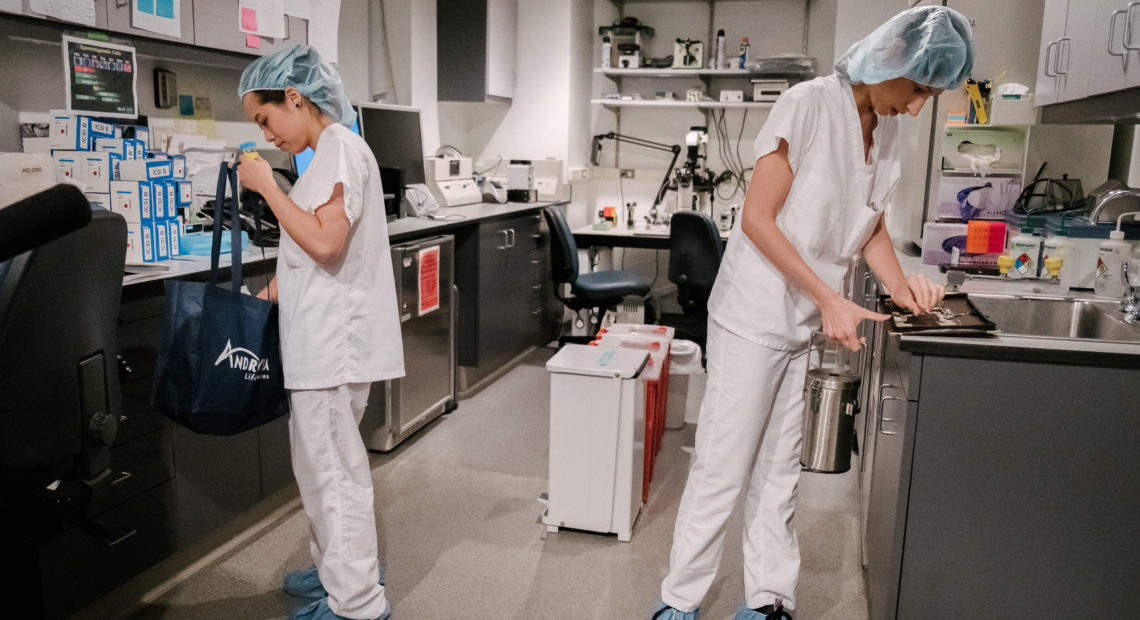 PHOTO: Wang and Alessandra Parrella, a Weill Cornell staff associate, are part of the team trying to use CRISPR to edit DNA in human sperm. They work at the Andrology Lab at the Center for Reproductive Medicine at Weill Cornell Medicine in New York City. CREDIT: Elias Williams for NPR

First it was human embryos. Now scientists are trying to develop another way to modify human DNA that can be passed on to future generations, NPR has learned.

Reproductive biologists at Weill Cornell Medicine in New York City are attempting to use the powerful gene-editing technique called CRISPR to alter genes in human sperm. NPR got exclusive access to watch the controversial experiments underway.

The research is aimed at finding new ways to prevent disorders caused by genetic mutations that are passed down from men — including some forms of male infertility. The team is starting with a gene that can increase the risk for breast, ovarian, prostate and other cancers.

The experiments are just starting and have not yet been successful. But the research raises many of the same hopes — and fears — as editing the DNA of human embryos. Nevertheless, the researchers defend the work.

“I think it’s important from the scientific point of view to investigate in an ethical manner to be able to learn if it’s possible,” says Gianpiero Palermo, a professor of embryology in obstetrics and gynecology at Weill Cornell Medicine, who runs the lab where the work is being conducted.

During a recent visit to Palermo’s Andrology Laboratory at Weill Cornell’s Center for Reproductive Medicine, NPR witnessed an experiment attempting to edit a single gene in sperm.

“If we can wipe out a particular gene, it would be incredible,” Palermo says. “Theoretically, in principal, this would be a major, major benefit to society.”

Other scientists who are not involved in the research agree. One of the main goals is to try to understand and possibly prevent male infertility caused by genetic mutations.

“Male infertility is a very common condition,” says Kyle Orwig, a professor in the department of obstetrics, gynecology and reproductive sciences at the University of Pittsburgh School of Medicine. “And there are some diseases that are incredibly devastating to families. And for those diseases, for me, if you could get rid of it, why wouldn’t you get rid of it?”

But others say editing DNA in sperm raises the same troubling questions as editing DNA in embryos. Would it ever be safe to make babies that way? Would it open the door to someone someday trying to make “designer babies”? Should scientists be trying to tinker with the human gene pool in ways that could affect generations to come?

“The concern is what kind of world are you creating as you move down the path to start manipulating human genetics. We’re on the cusp of prospective parents controlling the genetics of their offspring,” says Baylis, who wrote the forthcoming book Altered Inheritance: CRISPR and the Ethics of Human Genome Editing.

CRISPR enables scientists to make very precise changes in DNA. As a result, many scientists say the technique is revolutionizing scientific research. Doctors have already started using it to try to treat diseases, for example.

But a Chinese scientist stunned the world last year when he announced he had used CRISPR to create the world’s first genetically modified babies — twin girls whose DNA he edited when they were embryos to try to protect them from AIDS. The announcement was widely condemned as premature, reckless and unethical. 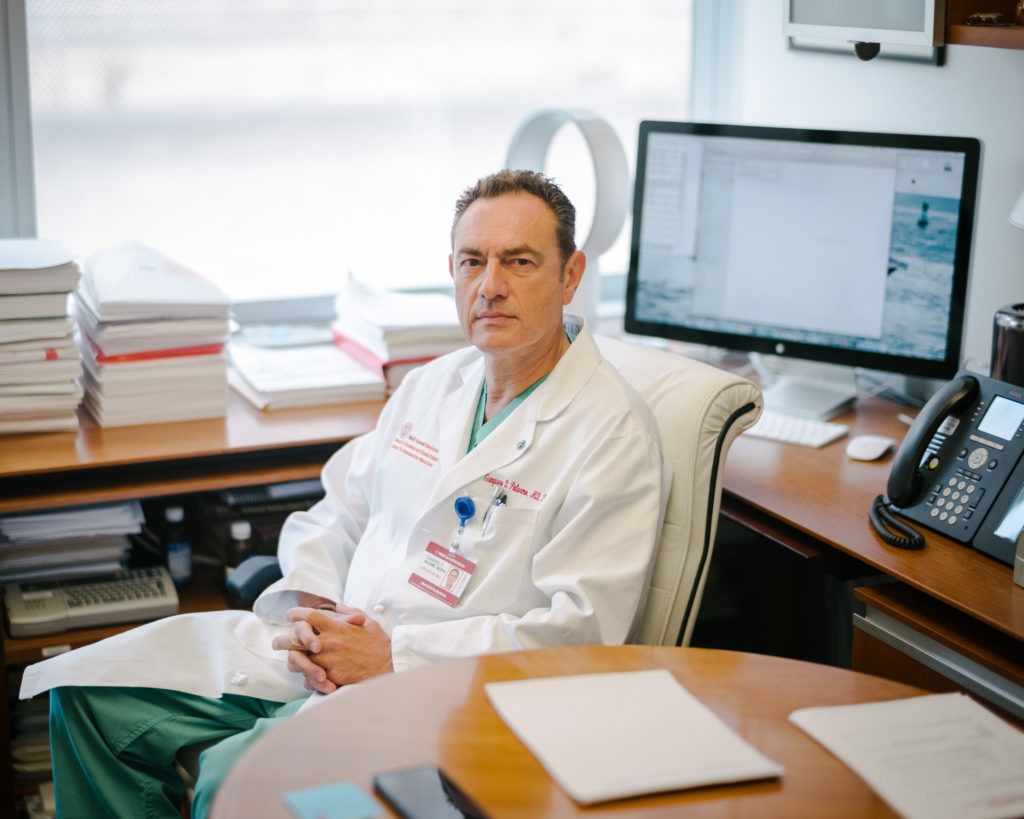 Gianpiero Palermo, a professor of embryology at Weill Cornell Medicine, runs the lab where scientists are trying to use CRISPR to edit genes in human sperm. CREDIT: Elias Williams for NPR

In addition to concerns that such a step may be unsafe for the resulting babies and future generations, critics say this kind of research is unnecessary because there are other ways to prevent most genetic diseases. Editing sperm, eggs or embryos also raises profound philosophical, moral and ethical questions that need to be addressed first.

“There’s reason to worry about undertaking the research before we’ve asked the question properly whether we would ever actually want to use those techniques,” says Ben Hurlbut, a bioethicist at Arizona State University in Tempe. “Once those techniques are developed, it becomes much harder to govern them. If you’ve done the hard work of developing the recipe, someone else can bake the cake.”

Theoretically, editing DNA in human sperm could be somewhat safer than editing DNA in human embryos, because in embryos it’s possible to inconsistently edit and miss certain cells, whereas in sperm any changes would be present in every cell of any resulting offspring. But the larger questions remain.

“I know that things can get dangerous and things can get kind of out of hand quickly,” says June Wang, a lab technician conducting the experiments in New York. “But on the other hand, I think that CRISPR can do so much. It has a lot of potential.”

This particular experiment is targeting a gene known as BRCA2. Mutations in this gene can increase the risk for breast, ovarian, prostate and other cancers.

“I have high hopes that we can have a huge impact,” Wang says.

During my tour of the facility to watch the experiment getting underway, Wang escorts me into a small windowless research lab, after punching a keypad on a large door.

I watch as Wang and a colleague snap open the latches on a frosty silver canister, pop off the lid and slide out a small vial. It contains 58 million sperm purchased by a woman for in vitro fertilization and then donated for research after she had completed IVF.

The sperm samples are frozen in liquid nitrogen. After carefully thawing and preparing the sperm, Wang puts millions of sperm on a slide under a microscope to make sure they are healthy.

“It looks really good,” she concludes after examining the specimen.

The key challenge to editing DNA in human sperm is finding a way to deliver the microscopic CRISPR gene-editing tool to the DNA. The problem is that DNA is packed very tightly inside the head of each sperm, making it difficult to insert the CRISPR tool. That makes many scientists wonder whether it may even be possible.

“I think it will be very difficult to do,” says David Albertini, editor of the Journal of Assisted Reproduction and Genetics and a visiting scientist at Rockefeller University in New York City.

Wang and Palermo acknowledge that it will be a challenge, but they remain hopeful.

“Nobody’s tried to do CRISPR on sperm before, so we have to try to figure out the right way to do it,” Wang says.

A potential solution involves a process known as electroporation, which involves delivering an electrical shock to cells.

“The hope is that the shock will cause the sperm to kind of loosen up a little bit for just a moment,” Wang says. “When the cell loosens up, the CRISPR gene-editing tool will hopefully get inside.”

Wang carefully fills a vial with sperm and then drips in a solution containing the CRISPR tool, which in this case has been designed to target BRCA2. She then places the mixture inside the electroporation machine, which will deliver an 1,100-volt shock.

“It’s kind of a weird concept,” Wang acknowledges. “But it works pretty well.”

After the sample is in place, Wang presses a button on the machine, which emits a few quiet beeps.

“That is it,” she says. “I just zapped all the sperm. Hopefully the CRISPR materials got in there.”

She repeats the process two more times and then places the treated sperm samples into an incubator. In 24 hours, she will analyze the samples for any signs the editing worked.

“I’m really hopeful we’ll be able to get it. It’s just going to be a lot of work, a lot of testing and a long time, just because this hasn’t been done before,” she says.