‘The Only Plane In The Sky’ Offers A Powerful, Graphic Narrative Of September 11

One of the more jarring moments of parenthood came when I did a simple math problem. My son was born 17 years after the Sept. 11 attacks. So what, I wondered, would the historical parallel be for me compared with him?

That is to say, what major news story had happened 17 years before I was born, and how immediate or distant did it feel to me?

The rough equivalent, I discovered, was the assassination of Martin Luther King Jr. In other words, for him, Sept. 11 will likely feel like ancient history. Something to think about and be sad about, but something that nevertheless lives in books and documentaries. 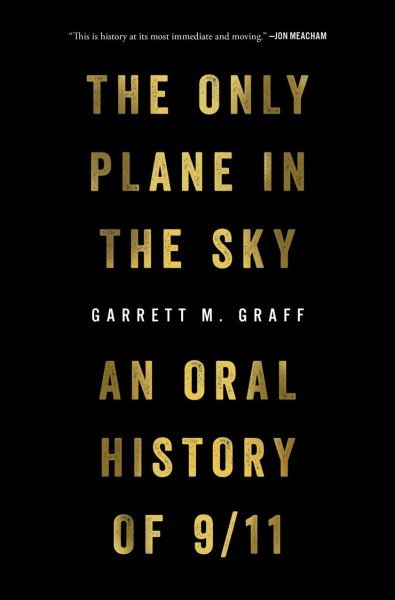 The Only Plane in the Sky
An Oral History of 9/11
by Garrett M. Graff

That idea is likely incomprehensible to any adult who lived through the attacks, even if their experience was that of a passive television watcher. Like so many other people, I can still remember exact moments, exact feelings, from that day. But for millions and millions of Americans — even people now serving in the military and going to college — Sept. 11 was something that happened before they were born.

The passage of time has led to a new wave of books aimed at preserving and telling the story of Sept. 11 itself. Not a broad history of terrorism, or what happened in America before and after Sept. 11, but the terror and the confusion and the raw emotional collapse of the day itself. Among the most powerful entries in this new canon: The Only Plane In The Sky, a visceral oral history of the attacks written by Garrett Graff.

The book grew out of an article that went viral that Graff wrote for Politico magazine about the experience of those aboard Air Force One on Sept. 11, as it skipped from Florida to Louisiana to Nebraska before finally returning to Washington. Tapping an existing oral history project and conducting his own research — and working closely in the process with oral historian Jenny Pachucki — Graff has weaved a powerful, graphic narrative of how Sept. 11 played out everywhere from the International Space Station to the inside of the collapsing World Trade Center towers.

The book vividly recounts the most upsetting and totemic moments of the day: the voicemails passengers on the doomed flights left for their families; the people who jumped from the top floors of the burning towers, in a desperate attempt to escape the heat and smoke; the decision by President Bush and Vice President Cheney to order fighter jets to shoot down commercial aircraft, if they had to.

It also tells stories that, while massive in scope in their own right, were drowned out by the enormity of the day. I had never fully appreciated how large the marine evacuation of lower Manhattan was, and how the water taxis, Coast Guard ships and private boats rivaled World War II’s Dunkirk evacuation in their sheer numbers. The same goes for the effort to land every airplane in the United States on short notice, and what it was like for passengers in non-hijacked planes to learn about the attacks midflight, or to suddenly find themselves stranded in Newfoundland.

One of the more striking story arcs within the book — and one of the few stories here with a happy ending — is that of Louise and Pasquale Buzzelli. Pasquale worked in the north World Trade Center tower and had spoken to his pregnant wife on the phone shortly before it collapsed. Knowing her husband hadn’t made it out, she assumed she had watched him die on live television when the building went down. He somehow was pulled from the rubble alive and called her later in the day to tell her the news. The only time I laughed reading this book: when Louise recounts how her Italian mother-in-law greeted Pasquale when he finally got home that night. “You must be hungry! Sit down, I want to make you a nice sandwich!”

That anecdote aside, make no mistake about it: The Only Plane In The Sky is brutal, emotionally wracking reading. I repeatedly cried. I could feel my pulse elevate. I often had to put it down after a dozen pages.

But I think that’s the point of the book. Sept. 11 was terrible and confusing, and the more time passes, sometimes the harder that is to remember. No matter how much we try to describe those feelings to children who didn’t live through them, something will be lost in the translation and telling.

This book captures the emotions and unspooling horror of the day. It will be a good text to hand to a curious teenager when he one day asks: What was Sept. 11 really like?