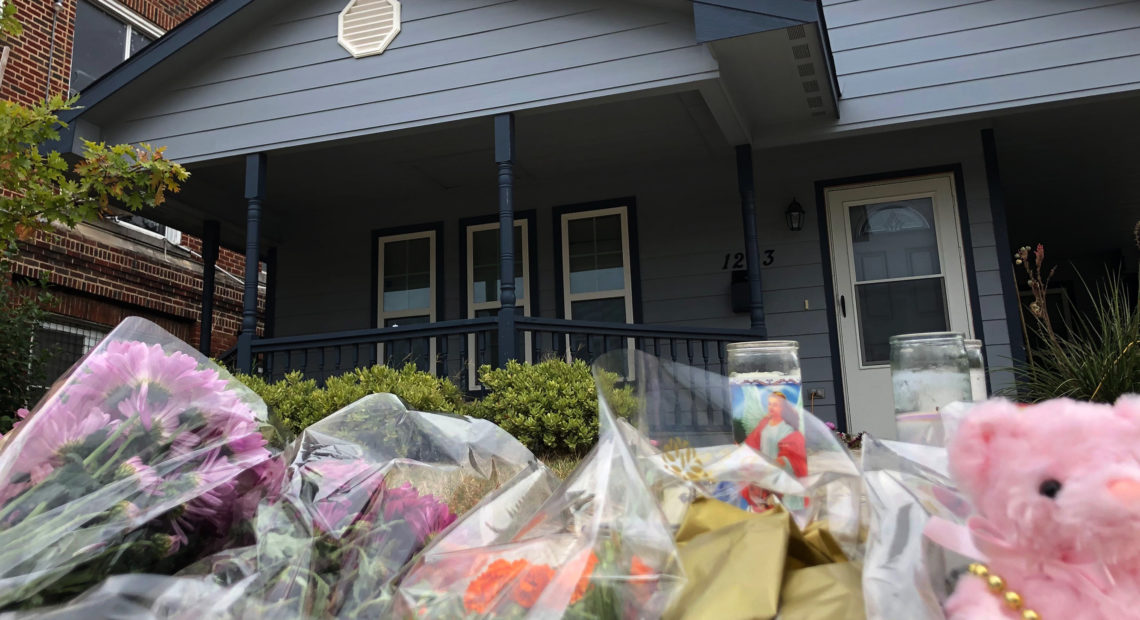 Like a lot of young women her age, 28-year-old Atatiana Jefferson had a date Friday night — but unlike many of her peers, Jefferson’s date was with her 8-year-old nephew. They were enjoying a heated video game that went into the early hours of Saturday when police arrived at the house Jefferson shared with her mother.

Officers were responding to a nonemergency call from James Smith, a neighbor who knew Jefferson’s mother was not well. (Jefferson, a pre-med graduate of Xavier University, had moved home to care for her ailing parent, who was in the hospital recovering from unspecified injuries.) Smith was worried when he saw doors to the Jefferson home wide open late at night. 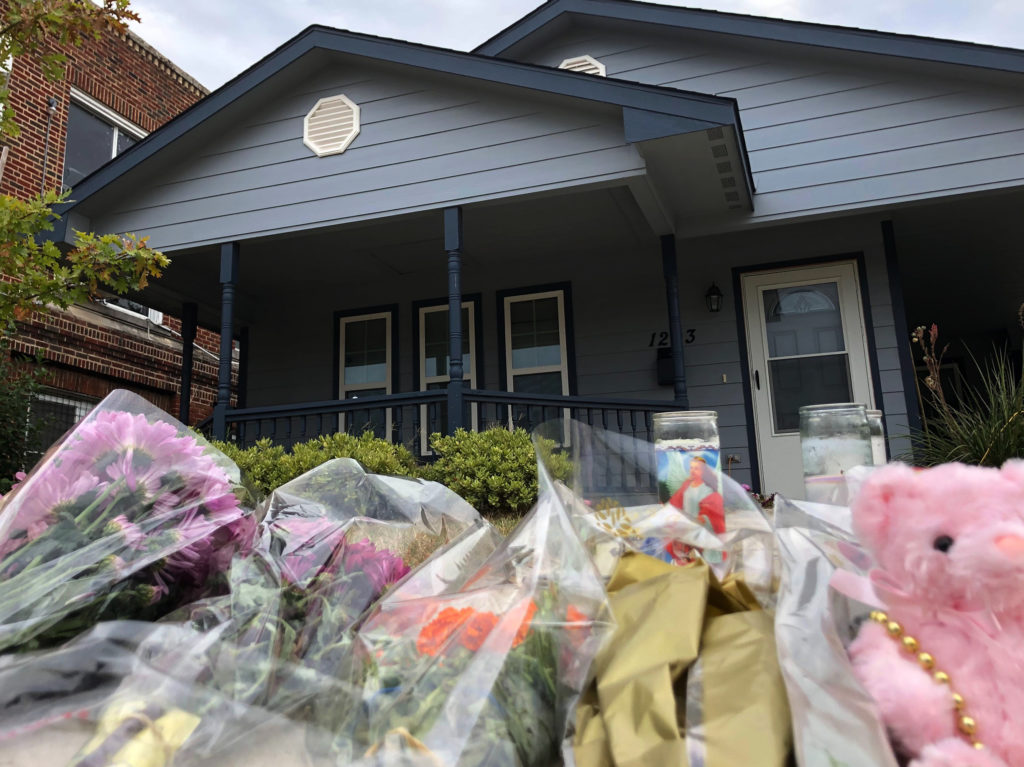 Bouquets of flowers and stuffed animals are piling up outside the Fort Worth, Texas, home of 28-year-old Atatiana Jefferson, who was shot to death early Saturday morning by a police officer. CREDIT: Jake Bleiberg/AP

Despite the nonemergency nature of the call, two police officers crept up to the house unannounced, their flashlights sweeping the yard. Then one spotted Jefferson peering out of a window.

In body camera footage released by the Fort Worth Police Department, an officer can be heard shouting, “Put your hands up! Show me your hands!” That was probably the last thing Jefferson heard.

Within two seconds of that warning, Officer Aaron Dean shot through Jefferson’s bedroom window. She died in her home; her nephew was in the same room, watching in shock.

On Monday, Dean, who is white, resigned from the police department. Several hours later he was arrested and charged with murder.

Jefferson’s death within the supposedly safe confines of her home at the hands of a uniformed police officer sparked instant fear and outrage in many of Texas’ black communities.

Only two weeks ago, an off-duty Dallas police officer, Amber Guyger, had been found guilty of murdering her neighbor, 26-year-old Botham Jean, in his apartment. Guyger later told authorities she’d mistaken Jean’s apartment for her own, one floor below his.

The long lead-up to her trial polarized not just the city, but also the country, and kept the issue of police violence in communities of color just under the boiling point.

The fact that the officers in both of these cases are white and both victims are African American has not gone unnoticed. But where the city of Dallas was, for many, too slow to investigate Guyger’s case and bring it to trial, things are unfolding differently in Fort Worth.

Dean, the officer who killed Jefferson, was placed on detached duty Sunday and stripped of his badge and gun, according to Fort Worth Police Chief Ed Kraus.

Kraus said he intended to fire Dean on Monday, but then Dean handed in his resignation. “Had the officer not resigned,” the chief said, “I would have fired him for violations of several policies including our use-of-force policy, our de-escalation policy and unprofessional conduct.”

Kraus promised a “thorough, transparent and speedy” investigation into Jefferson’s death, and said he hopes to rebuild trust in a community that is deeply suspicious of its police force.

At the family’s news conference hours earlier, Jefferson’s brother, Adarius Carr, said he’s been a Navy man for a dozen years. He said in the Navy there are consequences for not following procedure — and there should be here as well.

“I want to go on and dispel the myth that this is somehow a one-off,” said attorney S. Lee Merritt, a civil rights lawyer who represents Jefferson’s family. Merritt was also one of the attorneys who represented Botham Jean’s family.

The fact that Jefferson was killed by a police officer in her home is not, Merritt said, “just a bad luck incident from an otherwise sound department. They’re in need of serious systematic reform.”

Pushing for an independent inquiry

Kraus has asked the Texas state police to investigate; the agency has yet to agree, and may not, as the Rangers usually start work at the very beginning of a case. The chief said authorities also have presented the case to the FBI because of possible civil rights violations.

Meanwhile, the city’s top representatives, from the mayor to the city manager to Kraus, have apologized profusely and empathized with the Jefferson family’s torment.

“We are all heartbroken today,” the city’s mayor, Betsy Price, told the media on Monday. “The entire city is in pain. As a mother, a grandmother, a sister, I can’t imagine anything worse. And I’m so sorry on behalf of the entire city of Fort Worth.”

As sincere as the apologies are, the mayor also said, “Sorry doesn’t cut it,” and that “The entire city needs to surround [Jefferson’s nephew] with prayer, support and anything that his family needs.”

Price hoped that trust between Fort Worth’s citizens and its police would eventually be rebuilt but warned that it will take time and lots of incremental steps.

That cause wasn’t helped by the photo the Fort Worth Police Department released on Saturday showing a legal firearm that was found inside Jefferson’s bedroom.

“In hindsight … it was a bad thing to do,” Kraus said, adding that there is nothing unusual in Texas about a homeowner keeping a gun for protection.

At Monday’s news conference, the mayor insisted the gun was irrelevant.

“We will not stand down on this one”

Not everyone was ready to heal, though.

Community activist Malikk Ed is a member of the Brotherhood Movement. He remembers the riveting video two weeks ago when, at Amber Guyger’s sentencing, Botham Jean’s younger brother, Brandt Jean, told Guyger he forgave her and they exchanged a long, tearful hug. Then presiding judge Tammy Kemp left the courtroom and returned with her Bible. She gave it to Guyger and also hugged her.

While there were many wet eyes in the courtroom (and behind some news desks, to judge from the coverage), Ed is having none of it.

Dean has been charged with murder, but that doesn’t mean he will be convicted. In fact, most police officers who are tried for killing citizens aren’t convicted.

And no matter what happens to Dean, there may be mistrust that cannot be fixed.

James Smith, who called the police to Jefferson’s home out of concern for his neighbor, told the Fort Worth Star-Telegram that Jefferson’s death will make some people think twice about calling the police when they need them.