A federal lawsuit challenging Idaho’s ballot initiative process as unconstitutional because it requires signatures from multiple legislative districts has been dismissed.

Chief U.S. District Court Judge David C. Nye didn’t rule Tuesday on the merits of the case but said plaintiff Ryan Isbelle lacked standing to bring the lawsuit because he hadn’t tried to get an initiative on the ballot.

Nye in his ruling said Isbelle could file an amended complaint within 30 days if he wanted to keep the case alive.

“I’ll be looking into my options,” Isbelle said Wednesday. “If it means starting my own initiative, I’m willing to do that.”

Isbelle, a beer delivery man in the Lewiston area who describes himself as a political junkie, said he’s been frustrated that groups with ballot initiatives in progress haven’t signed on to his lawsuit.

The Idaho attorney general’s office, which argued for the lawsuit’s dismissal, had no comment on the ruling, spokesman Scott Graf said.

Isbelle said the change unconstitutionally gave more weight to signatures in some districts, while the 6% statewide requirement kept all voters on an equal footing.

The ballot initiative process in Idaho has been among the most contentious issues in the state in recent years.

It was the first time in nearly 80 years that Idaho voters used the initiative process to overturn laws passed by elected leaders.

Making the ballot initiative process tougher in 2013, lawmakers said, would prevent initiative backers from getting all or most of the signatures they needed from population centers, noting in particular Ada County in southwestern Idaho.

Idaho is a conservative state with a Republican-dominated Legislature, but urban areas of Idaho tend to be less conservative than rural areas.

Idaho voters again used the initiative process in 2018, this time passing Medicaid expansion with 61% of the vote after years of inaction by state lawmakers.

Lawmakers in the House and Senate responded earlier this year by passing legislation, despite hours of heated testimony opposing it, making the initiative process significantly more difficult by upping the number of signatures and legislative districts required. Opponents complained it gave a handful of rural legislative districts veto power over the ballot initiative process. 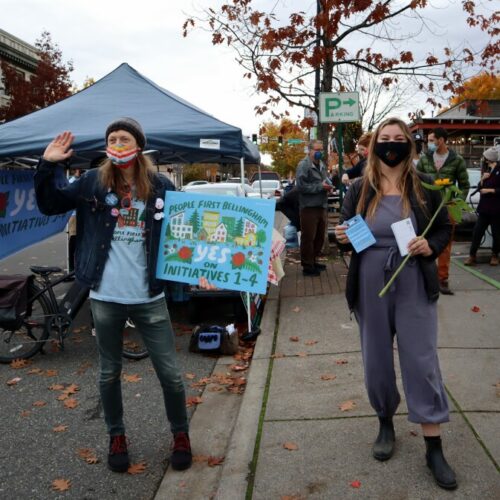 A Grab-Bag Of Juicy Local Measures On Nov. 2 Ballot In Absence Of Statewide Initiatives

There are no statewide initiative measures on the ballot this November in Oregon and Washington state. That’s a change from usual, but voters around the region are casting ballots on a variety of newsworthy local initiatives. Continue Reading A Grab-Bag Of Juicy Local Measures On Nov. 2 Ballot In Absence Of Statewide Initiatives