PULLMAN, Wash. – On top of Bishop Boulevard, Mr. Z’s Casino remains a favorite for undergraduate entertainment in an otherwise quaint college town. About half of Zeppoz business revolves around undergraduate students according to Marketeering Manager Michael Bryant.

“They have cash games Friday and Saturday. Every once in a while, I’ll go in there and play some poker with the guys.”

However, Zeppoz can’t offer students everything they want. With the Supreme Court federally legalizing sports betting in 2018, interest has grown among students despite Washington State still have laws opposing the practice.

And while sports betting remains illegal in the state, underground book makers control the market.

“There is definitely an opportunity to bet on sports games. As long as you know the right person,it’s pretty easy to be able to place a bet on different lines in different games,” student Gabe Brookshier said.

Books are typically electronic and all privately organized. Lines for games are posted daily. Those looking to bet simply respond with how much they’re willing to bet on any given game.

“I was betting on games, and thought it would be so much for fun if people were betting through me. So every game would become fun for me,” an anonymous bookie said. “I expected to break even for most weeks, I wasn’t really in it for the money in the beginning.

Every week I’ve averaged around one–thousand dollars in profit so far.”

The book maker says he offers better lines than Vegas, occasional free parlays to regular customers, prop bets, NCAA lines, and a community feeling with bets being openly visible to others in the book. For what he calls customer service, the bookie’s confident Washington legalizing the practice with casinos won’t change his operation much.

Many of the bookmaker’s clients could legally gamble in the Oregon Lottery’s new sports betting app; however, they say payout is a hassle and the interface is terrible. Something as small as a Fantasy Football and March Madness money pools violates state law, according to the Washington State Gambling Commission, but its only enforced in the event of a complaint.

Additionally, local bookmaking is punishable by a felony in Washington, but bookies aren’t exactly scared off.“I would love to [keep doing it]. It depends how life goes and how they treat local bookies,” the bookie said. The bookmaker suggested he would like to operate legally.

For now, he – along with Zeppoz – waits patiently for legislation.

PULLMAN – WSU announced that starting on October 9th for their game against Oregon State, anyone 12 and older is required to be fully vaccinated… Continue Reading New COVID Procedures at Gesa Field

On a college campus it’s probably common that face masks are required inside campus buildings. However, the real issue with that is where those face… Continue Reading Masks and the Environment

Pullman Shooting Leaves Student in Fear of the Unknown 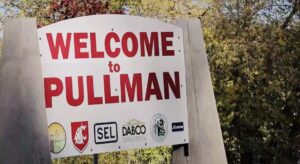 A struggling district: Pullman schools are facing an all-time high in staffing shortages