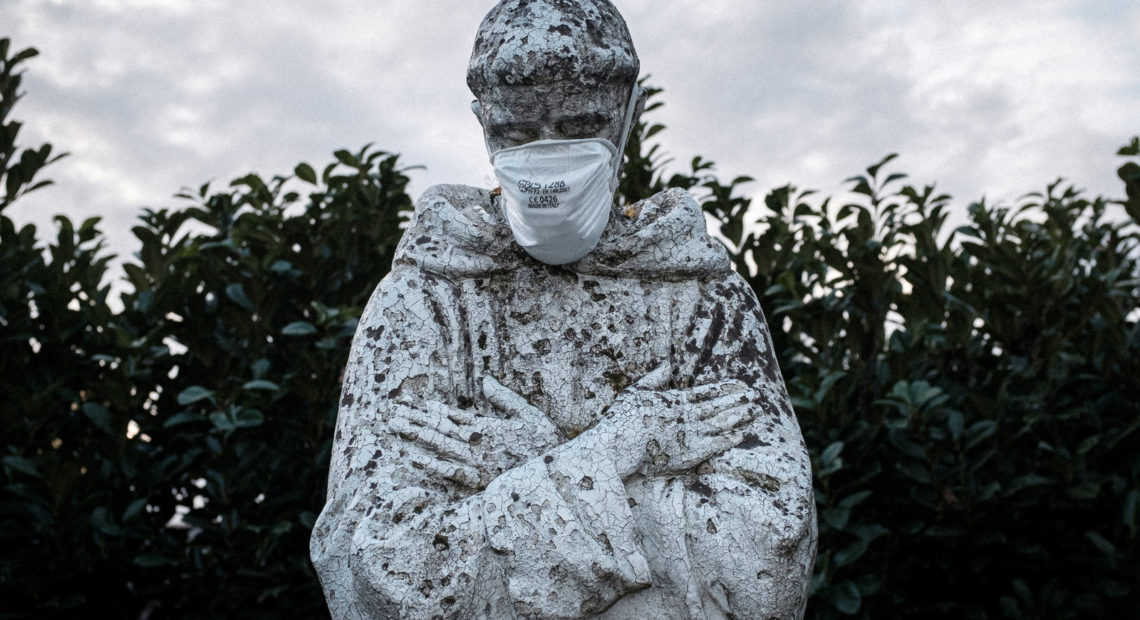 A person in Washington state infected with coronavirus has died, according to the Seattle and King County Department of Health. The fatality marks the first death associated with the virus in the United States. The health department had no further details at the time of the announcement, but plans to announce more Saturday afternoon during a 1 p.m. PT news conference.

The death comes after U.S. health officials have warned that coronavirus now appears to be spreading within the country from person to person independent of any foreign travel. The Centers for Disease Control and Prevention acknowledged three such cases, known as community spread, in the U.S. late Friday night.

The Centers for Disease Control and Prevention announced late Friday that it is “aware of four new presumptive cases of COVID-19.”

The new cases were reported in:

According to KUOW Seattle:

The two “presumptive positives” announced by state and county health officials Friday night included a Snohomish County high school student with no recent overseas travel and a King County woman in her 50s who had recently returned to the United States from South Korea.

The case of the Jackson High School student in Mill Creek was of particular concern as one of just four cases contracted within the United States. Health officials are notifying health care workers and patients who might have come into contact with the patient.

Officials are responding as if the cases were confirmed; the results are still pending from CDC tests.

“We are going to find more individuals so we really believe that the risk at this point is increasing,” said Washington State Health Officer Kathy Lofy on Friday, according to KNKX.

Everett Public Schools has closed Jackson High School on Monday so it can be sanitized. The high school student also visited Seattle Children’s North Clinic on Monday and health care workers who may have been exposed are being tested.

The King County patient never needed hospitalization and is recovering without complications. After returning from travel, she spent one day at work until noticing her symptoms. Those she came in contact with at her workplace are being notified.

Meanwhile, the World Health Organization said the risk that COVID-19 will spread and have a global impact is now “very high,” raising its assessment for the coronavirus disease that’s now been found in more than 50 countries.

As of Monday, cases of COVID-19 had been found in just 29 countries. But thousands more diagnoses were confirmed this week, including two spikes that were tied to Italy and Iran.

“Outside China, there are now 4,351 cases in 49 countries, and 67 deaths,” WHO Director-General Tedros Adhanom Ghebreyesus said in a briefing Friday morning. “Since yesterday, Denmark, Estonia, Lithuania, Netherlands and Nigeria have all reported their first cases.” 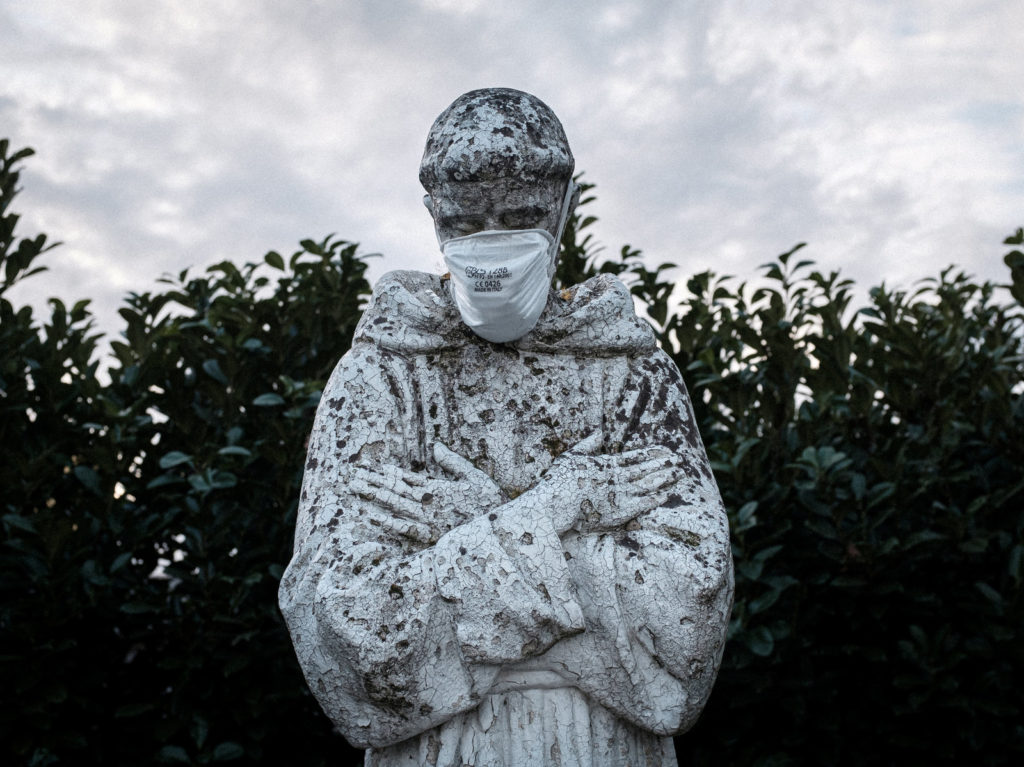 A face mask adorns a statue of St. Francis of Assisi in the town of San Fiorano, one of the places in Italy on lockdown due to the novel coronavirus outbreak. The picture was taken by schoolteacher Marzio Toniolo.
CREDIT: Marzio Toniolo/via Reuters

Tedros said, “We have now increased our assessment of the risk of spread and the risk of impact of COVID-19 to very high at a global level.”

Dr. Michael Ryan, executive director of the WHO Health Emergencies Program, said he’s encouraged by signs that the coronavirus can be contained – and he cites that as one reason the outbreak shouldn’t be called a pandemic.

The new risk assessment, Ryan said, “is not in order to alarm or scare people. That is to get countries to understand” that when they get their first case of the coronavirus, they have the ability to control its spread.

With the outbreak now roughly two months old, no country should be caught off-guard by the virus, Ryan said.

Many of the latest cases have links to Italy, which is now believed to have exported two dozen COVID-19 cases to 14 other countries, Tedros said.

The tally of cases there has grown at an alarming rate this week. Italy had 229 cases as of midday Monday. In an update late Friday, the country’s Ministry of Health said 888 people have been infected with the respiratory virus, including 531 in the Lombardy region.

New cases have also been confirmed in countries in the Middle East and Northern Africa, several of them linked to people who had traveled to Iran. Tedros says 97 COVID-19 cases have been exported from Iran to 11 other countries.

South Korea has also seen a dramatic rise, with 2,337 cases now confirmed — an increase of more than 570 cases in just 24 hours. On Monday, South Korea’s Centers for Disease Control and Prevention had reported 977 cases. The country says 13 people have died.

Even as he raised a new alarm over COVID-19, Tedros also said he’s still hopeful that the novel coronavirus that emerged in Wuhan, China, months ago can be contained. Epidemiologists and health agencies, he noted, have been able to trace most cases to known clusters or contacts who were infected.

“We do not see evidence as yet that the virus is spreading freely in communities,” the WHO director-general said. “As long as that’s the case, we still have a chance of containing this virus, if robust action is taken to detect cases early, isolate and care for patients and trace contacts.”

Tedros also said early Friday that China had reported just 329 cases in the past 24 hours — the lowest rate in more than a month for the country whose Hubei province, where Wuhan is located, had been the center of the outbreak.

The challenge for epidemiologists and health professionals is to “break the chains of transmission” so they can contain it, Tedros said.

Researchers are also working to create an effective treatment for COVID-19. Tedros said more than 20 vaccines are being developed worldwide, with some already in clinical trials. The first results could come in the next few weeks, he said.

Tedros also emphasized that people can protect themselves from the new coronavirus and other illnesses by washing their hands regularly with soap and water, or using an alcohol-based hand rub. And he urged anyone who’s either experiencing symptoms of illness or at heightened risk for respiratory problems to limit their contact with others.

“Our greatest enemy right now is not the virus itself. It’s fear, rumors and stigma,” Tedros said. “And our greatest assets are facts, reason and solidarity.”

COVID-19 has caused more than 2,800 deaths, and there are more than 83,000 cases of the new coronavirus worldwide — the majority of them in China. Some 37,000 people have recovered from the disease.

Citing the work of a joint WHO-Chinese research team in China, the WHO said earlier this week that the fatality rate for COVID-19 is “between 2% and 4% in Wuhan, and 0.7% outside Wuhan.”