K-9 “Chief” goes home after being shot in eye

PULLMAN (Murrow News 8) – Just five days after a robbery suspect shot him through the eye, “Chief” is going home.

The Moses Lake Police Department K-9 Unit dog left the WSU Veterinary Teaching Hospital Wednesday morning, in a processional with law enforcement from around the region.

The 3-year-old German Shepherd was chasing a suspect in Moses Lake late Friday night following a car chase. Police say the suspect shot Chief before officers returned fire. The suspect died as a result of the gunfight.

Medics flew Chief to the Moscow-Pullman Regional Airport Saturday, after which he went to the WSU Veterinary Teaching Hospital.

According to the hospital, Chief arrived at the hospital with a low heart rate, blood running from his nose and was struggling to breathe due to swelling in the mouth from the gunshot.

“We weren’t sure if he was going to make it,” said Emilia Terradas, a resident in veterinary Emergency and Critical Care. “I was very worried about him.”

Following a CT scan, and to the surprise of veterinarians, the bullet went through the dog’s left eye and shattered his jawbone, missing the brain entirely.

“That gunshot wound, if it was angled a little differently, it would have killed him,” Dr. Terradas said.

Doctors removed the dog’s eye, but now say much of his recovery surrounds letting his jawbone heal.
Wednesday morning, law enforcement led a procession beginning at about 10:30 from the hospital, though downtown Pullman, on its way to Moses Lake.
It’s unclear if Chief will return to active duty. 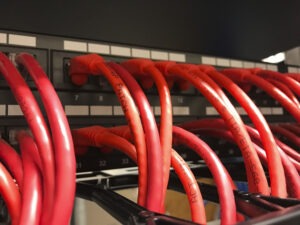