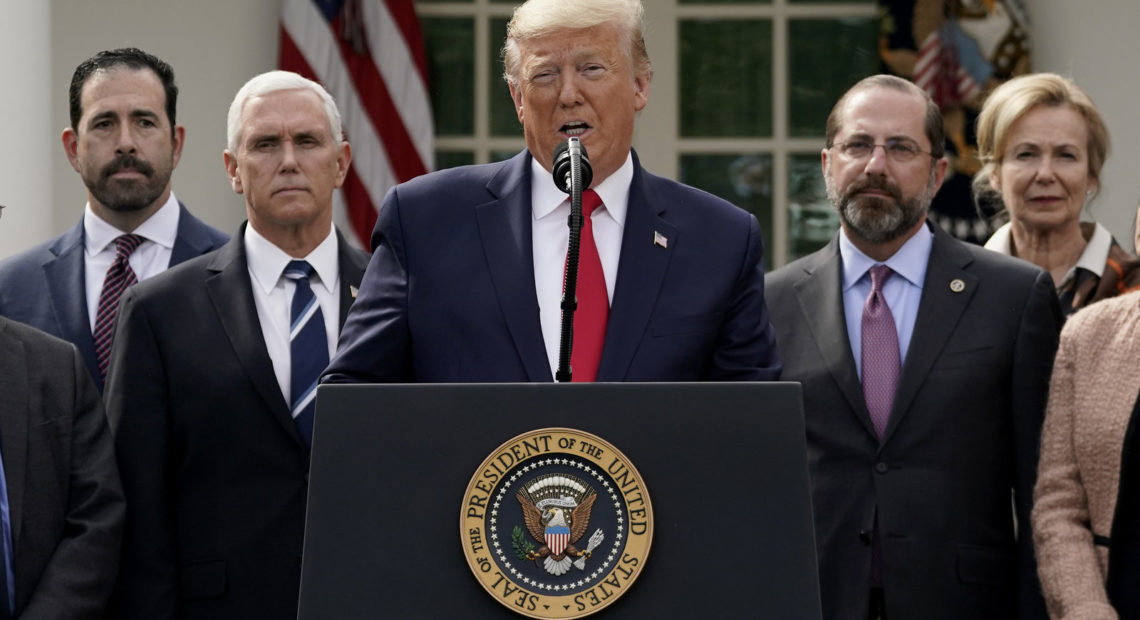 In a largely unprecedented move for a public health crisis, President Trump is declaring a national emergency to free up as much as $50 billion in federal assistance to state and local governments overwhelmed by coronavirus, and to lower regulatory barriers to surge medical resources to areas that need them most.

Speaking at the White House Rose Garden for more an an hour Friday afternoon, Trump also said the federal government would work with the private sector to expand testing. But, he added, people should only take the test if they have “certain symptoms.” Trump said up to half a million tests would be available early next week, and said a list of locations would probably be announced on Sunday night. He said 5 million tests would be available by next month. 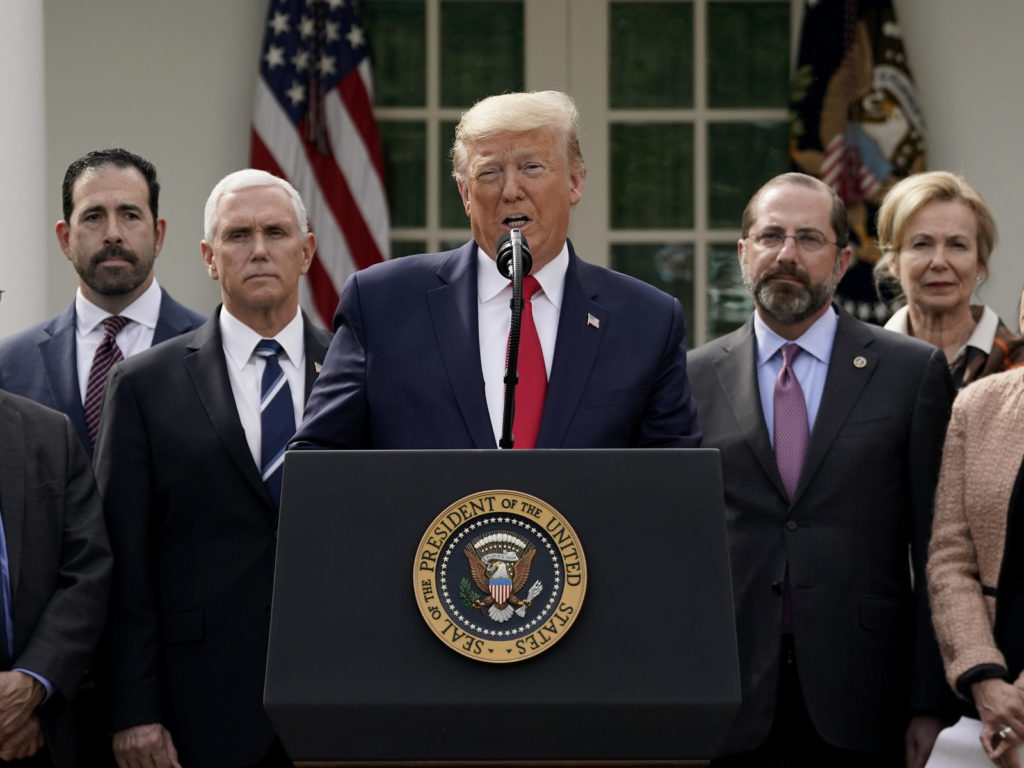 President Trump holds a news conference about the ongoing global coronavirus pandemic in the Rose Garden at the White House on Friday. CREDIT: Drew Angerer/Getty Images

“This will pass,” Trump declared, “this will pass through and we’re going to be even stronger for it.”

The president also said he will “most likely” get tested himself. Trump posed for a picture with a member of Brazilian President Jair Bolsonaro’s government at Mar-a-Lago last weekend who has tested positive for the coronavirus.

A White House official tells NPR Trump is using authority under the Stafford Act to make a nationwide emergency determination. And he is encouraging all governors and tribal leaders to request a “major disaster” declaration as well, which would free up even more assistance.

Stafford Act emergencies are typically used for getting out ahead of disasters like hurricanes, with a “major disaster declaration” to follow if there is a lot of damage. A Stafford Act emergency has only been used once before in the context of a crisis of disease. That was in fall of 2000, when the states of New York and New Jersey requested emergency declarations to help deal with the West Nile Virus.

The Stafford Act declaration activates the Federal Emergency Management Agency, which can help with technical, financial and logistical relief. FEMA could, for instance, facilitate the distribution of coronavirus tests, medications, food or even bring in tents for hospitals treating an overload of patients if it gets to that point.

Trump has also declared a national emergency under the National Emergencies Act. This, in conjunction with the public health emergency already declared by HHS Secretary Alex Azar in January, would activate regulatory relief that can aid the response. For instance, this allows agencies to waive licensing requirements so medical professionals could cross state lines to assist in areas of greatest need.

A proclamation citing the National Emergencies Act states: “The spread of COVID-19 within our Nation’s communities threatens to strain our Nation’s healthcare systems … It is incumbent on hospitals and medical facilities throughout the country to assess their preparedness posture and be prepared to surge capacity and capability. Additional measures, however, are needed to successfully contain and combat the virus in the United States.”

Earlier this week Senate Democrats, led by Senate Minority Leader Chuck Schumer, asked President Trump to work with governors to declare Stafford Act emergencies, saying it would free up $42 billion currently in the FEMA Disaster Relief Fund. Trump said it would give HHS broad authority to enable doctors and hospitals “maximum flexibility” to respond to the virus and care for patients. Hospital, nursing and physician organizations also asked the President to declare an emergency.

Doug McMillon, the CEO of Walmart, said his company would make space in its parking lots for the drive through clinics. The CEOs of Target, Walgreens and CVS also said their companies would be helping in the response. And, he said, the government would take advantage of the low oil prices and buy oil for the strategic petroleum reserve. “We’re going to fill it right to the top,” Trump said.

Trump also raised the possibility the United Kingdom would be added to the ban on travel to the U.S. by foreign nationals from the European Union. The U.K. was exempted from the action Trump announced Wednesday night, but has been experiencing an uptick in reported cases.

Trump also cast doubt on legislation that House Speaker Nancy Pelosi has been negotiating with Treasury Secretary Steven Mnuchin to address the crisis. Trump said “We don’t think the Democrats are giving enough.”

In a move aimed at student borrowers, Trump said he would waive interest on federal student loans until further notice using executive action. And he said the government would take advantage of low crude oil prices and buy oil for the strategic petroleum reserve. “We’re going to fill it right to the top,” Trump said.

Trump also denied responsibility for removing the National Security Council’s pandemic office. He scolded a reporter for asking about it — what he called “a nasty question” — and said of the removal, “I didn’t do it. We have a group of people,” adding, “I don’t know anything about it.”

The coronavirus is wreaking havoc across the nation as fears are causing school closures and sports cancellations. Mass crowds are rushing to local stores to stockpile basic goods and finding some empty shelves.

The money during a pandemic can be used for emergency medical care, food and medicine.

The money would be in addition to the $8.3 billion provided by an emergency spending bill Trump signed on March 6.

Trump tweeted about the press conference as White House officials continued to negotiate with lawmakers on a bill that could help mitigate the economic impact of the virus.