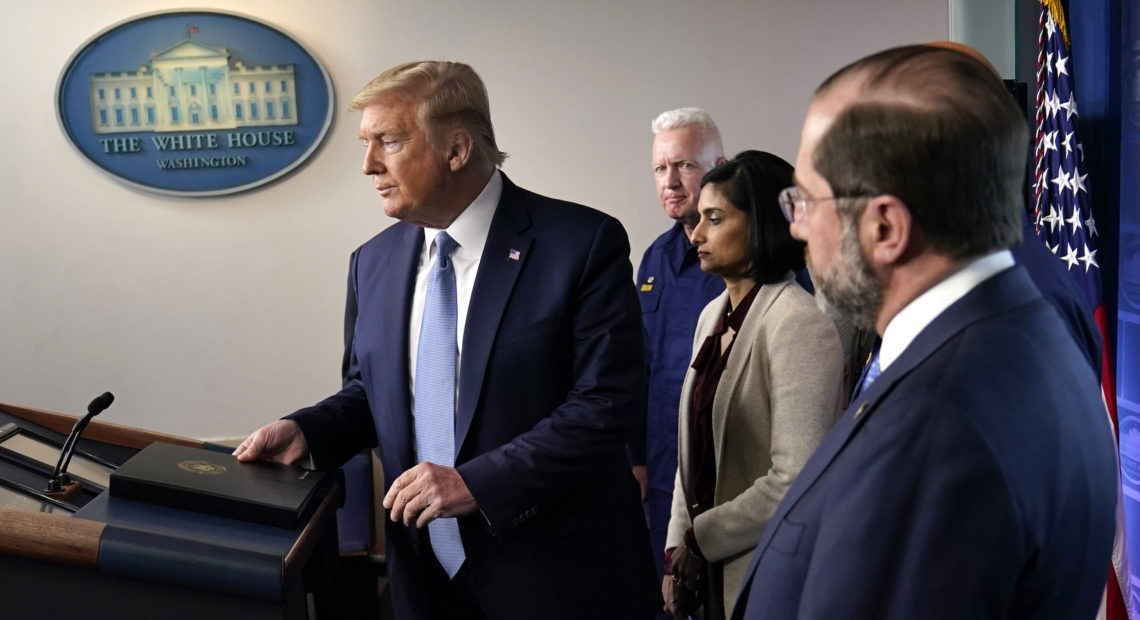 President Trump announced new coronavirus guidelines for at least the next 15 days, including that Americans should avoid groups of more than 10 people.

In a briefing at the White House on Monday, he also urged people to avoid discretionary travel and going out to bars, restaurants and food courts. He recommended that schools close.

The stricter guidelines marked a shift for the president, who has repeatedly stated that the virus is under control. 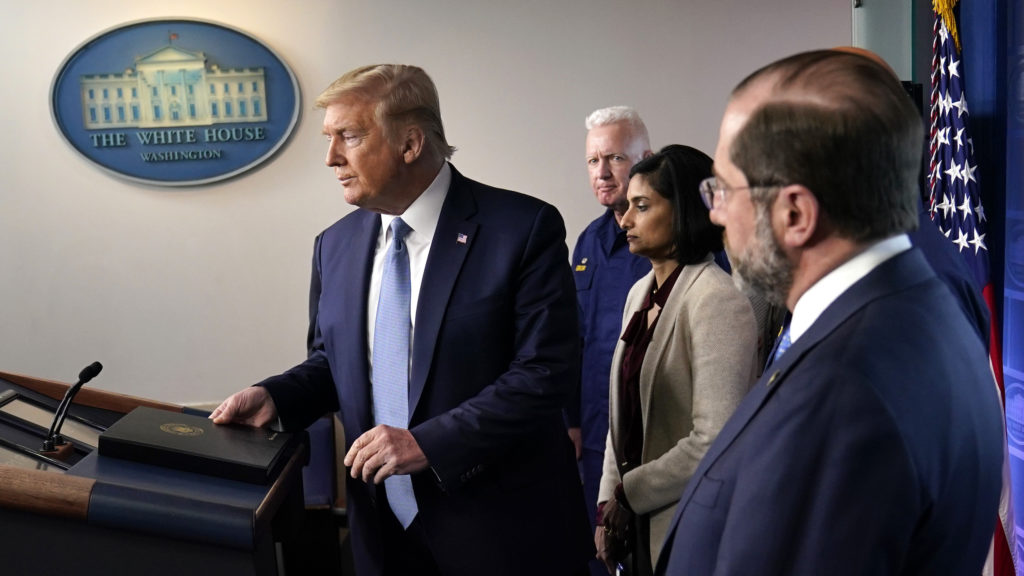 President Trump arrives to speak at a news briefing with the coronavirus task force on Monday in the White House press briefing room. CREDIT: Evan Vucci/AP

He said that with several weeks of action, “we can turn the corner” on the pandemic. But he also cautioned that it could be a while before the virus abates. “It seems to me if we do a really good job … it could be July, August” until the threat of the pandemic diminishes.

When asked if the buck stops with him, Trump said, “Normally, yeah, but this has never been done before.”

Asked how he would rate his administration’s response to the pandemic, he responded, “I’d rate it a 10. I think we’ve done a great job.”

“The market will take care of itself”

The economic impact of the coronavirus is broad, affecting everything from small businesses to major airlines.

Once the virus abates, he said, “I think you’re going to see a tremendous, tremendous surge.”

The Dow Jones Industrial Average closed during the briefing, down nearly 3,000 points, but Trump said, “The market will take care of itself.”

Trump indicated that he was open to changes in the House-passed coronavirus response bill that would make more workers eligible for paid sick leave. The measure — which has not yet been taken up by the Senate — requires companies with fewer than 500 employees to provide paid sick leave but leaves out larger employers.

He also said the government would “back the airlines 100%,” adding, “It’s not their fault.” An airline industry group on Monday requested $25 billion in direct aid and another $25 billion in loans.

Trump also said he disagreed with officials who have told people to go out despite government warnings against such conduct, including the governor of Oklahoma and Rep. Devin Nunes, R-Calif.

While Trump said he hadn’t seen Nunes’ comments, he said such recommendations are “adverse to what the professionals are saying.”

More updates from the briefing:

Dr. Anthony Fauci, director of the National Institute of Allergy and Infectious Diseases, said a possible vaccine for the coronavirus was tested for the first time on Monday. He said the vaccine will be in a trial including 45 people from the Seattle area. But, he cautioned, it would be a year before results are known.

Trump also said it was up to states to decide whether to postpone primary elections set for Tuesday but said he didn’t think it was needed. “They’re doing it very carefully,” he said; he also said that postponing elections is “not a very good thing.”

The state of Ohio is supporting a lawsuit filed by voters who believe they’re vulnerable to the virus and seek to push back the state’s contest, which is slated for Tuesday.

Trump had a call about the pandemic on Monday with the leaders of the Group of Seven nations. In a joint statement released by the White House, they agreed to work together to accelerate and coordinate the global response to the coronavirus pandemic.

Health ministers and finance ministers will have a weekly call to coordinate actions, the leaders said.

Trump also spoke to the nation’s governors. In the briefing, Trump said he told governors that if they could get supplies such as respirators faster on their own, rather than going through the federal government, they should do so.

In a tweet earlier in the day, he singled out New York Gov. Andrew Cuomo, a Democrat, for criticism, saying he needs to “do more.” Asked about the comment at the briefing, Trump said, “We’re getting along very well.”

New York is one of the states hit hardest by the coronavirus. Cuomo has ordered schools closed in the state, and along with the governors of New Jersey and Connecticut, he ordered casinos, gyms and movie theaters to close.

From cities to the Supreme Court

The briefing comes as the government rushes to ramp up testing for the virus, starting with health care workers, first responders and people 65 and older with respiratory symptoms and fevers above 99.6 degrees.

Public health officials have said they expect a surge in cases.

“The worst is yet ahead for us,” Fauci said on Sunday. “It is how we respond to that challenge that’s going to determine what the ultimate endpoint is going to be. We have a very, very critical point now.”

Many schools are closed.

New York City’s mayor on Sunday night said bars and restaurants would be limited to takeout and delivery to try to slow the spread of the virus; Maryland’s governor made a similar announcement on Monday.

Concerns over the outbreak also prompted the U.S. Supreme Court to announce that it was postponing oral arguments scheduled March 23 to 25 and March 30 to April 1. Among the cases the court was scheduled to hear was one involving Trump’s financial records.

According to the court’s statement, the court has delayed arguments for a public health issue before, noting the Spanish flu epidemic in 1918, when it postponed October arguments. Prior to that, the court shortened its argument calendars in August 1793 and August 1798 in response to yellow fever outbreaks.