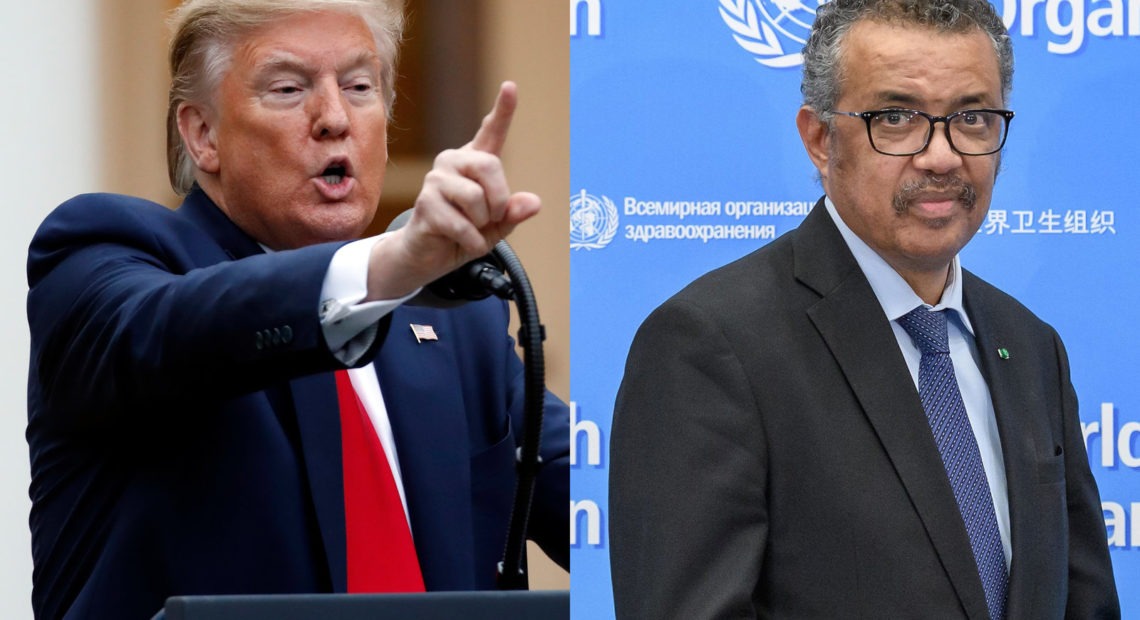 On Tuesday, President Trump said he’s suspending U.S. funding for the World Health Organization. He said the agency has “mismanaged” the pandemic, has been slow to respond to the crisis and is “China-centric.”

We looked at the public record to see what Trump and the WHO had to say over the past 15 weeks about the coronavirus pandemic. Here’s a timeline highlighting key quotes. 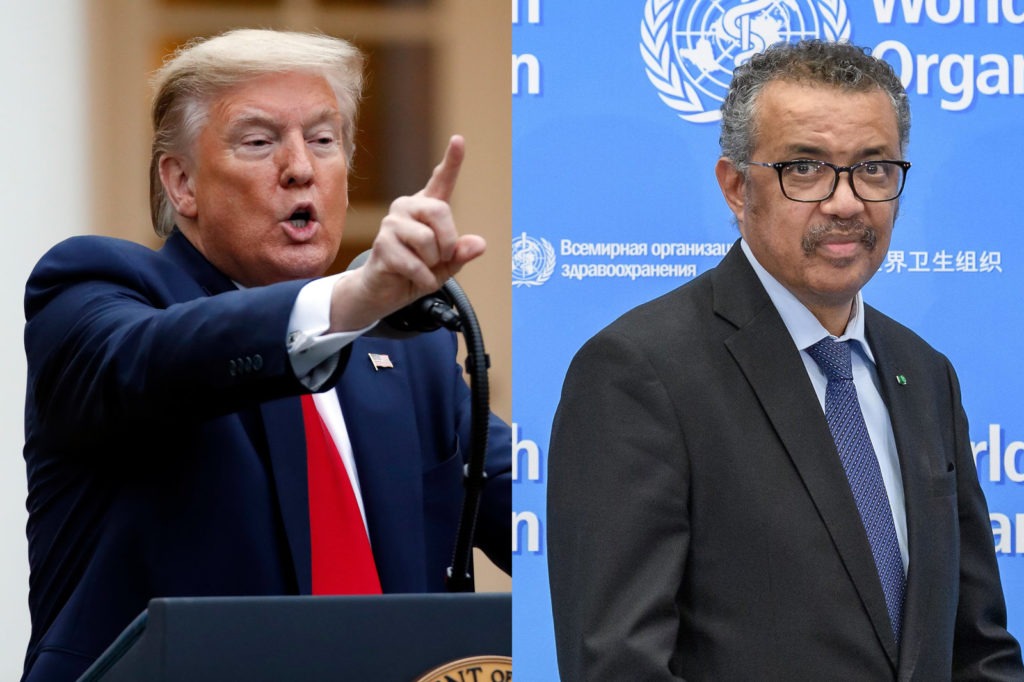 President Trump at the daily coronavirus briefing on Tuesday, when he declared his intent to halt funding to the World Health Organization, and Tedros Adhanom Ghebreyesus, director-general of WHO.
CREDIT: Alex Brandon/AP; Fabrice Coffrini/AFP via Getty Images

The WHO reported a “pneumonia of unknown cause” in Wuhan, China.

The health organization advised against restrictions to China: “WHO advises against the application of any travel or trade restrictions on China based on the current information available on this event.”

The WHO released a statement announcing the source of the disease: “Chinese authorities have made a preliminary determination of a novel (or new) coronavirus, identified in a hospitalized person with pneumonia in Wuhan.”

It added: “In the coming weeks, more comprehensive information is required to understand the current status and epidemiology of the outbreak, and the clinical picture.”

WHO Director-General Tedros Adhanom Ghebreyesus said in a statement that it was too early to declare the coronavirus outbreak a public health emergency of international concern. “Make no mistake. This is an emergency in China, but it has not yet become a global health emergency. It may yet become one.”

In a tweet, Trump praised China for its efforts to prevent the spread of the virus. “China has been working very hard to contain the Coronavirus. The United States greatly appreciates their efforts and transparency. It will all work out well. In particular, on behalf of the American People, I want to thank President Xi!”

At a campaign rally in Iowa, Trump talked about the U.S. partnership with China to control the disease. “We only have five people. Hopefully, everything’s going to be great. They have somewhat of a problem, but hopefully, it’s all going to be great. But we’re working with China, just so you know, and other countries very, very closely. So it doesn’t get out of hand.”

Tedros announced that the outbreak had become a “public health emergency of international concern over the global outbreak of novel coronavirus.”

In an interview with Sean Hannity, Trump said, “We pretty much shut it down coming in from China.” His executive order banning anyone who has been in China in the previous 14 days — excluding U.S. residents and their family members or spouses of U.S. residents or citizens — went into effect.

At a WHO briefing, Tedros urged that there be no travel bans. “We reiterate our call to all countries not to impose restrictions that unnecessarily interfere with international travel and trade. Such restrictions can have the effect of increasing fear and stigma, with little public health benefit. … Where such measures have been implemented, we urge that they are short in duration, proportionate to the public health risks and are reconsidered regularly as the situation evolves.”

At a campaign rally in Manchester, N.H., Trump said: “Looks like by April, you know, in theory, when it gets a little warmer, it miraculously goes away. I hope that’s true. But we’re doing great in our country. China, I spoke with President Xi, and they’re working very, very hard. And I think it’s going to all work out fine.”

At a WHO briefing, Tedros urged world leaders to give priority to containing the virus: “To be honest, a virus is more powerful in creating political, economic and social upheaval than any terrorist attack. A virus can have more powerful consequences than any terrorist action, and that’s true. If the world doesn’t want to wake up and consider this enemy virus as Public Enemy Number 1, I don’t think we will learn our lessons.” 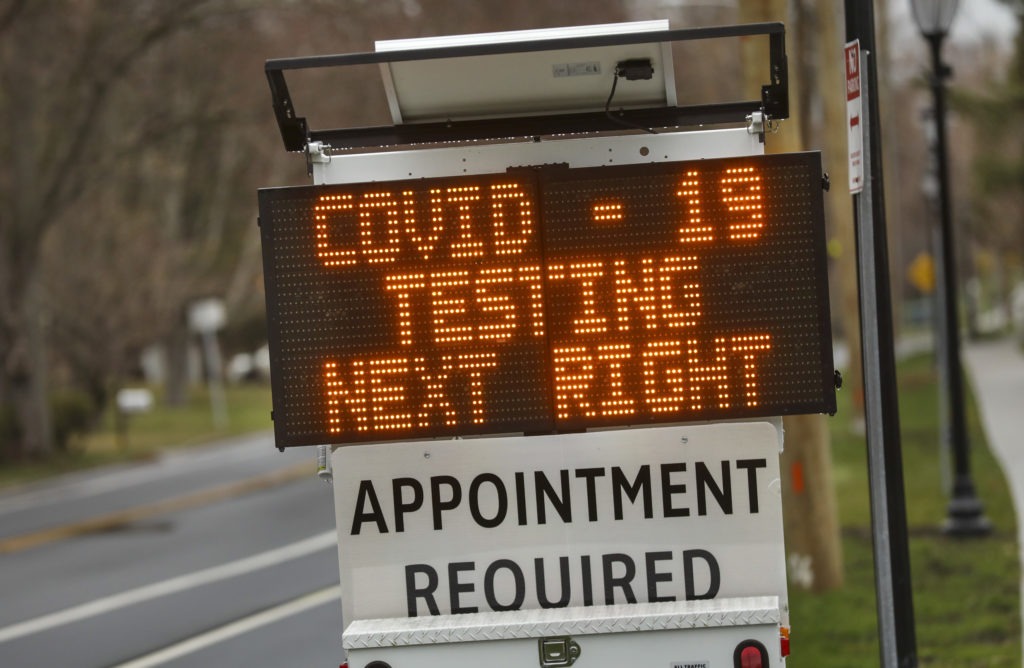 In an interview with Geraldo Rivera, Trump characterized the threat of the virus in the U.S. by saying: “In our country, we only have, basically, 12 cases, and most of those people are recovering and some cases fully recovered. So it’s actually less.”

In a tweet, Trump wrote, “The Coronavirus is very much under control in the USA. We are in contact with everyone and all relevant countries. CDC & World Health have been working hard and very smart. Stock Market starting to look very good to me!”

In a news conference, Trump said: “When you have 15 people, and the 15 within a couple of days is going to be down to close to zero, that’s a pretty good job we’ve done.”

The WHO raises the global risk of the coronavirus from “high” to “very high.”

In a WHO briefing, Tedros praised China and the U.S. for taking “the right approach.” He said: “After our visit to Beijing and seeing China’s approach, and President Xi leading that, and also in the U.S., President Trump himself, and also for regular coordination, designating the vice president. These are the approaches we’re saying are the right ones, and these are the approaches we’re saying are going to mobilize the whole government.”

In a Fox News town hall, Trump said, “It’s going to all work out. Everybody has to be calm. It’s all going to work out.”

In a meeting with Republican senators at the U.S. Capitol, Trump said, “This was unexpected. … And it hit the world. And we’re prepared, and we’re doing a great job with it. And it will go away. Just stay calm. It will go away.”

Trump said in an Oval Office address: “The vast majority of Americans, the risk is very, very low.”

Tedros said the WHO had “made the assessment that COVID-19 can be characterized as a pandemic.” 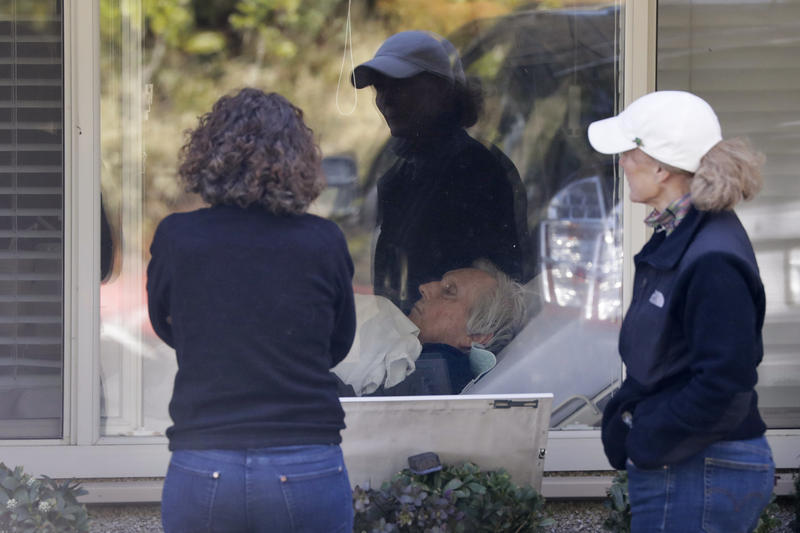 Sisters Seri Sedlacek, left, and Susan Simpkins look in on their father, Chuck Sedlacek, at the Life Care Center, Wednesday, March 18, 2020, in Kirkland. Shuksan Healthcare Center in Bellingham is working to avoid what happened at the Kirkland facility. CREDIT: Elaine Thompson/AP

“You cannot fight a fire blindfolded. And we cannot stop this pandemic if we don’t know who is infected,” Tedros said at a briefing in Geneva. He added, “We have a simple message for all countries: test, test, test. Test every suspected case.”

At a press briefing, Trump issued orders to control the spread of the virus in the U.S.: “My administration is recommending that all Americans, including the young and healthy, work to engage in schooling from home when possible. Avoid gathering in groups of more than 10 people. Avoid discretionary travel. And avoid eating and drinking at bars, restaurants and public food courts. If everyone makes this change or these critical changes and sacrifices now, we will rally together as one nation and we will defeat the virus. And we’re going to have a big celebration all together. With several weeks of focused action, we can turn the corner and turn it quickly.”

Trump tweeted about potential coronavirus treatments: “HYDROXYCHLOROQUINE & AZITHROMYCIN, taken together, have a real chance to be one of the biggest game changers in the history of medicine. The FDA has moved mountains – Thank You! Hopefully they will BOTH (H works better with A, International Journal of Antimicrobial Agents)…..”

In a WHO briefing, Tedros said, “Using untested medicines without the right evidence could raise false hope and even do more harm than good.”

Trump said: “Easter is a very special day for me. And I see it sort of in that timeline that I’m thinking about. And I say, wouldn’t it be great to have all of the churches full?”

“We are at war with a virus that threatens to tear us apart,” said Tedros to world leaders in a special virtual summit on the COVID-19 pandemic.

Dr. Mike Ryan, head of the WHO’s Health Emergencies Programme, said you can’t lift a lockdown all at once. “You need to say, ‘We will stop doing this element of the shutdown, and then we will wait, and we will look at the data. If that works, we go to the next stage and the next stage.’ So a careful, calibrated stepwise exit from lockdown.” 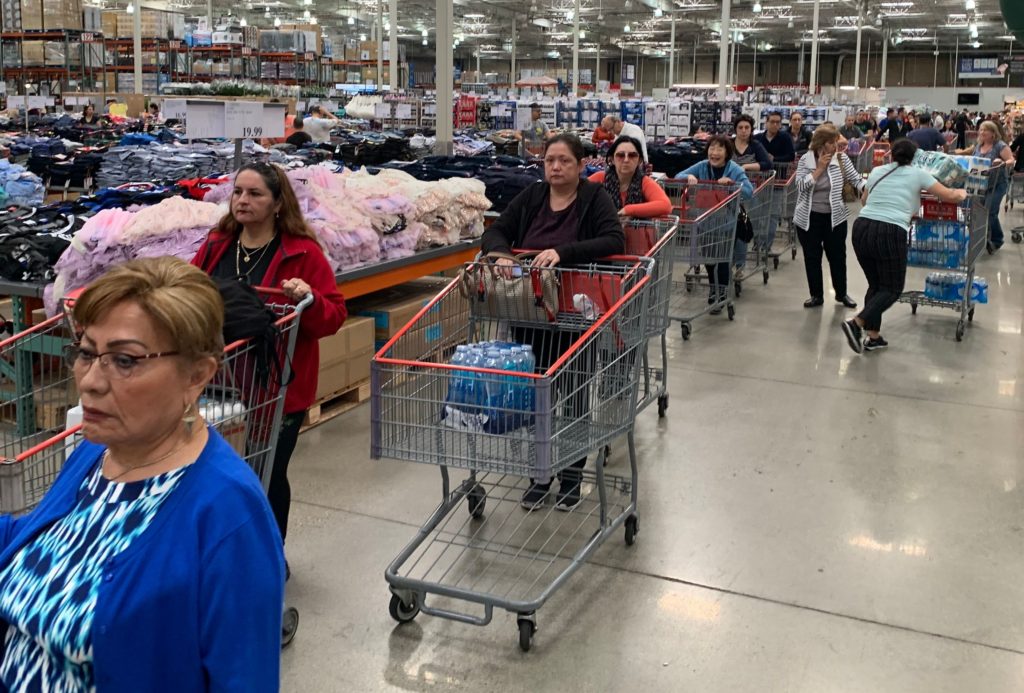 Customers line up to buy water and other supplies in Burbank, Calif., on March 6 in reaction to fears that the novel coronavirus would spread and force people to stay indoors.
CREDIT: Robyn Beck/AFP via Getty Images

Trump criticized the WHO for mishandling the pandemic. “The WHO really blew it. For some reason, funded largely by the United States, yet very China-centric. We will be giving that a good look. Fortunately, I rejected their advice on keeping our borders open to China early on. Why did they give us such a faulty recommendation?”

“Please don’t politicize this virus,” Tedros said in a briefing in Geneva after he was asked about Trump’s remarks the day before. He later urged political leaders to “please quarantine politicizing COVID.”

“We regret the decision of the president of the United States to order a halt in funding to the World Health Organization,” said Tedros at a news conference.

Responding to the U.S. accusations, Ryan of the WHO said, “In the first weeks of January, the WHO was very, very clear.”

In an interview with NPR that will air on April 16, the U.S. ambassador to the United Nations, Kelly Craft, stated: “[The World Health Organization] was not accurate. Had it been accurate, it would have slowed the virus and saved thousands of lives.”