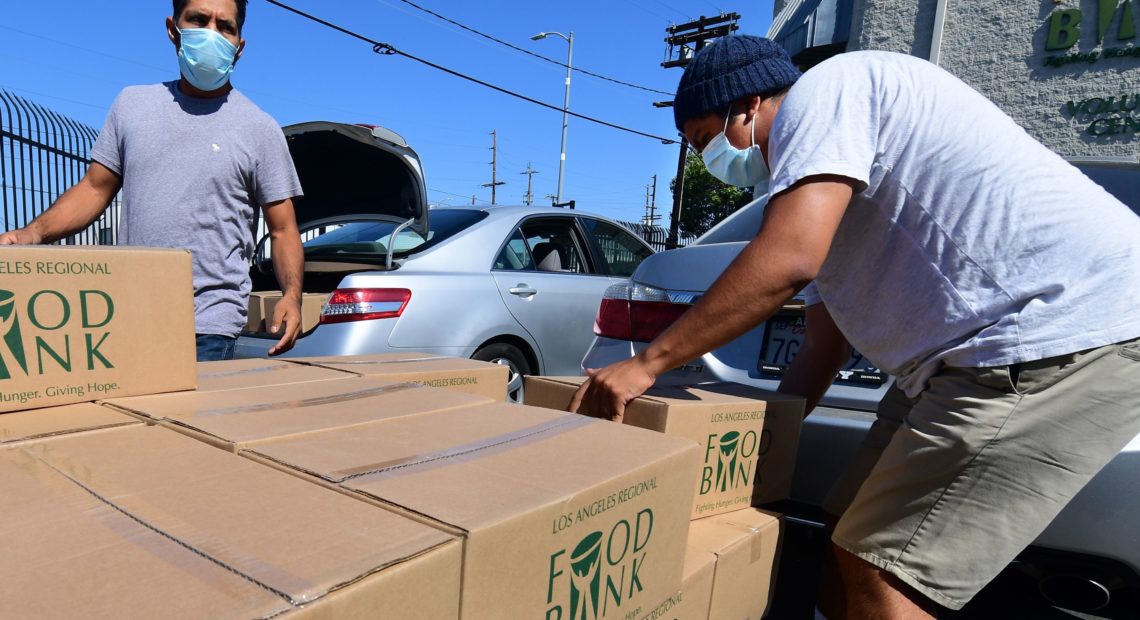 Food Banks Get The Love, But SNAP Does More To Fight Hunger

Millions of newly impoverished people are turning to the charitable organizations known as food banks. Mile-long lines of cars, waiting for bags of free food, have become one of the most striking images of the current economic crisis. Donations are up, too, including from a new billion-dollar government effort called the Farmers to Families Food Box Program. 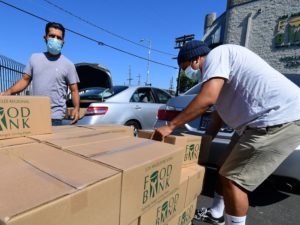 People load their vehicles with boxes of food at a Los Angeles Regional Food Bank earlier this month in Los Angeles. Food banks across the United States are seeing numbers and people they have never seen before amid unprecedented unemployment from the COVID-19 outbreak. CREDIT: Frederic J. Brown/AFP via Getty Images

Yet many people who run food banks are ambivalent about all the attention, because they know the limitations of their own operations. They point to a stream of food aid that’s far more important than food banks: the Supplemental Nutrition Assistance Program, or SNAP.

Food banks actually have two separate functions. They provide food to people who need it, but they also find new homes for food that might go to waste — often because farmers and food companies haven’t been able to sell it. This second job can be unwieldy and labor-intensive.

Take, for example, the U.S. Department of Agriculture’s new food bank donation program. It was set up, in large part, to relieve distress among farmers and food companies who can’t find places to sell their products — like Borden Dairy, a Dallas-based milk processor which saw demand plunge when restaurants and schools closed in mid-March. The company couldn’t find buyers for all the milk its farmers were producing, and asked some of them to simply dump the surplus.

As part of the new USDA program, though, Borden Dairy won a $137 million contract to send 44 million gallons of milk to charitable organizations, mainly food banks.

Tony Sarsam, Borden Dairy’s CEO, says it “gives a sense of purpose and meaning to this organization. And it’s also important because we work with so many independent farmers. It gives them stability.”

More than a hundred companies got similar contracts from USDA, worth a total of $1.2 billion. They include wholesale distributors of fresh produce and meat. More contracts are coming, with the department expecting to spend about $3 billion on this new program. It has become an emergency buyer of surplus food, and the purchase price includes money to transport the food to food banks.

Sarsam and other companies who’ve won USDA contracts now have to figure out how to give away these products. It means setting up a new and mostly unfamiliar supply chain. “We have to get off to the races, and find connections in the charitable community that can take our products. We’ve been on the phones non-stop,” he says.

It’s more complicated than one might imagine. “Cold storage is a big deal; not everybody has enough cold storage for it,” Sarsam says.

So far, he’s only found takers for about 10% of the milk that the company needs to give away to earn that full paycheck from the USDA.

Robin Safley is on the receiving end of these donations. She’s executive director of Feeding Florida, an association of twelve food banks. Those organizations deliver food to a couple of thousand small non-profit groups that hand it out to people at temporary distribution points known as food pantries.

“First of all, we’re grateful, right?” Safley says. “Grateful in a lot of ways.”

But the logistics of getting food to the right place at the right time is a challenge even in normal times. Throw in social distancing, volunteers worried about their safety, and a wave to potential donations from USDA-funded companies, and it gets downright daunting.

“That means we have new people to deal with. How many trucks are they sending, and where are they sending them?” Safley says. “We don’t want them to stack up on some of the other trucks that we have moving.” She compares it to solving a Rubik’s cube.

The USDA has a separate program that buys commodities and donates them to food banks, but it’s smaller than the new effort, amounting to roughly half a billion dollars worth of food donations each year.

There is, however, a whole different way to help people get the food: Simply distribute money that people can use to buy groceries.

Money instead of food

This is what makes SNAP, formerly known as food stamps, so effective. Last year, 35 million people received $55 billion in SNAP benefits, down from a peak of 47 million people and $76 billion in 2013. The program, which falls under the aegis of the USDA, delivers roughly nine times more food to people than the entire Feeding America network, which includes food banks.

Jess Powers, who’s worked with several food assistance programs, says that this method — transferring money, rather than bags of produce — is better in a lot of ways. For one thing, she says, “it’s just more efficient.” SNAP recipients simply pay for groceries using an electronic benefits card. Also, people have more freedom to buy what they need, and the money they spend helps local businesses.

“It has this multiplier effect in communities, and it’s actually a better economic value because it creates economic activity,” Powers says. Unlike the new USDA commodity purchases, though, SNAP does not solve the problems of farmers who’ve lost restaurant sales due to the pandemic.

Food banks themselves, in fact, are among SNAP’s biggest fans. “Those of us in the anti-hunger community, we truly believe that SNAP is far and away the most important component of our social safety net against hunger in our country,” says Craig Gundersen, an economist at the University of Illinois who also works with Feeding America.

Yet SNAP doesn’t enjoy the same bipartisan applause as food banks. Over the years, many politicians — mostly conservatives — have tried to restrict access to the program, citing relatively small scale abuses by recipients.

Before the current crisis, the Trump administration had moved to cut access to SNAP for hundreds of thousands of people. It has since put those moves on hold, and it is allowing states to increase SNAP benefits to families that currently don’t get the maximum amount. Some anti-hunger groups are calling on the USDA to go further, and boost the maximum amount of SNAP benefits that people can get.

Gundersen says food banks do have a big role to play, and they have some distinct advantages. Unlike SNAP, anybody can show up and get food, with no proof of citizenship required and no complicated application procedure. “People may run out of money at some point over the course of the month, and they have their local food pantry where they can go get more food. Wonderful!” Gundersen says.

But food pantries aren’t big enough to do what SNAP does. Even with billions of dollars worth of extra food donations, they mainly just fill in the gaps.

Puerto Rico, however, is in a notably different situation than the rest of the country. Instead of SNAP, Puerto Rico has a program called the Nutrition Assistance Program, which delivers significantly less aid to people on the island. And unlike SNAP, which spends more money when more people qualify for benefits, Puerto Rico’s program has a fixed budget, which means that in tough times, like today, each deserving person has to make do with less assistance.

As a result, charitable organizations in the territory have been shouldering a bigger share of the burden, and a leading food distributor in Puerto Rico, the Caribbean Produce Exchange, will soon be delivering food to them under a new USDA contract worth $107 million.

Gualberto Rodriguez, the company’s president, says he’s gotten used to working with community organizations. After Hurricane Maria, the company also delivered food to them under contracts with the Red Cross and the Federal Emergency Management Agency.

“We’re a much poorer community here. So one thing we have is just a lot more webs of help that are embedded in our community,” he says. “These are not strangers taking care of strangers. These are our neighbors taking care of neighbors. So it’s a very special thing that happens when we go through these situations in the Caribbean and in Puerto Rico, in particular.”

But when asked whether it would be better to transfer money instead, so that people could buy food from local businesses, Rodriguez paused.

“It’s a great question,” he said, finally. “I believe the commercial system works really well, if you empower people with the money to buy from it. It creates entrepreneurial activity where people figure out a way to address the needs of that person who has purchasing power. So I think it would [be better.]”