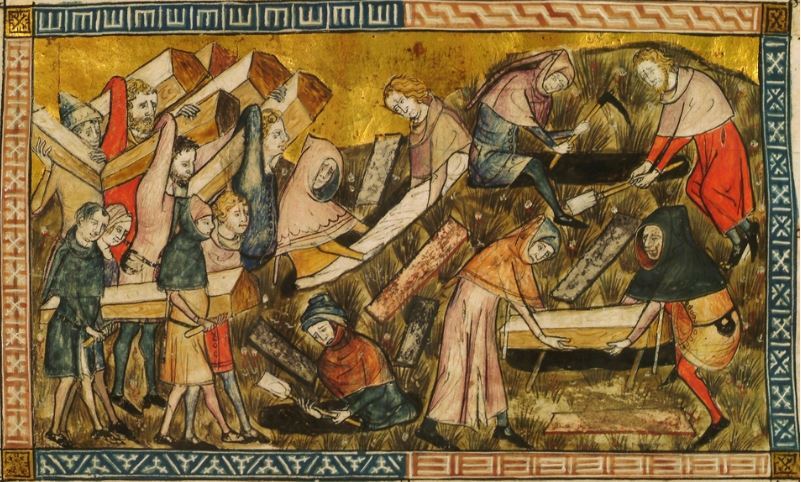 “Protect me and save me,” a very old song goes, “and take out of me, o martyr, the harmful weakness called epidemic.”

Translated from Latin, “O Sancte Sebastian” by early Renaissance composer Guillaume Dufay calls on Saint Sebastian to save the singer from a life-threatening illness — in this case, probably the bubonic plague.

Throughout history, people have turned to music during disease outbreaks as a way to seek spiritual guidance, express pain or even educate others about hygiene. The current moment is no exception.

In recent months, artists around the world have been following this centuries-old tradition by singing about the ways the coronavirus pandemic has transformed our lives.

After rapper Cardi B posted a short video to Instagram of herself talking about the virus, and it, well, went viral, Brooklyn DJ iMarkkeyz sampled her cries of “Coronavirus!” into a popular song online.

Musicians in several African countries, including Ugandan musician and politician Bobi Wine, created a song to raise awareness about COVID-19, while U.S. artists like Bad Bunny and Gloria Estefan have released tracks about stay-at-home orders.

Others, including comedian Adam Sandler, have used music to provide some humor during quarantine. For fans of Broadway, this coronavirus remix of Les Miserables’ “One Day More” may be a welcome distraction.

In light of these modern takes, we asked several historians to highlight some older songs that were born out of epidemics.

Music as medicine during the the Renaissance

Today, we often approach music as entertainment or else as austere works of art. Renaissance musicians readily recognized much broader functions for music.

For one, music was treated as a medicine that was able to temper the bodily humors, preserving or restoring a listener’s health. Music was also commonly used for spiritual ends, as offerings to holy patrons, either to curry divine favors, or else to give thanks for favors received. In a society constantly threatened by plague — a biological scourge sent ultimately by a punitive God — music could be a useful double-medicine. It is likely for this reason that surviving Renaissance compositions explicitly responding to plague are overwhelmingly religious in character.

“Stella celi extirpavit” is a hymn asking Mary to keep a hold on the stars that are killing us mortals. (Doctors thought that certain planetary alignments corrupted the air on Earth and brought about plague.) This hymn text was set to music many times, and its popularity reflects a general belief in the Virgin’s role as a “clement mediatrix” who can allay the wrath of God. This hymn attracted some controversy; religious reformers thought the line “hear us, for your Son who honors you denies you nothing” exaggerated Mary’s power and was therefore theologically suspect. Walter Lambe’s setting, an especially sumptuous work for four voices, dates from around 1480.

“O beate Christi confessor,” is an anonymous motet to St. Rocco, a popular saint invoked against the plague. This work was published in 1543. Like “Stella celi,” this work asks the holy intercessor to undo the natural cause of plague by improving the foul air.

“Santo Guerrier,” published in 1582, commemorates a disastrous outbreak of plague in Milan between 1576 and 1578. During this catastrophe, the citizens of Milan decided to build a new temple to Saint Sebastian, the most popular plague saint of medieval and renaissance Europe, pledged to hold annual devotions to the intercessor. This composition recollects these offerings and pledges. In a way, this work functioned as a kind of public service announcement — not unlike songs today reminding us to keep our distance or wash our hands — that reinforces the importance of vigilant piety. And it does so in a highly evocative and captivating way, too, with dissonances to depict the idea of suffering, or downward leaps to describe the fall of Milan.

— Remi Chiu, author of “Plague and Music in the Renaissance”

Got the flu pandemic blues

It is no coincidence that the 1918 influenza pandemic found cultural expression in the blues within the United States. Two songs told the story of the crisis, and in both cases viewed the catastrophe as an act of God.