President Trump signed an executive order on Tuesday encouraging police departments to improve training — a step critics say falls short of what is needed to curb police officers’ use of force against nonwhites.

The order comes as the president faces tremendous pressure to take action following the killing of George Floyd at the hands of police last month. 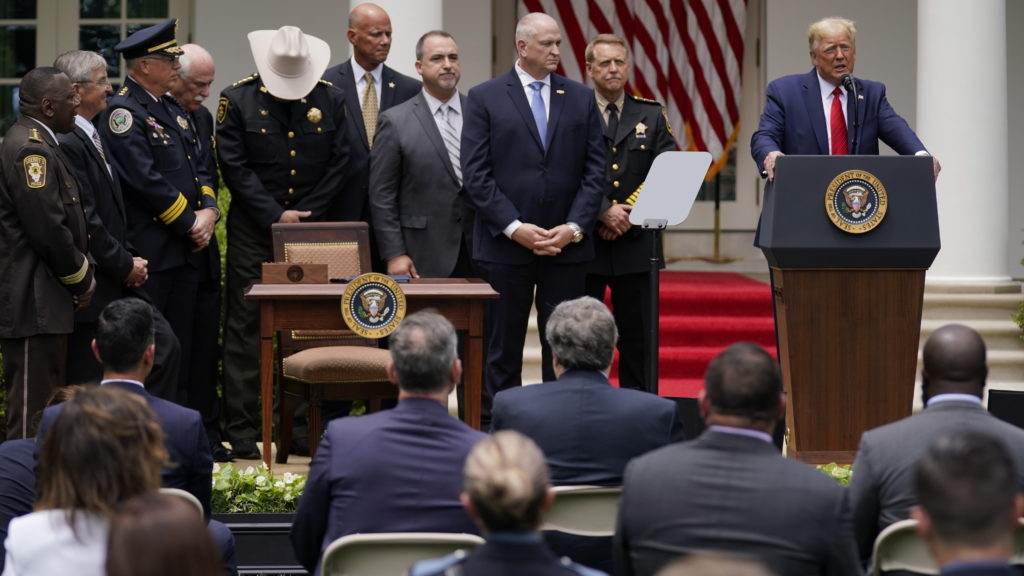 President Trump speaks during an event on police reform in the Rose Garden of the White House Tuesday. CREDIT: Evan Vucci/AP

In a Rose Garden ceremony, which at times sounded like a campaign speech, Trump largely defended police officers, saying Americans “demand law and order. They may not say it, they may not be talking about it,” he said, “but that’s what they want.”

The text of the order is available here.

The order will create a database to track police officers with multiple instances of misconduct, and use federal grants to encourage departments to meet certain higher certification standards on use of force.

It would also call on departments to involve social workers and mental health professionals on calls dealing with homelessness, mental illness and addiction.

Questions over limits to power

The order also calls for police departments to ban the use of chokeholds except when an officer feels his or her life is endangered.

It wasn’t immediately clear what practical effect that might have given questions about Trump’s powers over what is mostly state and local authority for law enforcement and the shortcomings in the history of attempts to ban neck restraints.

Republican Rep. Jim Jordan called the order a “tremendous step forward in improving the system and beginning a new era in the relationship between communities and the police officers that keep them safe.”

Critics, however, faulted what they called an empty photo op in which Trump was happy to pose with law enforcement authorities but which likely will not result in practical chances to policing for much of the country.

House Speaker Nancy Pelosi, D-Calif., said “The President’s weak Executive Order falls sadly and seriously short of what is required to combat the epidemic of racial injustice and police brutality that is murdering hundreds of Black Americans.”

The Rev. Al Sharpton, who eulogized Floyd, said that as long as there is an exception to a chokehold ban that permits an officer to invoke fear for her or his life, police officers will continue to use it.

Trump’s executive order is toothless and meaningless. We don’t need studies, we need police that commit crimes to be punished. All police that use chokeholds claim their lives were threatened, what’s new?

The executive order does not address concerns by many that police treat African Americans and people of color unfairly. The focus, instead, is on breaking down barriers and bringing communities together and not demonizing the police, Trump said.

On Tuesday the president, as he has in the past month, forcefully defended law enforcement, saying the number of bad officers was “very tiny.”

“The vast majority of police officers are selfless and courageous public servants. They are great men and women,” he said. And he denounced what he termed “radical and dangerous” proposals to defund police departments, asserting that many departments are, in fact, underfunded and under supported.

Some activists responding to recent killings by police have rallied behind the slogan “defund the police,” which they say would involve taking some money given to departments today and using it for mental health, social work and other functions apart from patrol-style policing.

Trump and Republicans have seized on what they call extreme ideas about abolishing police departments altogether.

Before signing the order on Tuesday, Trump said he met with several families whom, he said, lost loved ones “in deadly interactions with police.”

Said Trump: “To all of the hurting families, I want you to know, that all Americans mourn by your side, your loved ones will not have died in vain.”

The precise details weren’t immediately clear but according to at least one report, the mother of a Pittsburgh boy who was killed by police said she had traveled to Washington for meetings this week but would not talk with Trump.

Michelle Kenney — whose 17 year-old son, Antwon Rose, was killed in 2018 — said on Facebook that she wants action from Congress on law enforcement but that she does not want to talk with Trump, Pittsburgh’s KDKA TV station reported.

Trump touted positive economic news and steps that his administration has taken to assist minority communities such as empowerment zones and aid to historically black colleges and universities.

Trump also said “We must build upon our heritage, not tear it down” — an apparent reference to the dismantling of Confederate and other statues around the country.

The White House also is in a political confrontation with Congress over the apparent expansion of bipartisan support among lawmakers to rename U.S. military facilities named for Confederate commanders.

Meanwhile, the Senate Judiciary Committee has convened a hearing Tuesday afternoon on policing and community relations as Senate Republicans continue work on a policing bill they are expected to unveil this week.

The Democratic-led House of Representatives has introduced a bill that would, among other measures, also ban chokeholds.