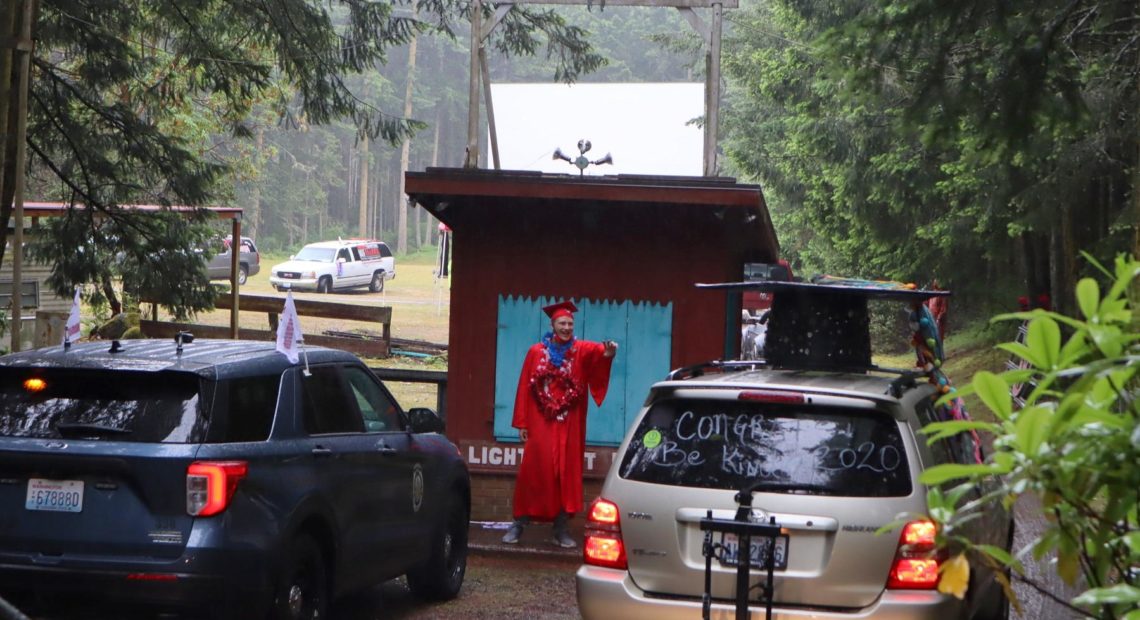 Now Showing At The Drive-In: Class Of 2020 High School Graduation

An iconic, but disappearing American institution — the drive-in movie theater — came to the rescue of the senior classes in several Pacific Northwest communities this month. As luck would have it, a drive-in cinema is well suited for a socially-distanced graduation ceremony.

Four Walla Walla Valley high schools held their 2020 graduation ceremonies at the M-F Drive In Theater, which is on the outskirts of Milton-Freewater, Oregon. Then last Friday, Port Townsend High School sent off its senior class at their local drive-in theater in northwestern Washington.

“I was very surprised when I heard that we would be having our graduation ceremony take place here at the drive-in,” said class president Dylan Tracer, wearing a bright red cap and gown in the school colors. “I kind of like it being here. It’s different.” 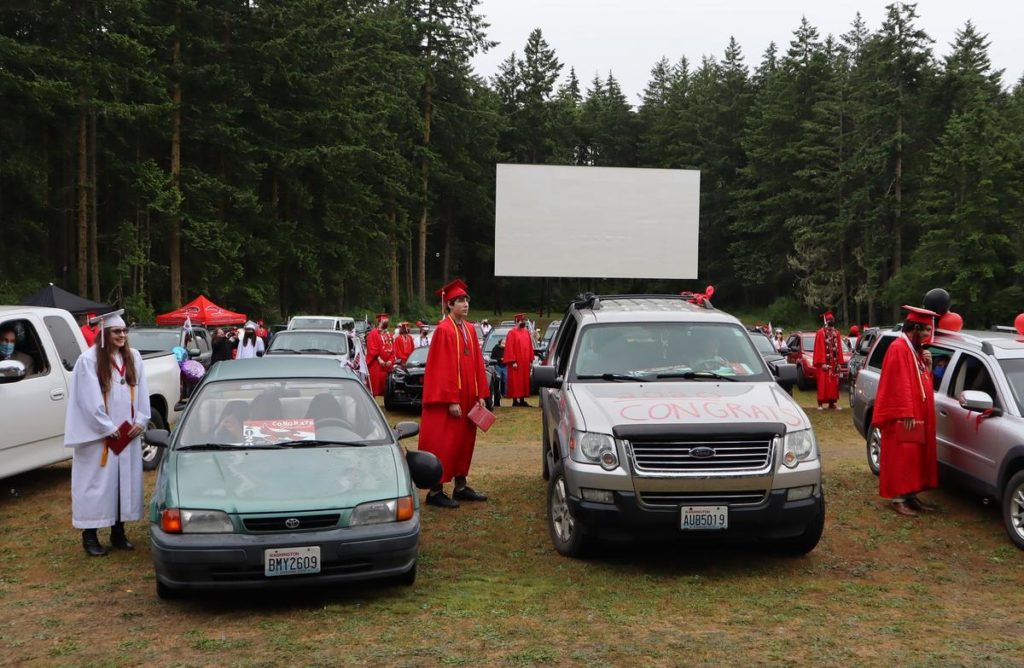 Port Townsend High School seniors looked to a temporary stage near the back of the drive-in theater, rather than toward the big screen, during their graduation on June 12, 2020. CREDIT: Tom Banse/N3

For Port Townsend’s senior class, it had been nearly three months since they had all been together. Principal Carrie Ehrhardt said the high school leadership started thinking in late March about how to pull off a safe graduation ceremony, soon after schools closed statewide because of the coronavirus.

“The message that came through loud and clear was what they wanted more than anything was to be together,” Ehrhardt said in an interview. “That was the impetus behind how are we going to make that happen for these kids.”

The most common graduation formats chosen by high school principals this spring involved either a virtual ceremony streamed online or staging some sort of drive-by celebration where graduates received their diplomas one at a time.

Ehrhardt placed a call to the operator of the Wheel-in Motor Movie drive-in theater in Port Townsend. Rick Wiley, a school alumnus and the third-generation owner of the tree-rimmed outdoor cinema, readily agreed to host a drive-in graduation event at no charge.

ALSO SEE: In Pendleton, Rounding-Up High Schoolers To Grab Life By The Horns Before An Unusual Graduation

“Port Townsend High School, I don’t mean to toot my own horn, is very lucky that they live in a community that actually has a working drive-in theater,” Wiley said in an interview. “There are only five of us in the entire state of Washington.”

Ehrhardt and Wiley said the event setup passed muster with the county health department because attendees mostly stayed in their cars. They could listen on their car radios to the speeches piped into the theater’s sound system from an improvised stage on a flatbed trailer. Frequent choruses of car honks replaced the usual bursts of audience applause.

The biggest downside of the drive-in graduation event for Port Townsend High School was the venue capacity, which limited each family of a graduate to one vehicle. The class of 2020 had 84 graduates, who wore cloth face masks as they stood beside their cars to receive diplomas from school board or faculty members who passed down each row. 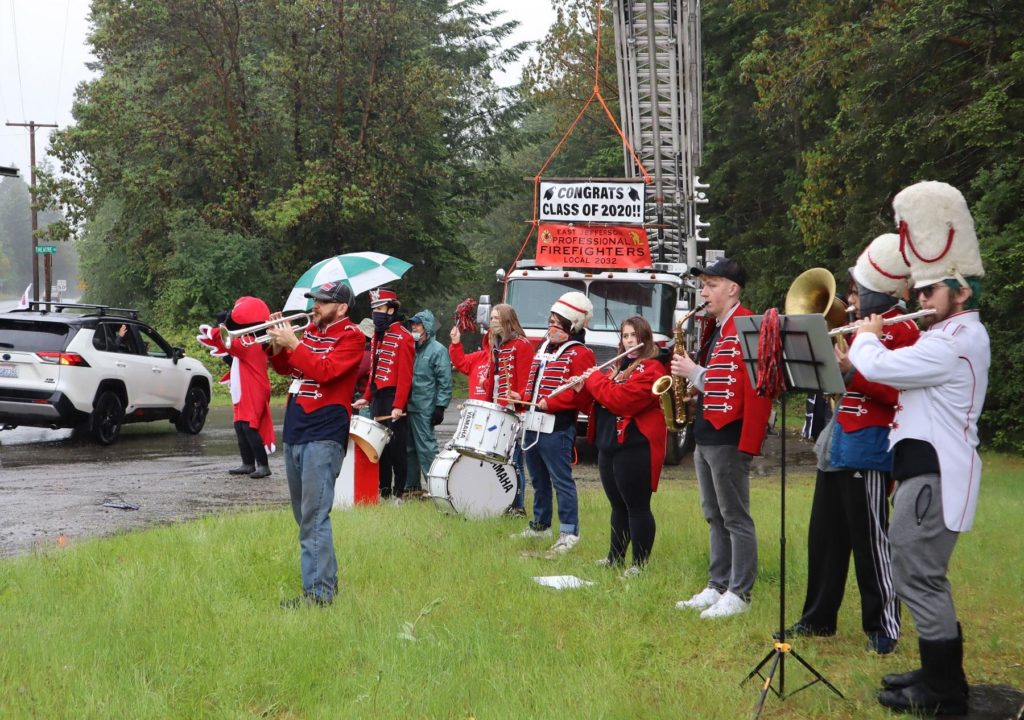 “We’re in such a time right now where coming together is much more difficult and much more imperative than usual,” said Lily Montgomery, another member of the PTHS graduating class. “The fact that we’ve done that for graduation has just made it that much more impactful for the students.”

“I don’t think I’m going to forget this for a long time,” she concluded.

The late afternoon ceremony in Port Townsend did not utilize the drive-in theater’s big screen. By contrast, the string of nighttime graduations over the two weeks before at the Milton-Freewater drive-in did.

Second-generation owners Mike and Laurie Spiess first hosted Weston-McEwen High School’s graduation on May 28. That was followed by Lincoln High School of Walla Walla, then DeSales Catholic High School, and finally Walla Walla High School, which was so large it had to spread the graduating class over two nights.

Mike Spiess said the smaller schools, Weston-McEwan and DeSales, offered a mixture of live presentations on a temporary stage and pre-taped video segments. Both concluded their graduations with a ten minute fireworks show that fired off from behind the big screen.

Spiess said the first time for holding high school graduations at the drive-in might not be the last time, judging from the reviews shared with him.

“That was way better than sitting in the stinky school gym,” said Spiess, relaying what he heard afterwards. “Let’s do this again next year and then we can sit out in our lawn chairs hopefully.”

The bigger public high schools from Walla Walla pre-recorded all of the graduation ceremony elements and had a drive-in experience most closely resembling a typical movie showing. In between the high schoolers, the Oregon border drive-in also hosted an eighth grade moving up ceremony for Waitsburg Middle School, where Spiess happens to teach.

The Milton-Freewater drive-in is one of only four outdoor movie theaters left in operation in Oregon. The others are in La Grande, Newberg and Sutherlin. 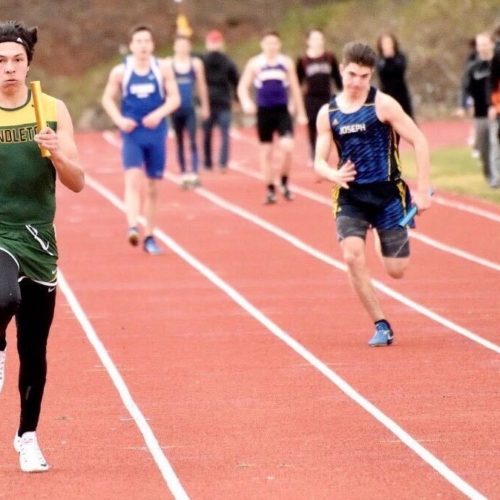 In Pendleton, Rounding Up High Schoolers For A Graduation Before Grabbing Life By The Horns

Marcus Aaron Luke was a leader on his varsity track team, and also a senior at Pendleton High School. Now, like seniors everywhere, he’s missing a traditional graduation. But the city’s famous Round-Up grounds have a fix. Continue Reading In Pendleton, Rounding Up High Schoolers For A Graduation Before Grabbing Life By The Horns