Democratic Kentucky State Representative Charles Booker says “justice failed us” when only one of the three officers who were involved in the killing of Breonna Taylor in Louisville was charged.

The officers — Jonathan Mattingly, Brett Hankison and Myles Cosgrove — entered the home that Taylor was sleeping in with a no-knock warrant. Kentucky Attorney General Daniel Cameron announced Wednesday that Hankison would be charged with wanton endangerment for firing his weapon into neighboring apartments. He did not charge any officers with Taylor’s death.

Breonna Taylor, here in December, would have turned 27 on Friday. Her friends and family remember Taylor as a caring person who loved her job in health care and enjoyed playing cards with her aunts. Courtesy of the Taylor family

Cameron also said he is going to create a task force that will review the process by which police officers get and execute search warrants.

“We’ve seen a lot of task force groups that have been created over the years,” Booker told NPR’s Noel King. “We know not to hold our breath.”

Booker told NPR’s Morning Edition that there are many more changes he hopes will go into effect beyond the initiation of a task force. He co-sponsored Breonna’s Law, which would get rid of no-knock warrants statewide and require body cameras to be on. He’s calling for citizen review of police shootings with subpoena power, too.

“We can do those things right now — addressing qualified immunity cases, working to amend contracts so that there can be accountability with law enforcement in these types of instances — we can do those things,” he said. “But what we can’t do is hide behind rhetoric and process and dance away from so much pain and trauma that people of the commonwealth of Kentucky are feeling right now.”

Booker talked with NPR about why the charges made on Wednesday were failures and what to do next.

Here are excerpts of the Morning Edition interview:

What would justice have looked like in your view? What did you want to happen here?

When I said the words that “justice failed us” yesterday, I was speaking to a truth that essentially says that if you look like I do or come from where I come from or where Breonna comes from, that your life can be dismissed, your humanity can be seen as irrelevant or not considered at all. And throughout this process, transparency was never there. The community was left in the dark. Leadership, even elected leaders like myself, we were left in the dark. That is what I mean by justice being fully accountable and transparent and giving people the chance to know that the life of a woman, of a young person that was trying to pursue her dreams, that her life had value and meaning because we know it does. 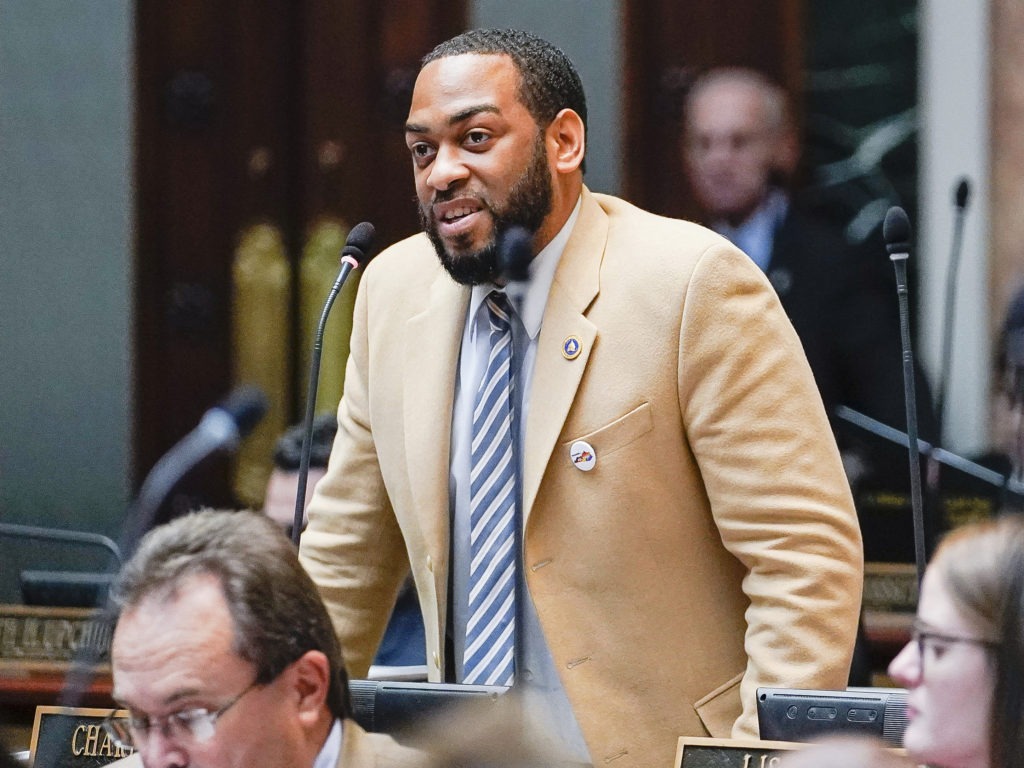 Kentucky Democratic State Sen. Charles Booker advocates for the passage of Kentucky HB-12 on the floor of the House of Representatives in the State Capitol, Frankfort, Ky., on Feb. 19, 2020. CREDIT: Bryan Woolston/AP

When Attorney General Daniel Cameron finished speaking yesterday, what were the questions in your mind that were unanswered? What did you want to know that he hadn’t said or shared?

The question for me was: Did the attorney general even recommend charges for the other officers at all? It appeared that he picked the facts that would fit with his framing as a way to back away from saying that the officers that actually shot Breonna Taylor had any liability and he continued to say that it was justified. And that sits with me, even right now, because the indictments — the three that were brought against one of the officers regarding wanton endangerment — accounts for the shots that went into other apartment buildings but there’s no accounting for the shots that went into this person, this human being. And there seems to be a very arrogant disregard for that.

To hear Booker’s Morning Edition interview, click on the audio button above.