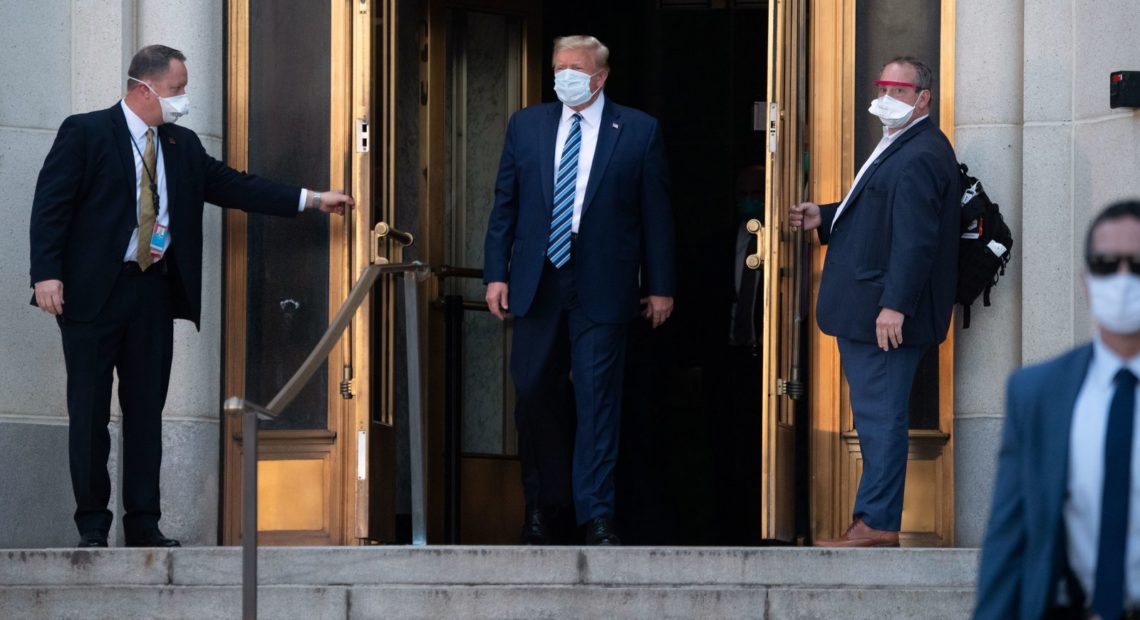 ‘Don’t Be Afraid Of It’: Trump Dismisses Coronavirus Threat As He Returns To White House

President Trump walked out of Walter Reed National Military Medical Center on Monday evening, planning on receiving the remainder of his treatment for COVID-19 at the White House.

He was seen pumping his fist in the air on the way out of the building and didn’t respond to any questions from the press. Upon arriving back at the White House, Trump walked up the staircase of the South Portico entrance, removed his mask, gave reporters standing below a thumbs-up and saluted Marine One. 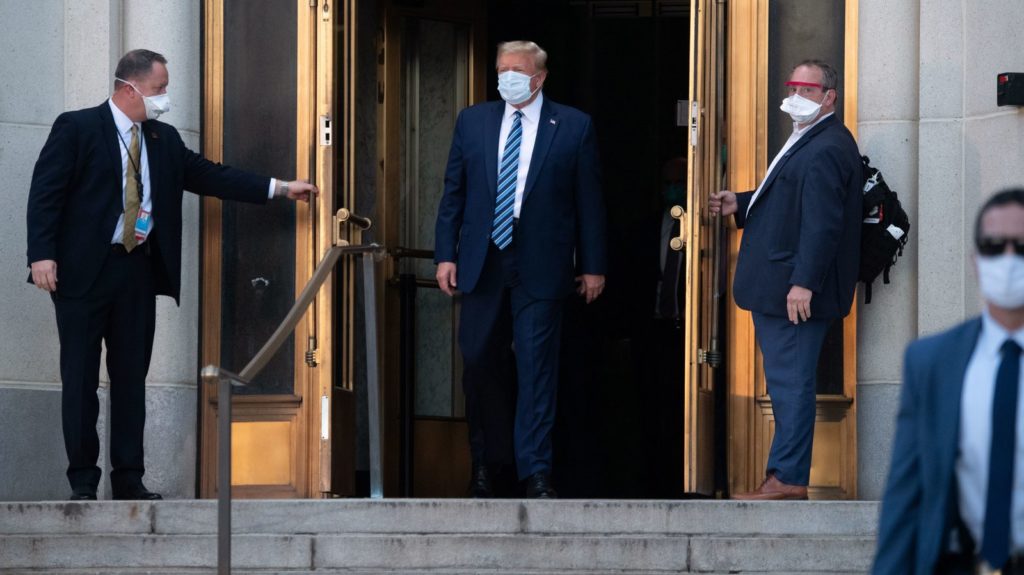 President Trump walks out of Walter Reed National Military Medical Center in Bethesda, Md., on Monday evening before heading back to the White House. CREDIT: Saul Loeb/AFP via Getty Images

More than 200,000 people have died from the coronavirus in the U.S.

Trump said he “didn’t feel so good” when he got the virus but “felt great” two days ago, “better than I have in a long time.”

Earlier Monday, Trump tweeted his plans to leave the facility. His doctors later reiterated it was safe for him to return to the White House but that his treatment regimen is ongoing.

Meanwhile, a number of Trump’s associates at the White House and with the campaign have also tested positive for the coronavirus.

Yet Trump sounded particularly optimistic in his tweet announcing his impending return.

“Feeling really good! Don’t be afraid of Covid. Don’t let it dominate your life. We have developed, under the Trump Administration, some really great drugs & knowledge. I feel better than I did 20 years ago!” Trump wrote.

His medical team briefed the press on his health status Monday afternoon and confirmed the president would be returning to the White House.

Sean Conley, Trump’s physician, said although Trump may not be “entirely out of the woods yet,” he believes he is ready to get his care at the White House.

“We’re in a bit of uncharted territory when it comes to a patient that received the therapies he has so early in the course,” Conley said.

“If we can get through to Monday with him remaining the same or improving, better yet, then we will all take that final deep sigh of relief.”

He added that the White House Medical Unit will deliver “24/7, world-class medical care” and “we’re not going to miss anything that we would have caught up here.”

Trump first arrived at Walter Reed on Friday night after sharing the news of his positive coronavirus test early that morning.

During a briefing Sunday, Trump’s physicians shared that the president had received his first dose of the steroid dexamethasone on Saturday after two drops in his oxygen levels and is undergoing a five-day course of remdesivir. Dr. Brian Garibaldi told reporters on Monday that Trump would get a fifth dose of remdesivir at the White House on Tuesday night and that he continues to receive a steroid.

Conley would not go into details regarding the president’s lung scans, citing patient privacy regulations, and refused to say when Trump’s last negative coronavirus test was, saying, “I don’t want to go backwards.”

He said Trump had not been on any fever-reducing medication for more than 72 hours.

When asked whether Trump had experienced any side effects from the medications, including mental fogginess, Conley simply said, “I think you’ve seen the videos and now the tweets, and you’ll see him shortly, you know, he’s back.”

Conley didn’t give an answer on where in the White House Trump will stay, saying, “We’re going to do whatever it takes for the president to safely conduct business wherever it is he needs to do within the residence and White House.” (In a video Saturday night, Trump said he had preferred to go to Walter Reed over the weekend rather than be “locked up” in a room in the White House.)

Conley declined to comment on Trump’s tweet that people shouldn’t be afraid of the coronavirus, a striking statement as the American death toll climbs past 210,000.

As for potential travel for the president, Conley said, “We’ll see.”

But Trump appears eager to get back on the campaign trail, tweeting shortly before he departed Walter Reed, “Will be back on the Campaign Trail soon!!! The Fake News only shows the Fake Polls.”

Since being admitted for treatment, Trump has worked to convey an image of strength and normalcy. The White House insisted the president has continued to carry out his duties, releasing photos of him purportedly working in the hospital. Trump has also shared video messages on Twitter.

On Sunday, Trump made an unannounced motorcade visit outside the facility to greet supporters gathered there.

The timeline of Trump’s symptoms from the coronavirus has been at times murky, with inconsistencies between the medical briefings and statements from White House officials.

The discrepancies have led to concerns about the transparency of the administration on the president’s battle with the coronavirus.