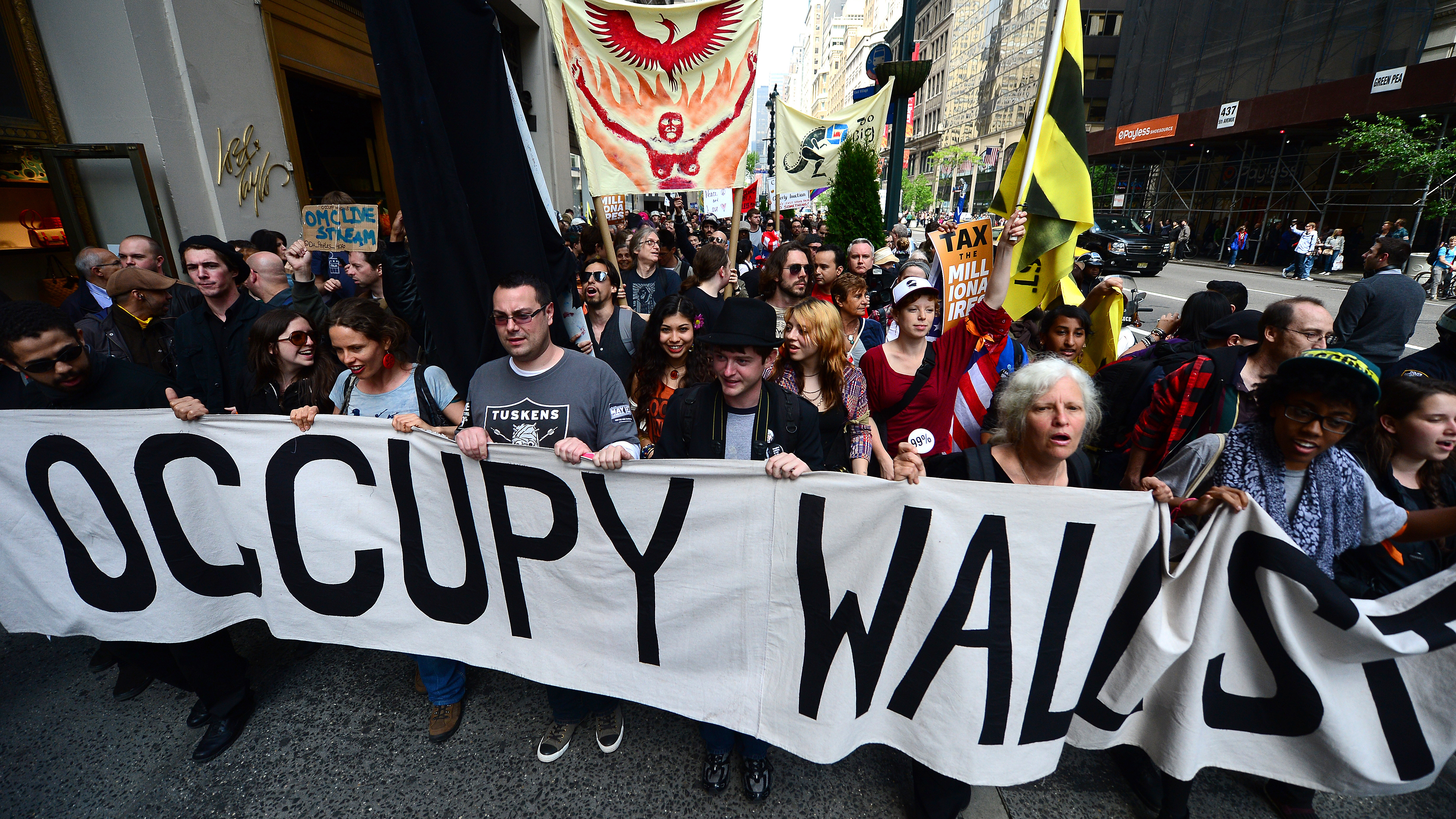 ‘The Game Is Rigged’: How Fury Over The Great Recession Fueled The Reddit Trade

James McCombs was 13 years old in 2008 when he found out the money set aside for his college tuition was gone.

“I was old enough to know what was going on, and old enough to hear my parents’ conversations,” he remembers. “Old enough for them to tell me that the college fund was gone.”

The fund had been tied up in the stock market, and it didn’t survive the market crash sparked by the global financial crisis.

McCombs, now a real estate agent in Lincoln, Neb., says his life got thrown off track. He got into an expensive school in New York, but couldn’t afford it — so he took out loans to attend a state school.

Those costs also proved overwhelming, and he dropped out. Years later, he’s still paying off those loans.

“Basically my future got mortgaged, it got put on hold and stolen from, and that happened all over the country,” he says. 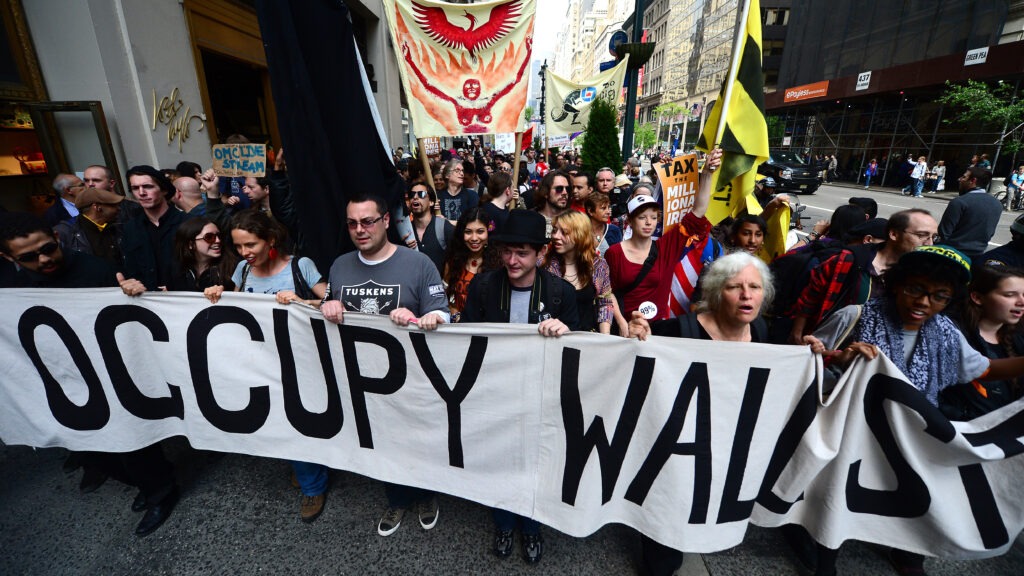 Occupy Wall Street participants march down Fifth Avenue in New York on May 1, 2012. Lingering anger over the 2008 global financial crisis has fueled several populist movements, including most recently, the battle waged by amateur investors coordinating in Reddit against hedge funds.
CREDIT: Emmanuel Dunand/AFP via Getty Images

Today McCombs is part of the Reddit community of amateur investors who shocked Wall Street by handing severe losses to hedge funds shorting stocks of companies such as GameStop and AMC Theatres.

And like many of his fellow Redditors in WallStreetBets, the forum that fueled the trades, the anger from the economic chaos of the Great Recession still feels very raw for McCombs.

So much so, that he found himself buying the stocks being shorted by hedge funds. And he was motivated not so much by profit, but the burning desire to hit back at the Wall Street firms he blames for sparking the global financial crisis.

“Now we have an opportunity to take it back,” McCombs says, referring both to some of the money his parents lost in the 2008 turmoil and also regaining some sense of control.

WallStreetBets started as an investment forum — and its moderators continue to insist it is just that as the group has now grown to boast nearly 9 million members.

But interviews with some of its members and an examination of its threads also show something else — that it’s morphed into a movement of sorts, riding a giant wave of unresolved anger from the Great Recession.

That crisis was not caused by hedge funds alone. Instead, it was an accumulation of risky investments by financial institutions that eventually imploded.

The implosion led to such widespread economic pain that it’s fueled populist movements, like the Tea Party, Occupy Wall Street — and now, WallStreetBets.

“I vividly remember the enormous repercussions that the reckless actions by those on Wall Street had in my personal life, and the lives of those close to me,” one post by Reddit member ssauronn says.

The Redditor recalled a year where money was tight and food was scarce.

“We have a once in a lifetime opportunity to punish the sort of people who caused so much pain and stress a decade ago, and we’re taking that opportunity,” ssauronn also says, in a post that has sparked more than 8,000 comments.

Erin Capparelli, a 40-year-old delivery driver in Florida, is another Redditor motivated by the desire to hit back at Wall Street after the Global Financial Crisis.

Capparelli made her first stock investment — of a few hundred dollars — in GameStop shares back in January, at first hoping to make some extra cash.

But when apps like Robinhood limited trading in shares being targeted by Redditors, Capparelli says her feelings shifted.

“As soon as that happened, the whole sentiment changed to, ‘This is messed up, the game is rigged, it’s against us,'” she remembers.

Robinhood placed the trading restrictions because of more technical reasons related to requirements needed to process trades being placed by its customers. But many Redditors saw it differently, believing it was being done to hamper them.

The limits made Capparelli think back to 2008, when her career growth stalled and she witnessed family and friends fall into hard times.

That’s when her priorities shifted, and she started seeing her investment in GameStop as a protest, a way to fight back against Wall Street, even if she loses money doing it.

“It always falls back on the little guy,” Capparelli says. “We’re not too big to fail. We can easily fail.”

WallStreetBets is not the only movement to be fueled by anger from the global financial crisis.

Nelini Stamp, 33, camped out with Occupy Wall Street in New York’s Zuccotti Park in 2011 and stayed all three months, until protesters were cleared by police.

Nonetheless, Stamp sees both movements as having the same overall goal.

“It’s obviously different tactics, but I think it comes from the same kind of sentiment, like, ‘enough is enough,'” Stamp says.

The prices of GameStop and several of the other stocks made popular on Reddit have fallen significantly, tumbling from record highs.

Though that could be seen as a setback, Laurel Weldon, author of When Protest Makes Policy: How Social Movements Represent Disadvantaged Groups, says that would be missing the point.

“Often a kind of social protest is aimed at disruption alone, it’s aimed at expressing a grievance and in doing so — I mean in some ways, you have to think that this has been a successful protest,” Weldon says.

“It’s really picking up on this anti-financial elite, stick-it-to-the-man ethos that I think is quite a powerful current in contemporary American society,” she adds.

Capparelli, the delivery driver in Florida, says the impact caused by her GameStrop trade has now taught her that there is power when people collectively put their money toward something they believe in.

And she says she will keep investing regardless of how GameStop turns out.

“Our money talks. Our money has to be our voice,” Caparelli says. “You can scream your head off in the street or throw fifty bucks at the stock market. What’s going to make the biggest difference? It’s going to be money, unfortunately.”