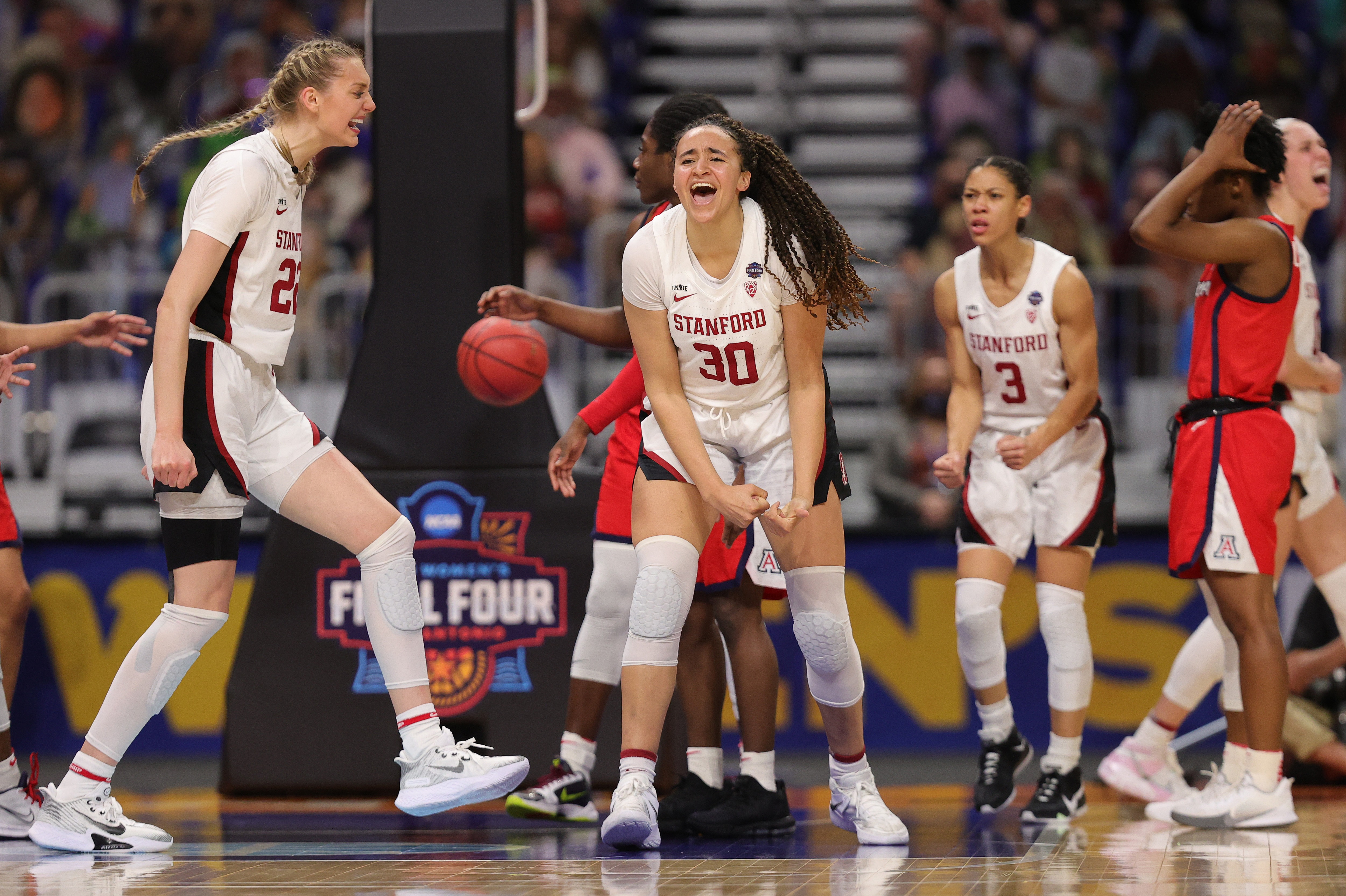 The matchup, played in front of a limited in-person audience, was the first time two teams from the Pac-12 faced off for a national title in the NCAA women’s tournament.

Time and time again, the Wildcats proved they could hold Stanford’s offense, keeping the game tight throughout. But in the end it was Stanford — led by Haley Jones, who was named the tournament’s most outstanding player — that survived the Wildcats’ persistence.

Haley Jones #30 of the Stanford Cardinal celebrates a win against the Arizona Wildcats in the national championship game of the 2021 NCAA Women’s Basketball Tournament on Sunday in San Antonio.
CREDIT: Carmen Mandato/Getty Images

The game came down to the final seconds. With under a minute left in the fourth quarter, Aari McDonald, the Wildcats’ star player, hit three of four free throws to reduce Stanford’s lead to just one point. And with less than 6 seconds to go, Arizona got the ball off a shot clock violation from Stanford.

But McDonald missed a last-second shot, giving Stanford the win.

“We accomplished a lot that many didn’t think we could do,” McDonald said in a press conference after the game. “It was tough, but I’m very proud of my teammates.”

Stanford was the first NCAA basketball champion to be crowned in two years, since last year’s tournament was canceled in March 2020 due to the coronavirus pandemic.

They were out of the gate with a dominant start, leading Arizona 16-8 by the end of the opening quarter — but Arizona’s defense early on kept Stanford from running away with the game.

In an impressive run, Arizona tightened that gap in the second quarter, weathering an unsteady start and a flurry of missed shots. Part of that shakiness came from McDonald, who scored just five points in the first half despite accounting for nearly a third of her team’s total points over the season.

But Stanford was able to push back ahead, ending the second quarter with an 11-3 run to take the lead 31-24 by the end of the first half. That lead came in spite of 10 turnovers from the Cardinal over the first two quarters.

In the third quarter, Stanford’s Lexie Hull was taken off the floor after she tried to take a charge from McDonald, but fouled instead. She was replaced temporarily by Lacie Hull, her twin sister.

Soon after, Arizona went on another run to make it a three-point game, trailing Stanford just 40-43 by the end of the third quarter. But Stanford, led by a hot streak from Jones, was able to hold their advantage.

Though they almost lost that lead in the game’s final minutes, the Cardinal staved off the Wildcats’ last challenges, ending an 87-day road trip with a championship win.

It’s been a particularly difficult year for college sports as student athletes have often had to balance virtual classes with the health risks of in-person practice and games. And teams endured hundreds of postponed or canceled games during the regular season.

The NCAA has also come under fire from critics who have pointed out inequities between men’s and women’s March Madness facilities. Following that backlash, the NCAA revealed an upgraded weight room for the women’s teams that included a larger space with more equipment.

Meanwhile, the Supreme Court heard arguments last week in a case that could mean big changes for how the NCAA compensates student athletes. Players contend that the NCAA is illegally “fixing” compensation far below what the market would otherwise allow, especially in an industry that brings in billions of dollars each year.

But lawyers for the NCAA argued that allowing for an expansion of education-related benefits could threaten the amateur status of college athletics, which they said makes NCAA play popular and distinct from the professional sports world.

Gonzaga and Baylor will face off Monday night for the men’s championship in Indianapolis, following the Zags’ buzzer-beater victory over UCLA Saturday.