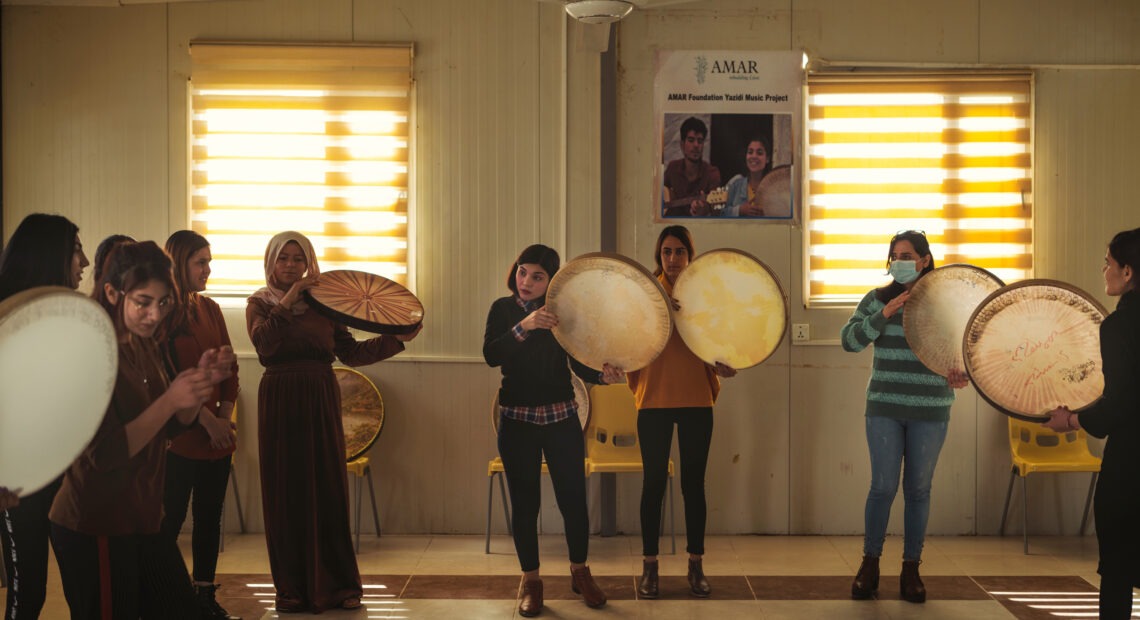 DOHUK, Iraq — With rows of white tents filling a windswept hillside, the Khanke camp in northern Iraq shelters about 14,000 men, women and children from the Yazidi religious minority. They have been stuck here since ISIS invaded their home villages in 2014.

With its dirt roads and drab dwellings, the camp can be a bleak place. But the beat of a daf, a drum sacred to Yazidis, throbs underneath loud, energetic singing, rising over shouts of children in a trash-strewn playground.

Inside a small building, a dozen young Yazidi women are rehearsing folk songs. They sing about the dawn, the harvest and the Sinjar mountain the Yazidis consider holy. Sometimes their voices harmonize gently, sometimes they rise almost to a shout as the women chant.

This is the Ashti (Peace) Choir, founded and led by 22-year-old Rana Sulaiman Halo. She has lived in the camp since 2014, and comes from a family of musicians.

For the first year after ISIS targeted Yazidis — condemning them as heretics, shooting the men and raping and enslaving women and girls — she says it was difficult to sing “because of the news around us, someone being kidnapped, someone being killed.” Her cousin is among thousands of Yazidis still missing. Thousands more were killed.

But by the second year, she says, “We went back to music again.” In 2019, she founded the choir, supported by the AMAR Foundation, a British charity. Several women in the choir were ISIS captives; others have lost many family members. 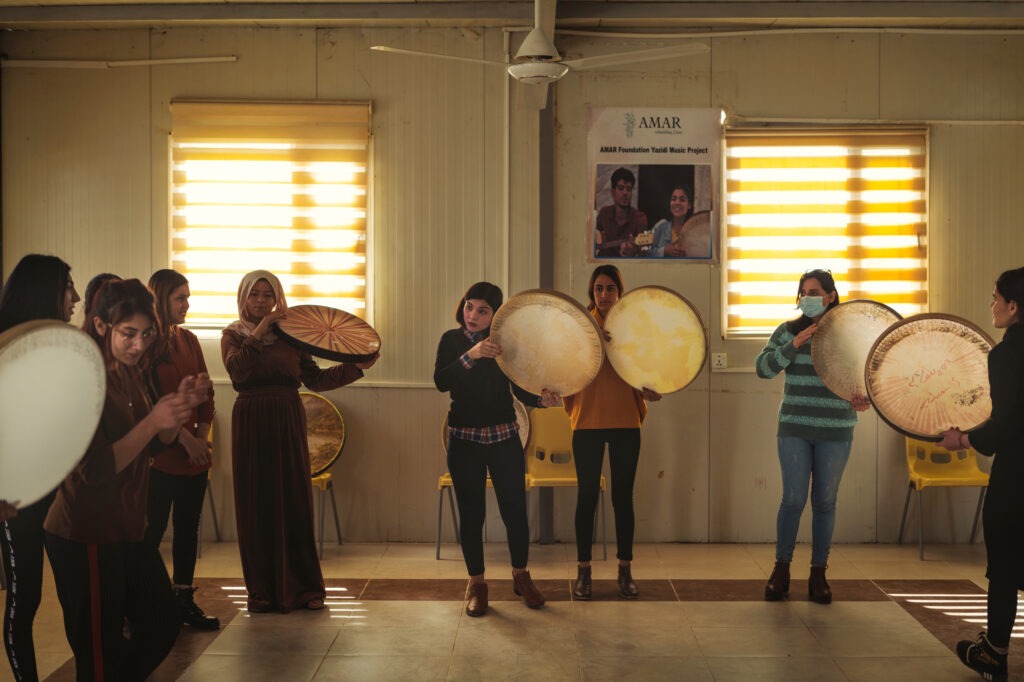 The choir has performed in the U.K. and provided music therapy to its members subjected to sexual violence by ISIS.

And it has become part of an effort to preserve a vital part of Yazidi culture, in which little is written down, and history and religion are contained within songs.

“This folk music, it’s also a kind of affiliation of our religion,” says Mamou Othman, who studies music as psychotherapy at the University of Dohuk. “There are special songs that only the Yazidis sing.”

Some, he says, are sung during religious festivals at shrines. Other songs are secular, about nature or comedy, or recounting events that took place centuries ago.

As members of the tiny religion — just a few hundred thousand people — seek asylum in Europe, Othman says their oral culture is threatened as families and villages are split up by the asylum process.

Europe is “for the individual,” he says, not for tribes or clans. And Yazidism is intimately connected with places in northern Iraq — Mount Sinjar and the holy site of Lalish, where priests also pass down religion and customs with songs.

“There is no community which connects to the land as the Yazidis do,” he says. “And because they are leaving their land, their homeland, so they are going to lose their religious identities.” 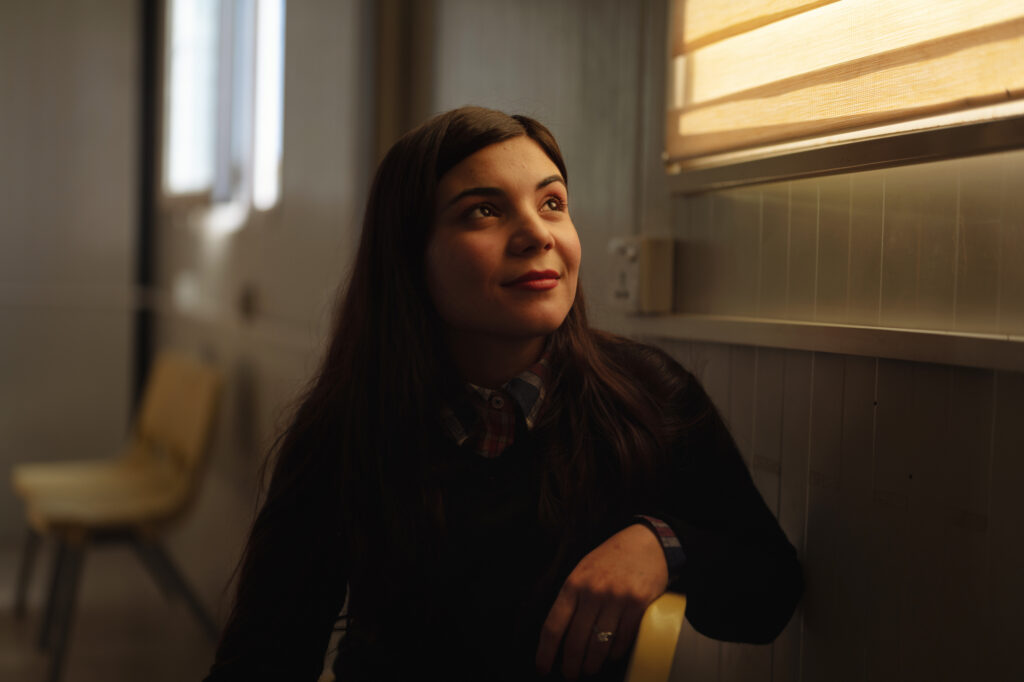 Rana Sulaiman Halo, 22, founded and leads the Ashti choir with support from the AMAR Foundation, a British charity. She has lived in the camp since 2014.
CREDIT: Emily Garthwaite/INSTITUTE for NPR

Still, some things make him hopeful. In the village of Bahzani, where religious music couldn’t be performed after ISIS attacked, young people from the traditional Yazidi priestly families are learning it again.

AMAR has recorded some Yazidi folk songs and sacred music and given the recordings to the University of Oxford’s Bodleian Library to archive. And young Yazidis, like the members of the Ashti choir, are enthusiastic about their heritage.

“They are so excited and interested in this kind of music, and this is something very nice that we are still holding our traditional music,” says Vian Darwish, a Yazidi member of Iraq’s parliament.

After the horror of 2014, she says, gatherings, festivities and singing were muted. But now, “they are trying to go on to heal, to have their normal life and not to be victimized. This is what I like about the Yazidi community in general, that they have that sense of the love of the life and they want to go on and love music, weddings, parties — having normal lives in spite of everything.”

For those staying in the Khanke camp, normal life is a distant prospect. Even though ISIS has lost almost all the territory it once held, and much of its power, Turkish forces and militias backed by Iran are among those now competing for the territory around Mount Sinjar. Conflict could flare again. It is not yet safe to go home.

And not everyone in this grief-stricken community feels like singing — or hearing music. After a recent rehearsal, the women from the choir sit on a wall and chat. Ghazal Dawoud Hussein, 21, says her family has no problem with her practicing. But another family nearby lost so many relatives, they don’t like to hear her sing.

She treats singing as an act of resistance.

“We are here to send a message to ISIS,” she says, “that we will never break.”