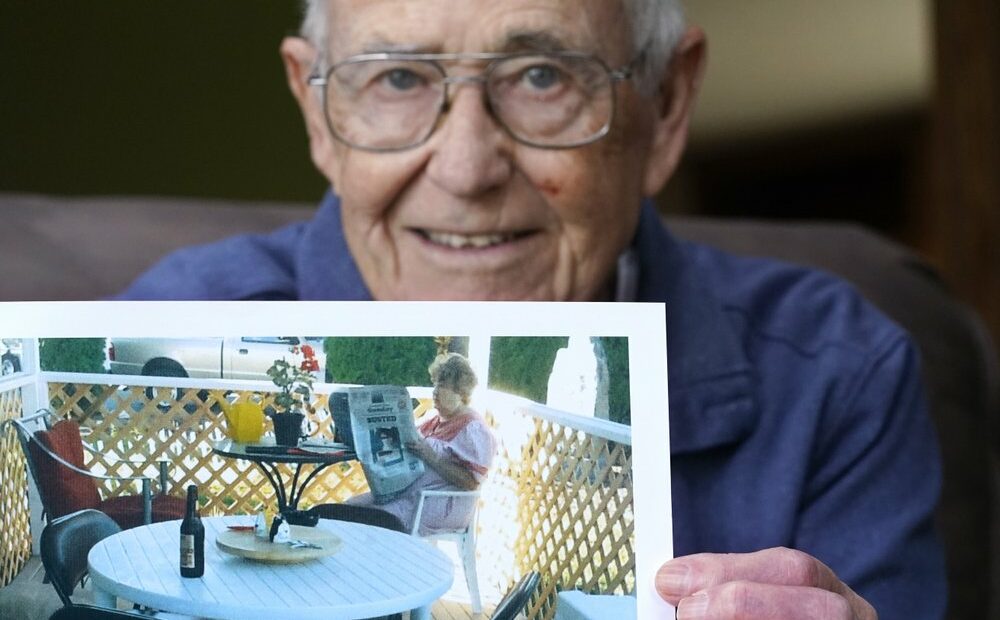 With dish soap, brushes and plastic water jugs in hand, Carole Rae Woodmansee’s four children cleaned the gravestone their mother shares with their father, Jim. Each scrub shined engraved letters spelling out their mother’s name and the days of her birth and death: March 27, 1939, and March 27, 2020.

Carole passed away on her 81st birthday.

That morning marked a year since she died of complications of COVID-19 after contracting it during a choir practice that sickened 53 people and killed two — a superspreader event that would become one of the most pivotal transmission episodes in understanding the virus.

For the siblings, the somber anniversary offered a chance at closure after the pandemic stunted their mourning. They were finally holding a memorial befitting of their mother’s footprint in the community. 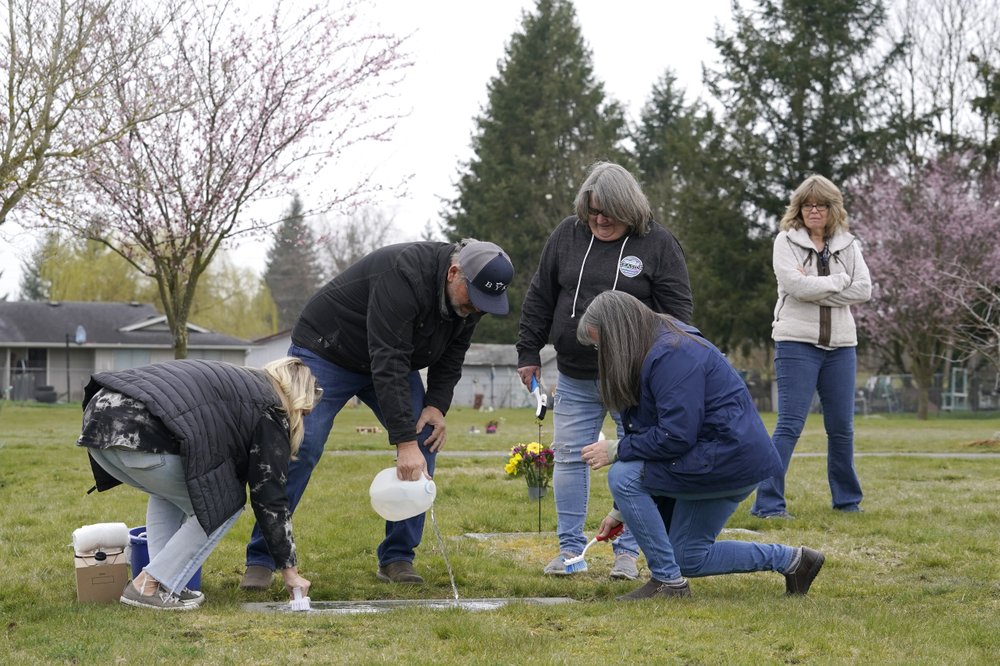 From front left, Wendy Jensen, Joe Woodmansee, Linda Holeman and Bonnie Dawson, the four children of Carole Rae Woodmansee, are joined by family friend Debbie Blazina, at right, Saturday, March 27, 2021, as they clean the headstone Carole shares with their father, Jim, who died in 2003, at Union Cemetery in Sedro-Woolley, Wash. Carole died a year ago on the same date in 2020, the day of her 81st birthday, from complications of COVID-19 after contracting it during a choir practice that sickened 53 people and killed two. CREDIT: Ted S. Warren/AP

“The hardest thing is that there was no goodbye. It was like she just disappeared,” said Carole’s youngest child, Wendy Jensen.

After cleaning, the siblings reminisce. They say their father must be happy to be back with his wife of 46 years. They thank them for being good parents and recall how their mother used to say “my” before calling their names and those of other loved ones.

“I was always ‘My Bonnie,’” Bonnie Dawson tells her siblings. “I miss being ‘My Bonnie.’”

“She had been missing Dad for a long time,” eldest sibling Linda Holeman adds. Their father, Jim, passed away in 2003.

Of the more than 550,000 people who have died of the virus in the United States, Carole was among the first. Her death came just weeks after the first reported outbreak at a nursing home in Kirkland, about an hour south of Mount Vernon. Carole, who survived heart surgery and cancer, had fallen ill at her home. Bonnie took care of her until they called the paramedics.

“You’re trying to say goodbye to your mom, and they’re telling you to get back. It was a very hard, emotional … to have to yell, ‘I love you, Mom,’ as she’s being wheeled out the door with men standing in our yard 10 feet out because they didn’t want to be near our house,” Bonnie said. 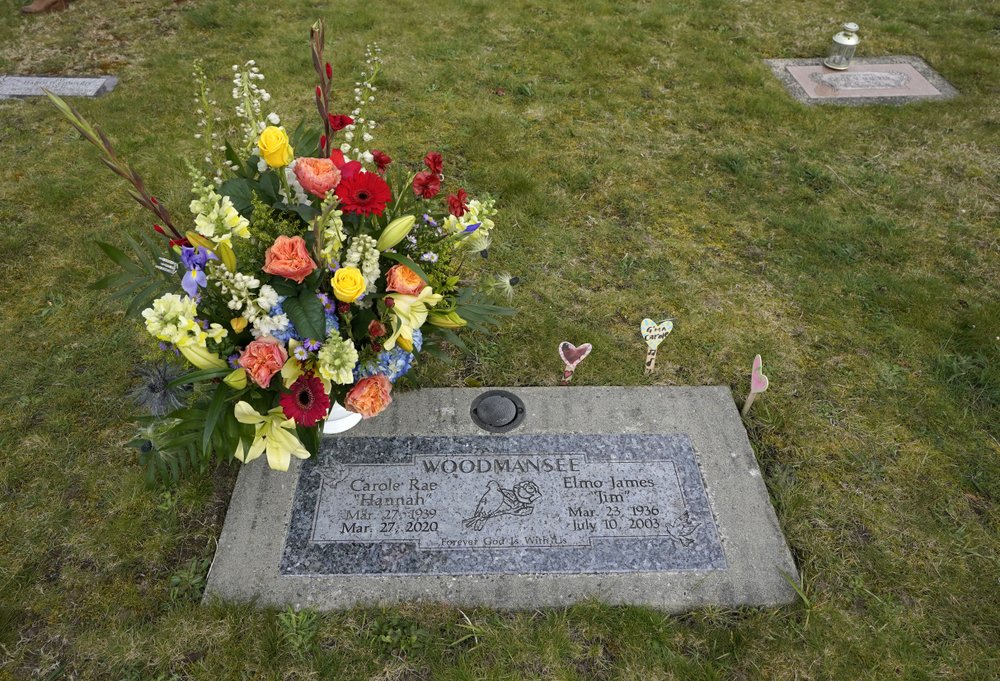 Flowers from her memorial service mark the headstone shared by Carole Rae Woodmansee and her husband Jim (who died in 2003), March 27, 2021, at Union Cemetery in Sedro-Woolley, Wash. CREDIT: Ted S. Warren/AP

The rehearsal of the Skagit Valley Chorale, a community choir made up mostly of retirees and not associated with the church where they practiced, happened two weeks before Gov. Jay Inslee shut down the state. The choir had taken the precautions known at the time, such as distancing themselves and sanitizing. But someone had the virus.

“The choir themselves called us directly, and they left a voicemail. The voicemail said a positive person in the choir, 24 people now sick,” said Lea Hamner, communicable disease and epidemiology lead for Skagit County Public Health. “It was immediately evident that we had a big problem.”

Hamner and her team went to work interviewing choir members, often repeatedly, and those with whom they came in contact after the practice, a total of 122 people. They meticulously pieced together the evening, tracking things like where people sat and who ate cookies or stacked chairs.

That level of access and detail is rare among outbreak investigations, Hamner said, so when cases waned in the county a few weeks later, she sat down to write a report.

“There was a lot of resistance to calling it an airborne disease,” Hamner said. “But we found this middle ground of this disease that can both be droplet and airborne. So that was a big shift. After the paper, the CDC started to acknowledge airborne transmission.”

The outbreak had gained notoriety after a Los Angeles Times article, prompting other researchers to study the event, further cementing the conclusion that the virus traveled through the air at the rehearsal.

“I think this outbreak in the choir is viewed … as the one event that really woke people up to the idea that the virus could be spreading through the air,” said Linsey Marr, a Virginia Tech professor and expert in airborne transmission. Marr was among 239 experts who successfully lobbied the World Health Organization to change its guidelines on transmission.

The other person who died from the choir practice was 83-year-old Nancy “Nicki” Hamilton. Originally from New York, Hamilton settled north of Seattle in the 1990s. She put out a personal ad in the Everett Herald, and that’s how she met her husband.

“We went down to the bowling alley in Everett,” said 85-year-old Victor Hamilton. “We picked it up from there.”

Hamilton hasn’t been able to hold a memorial for her. Their families are spread throughout the country, and he’d like to have it in New York City if possible. He’s eyeing June 21 — her birthday. 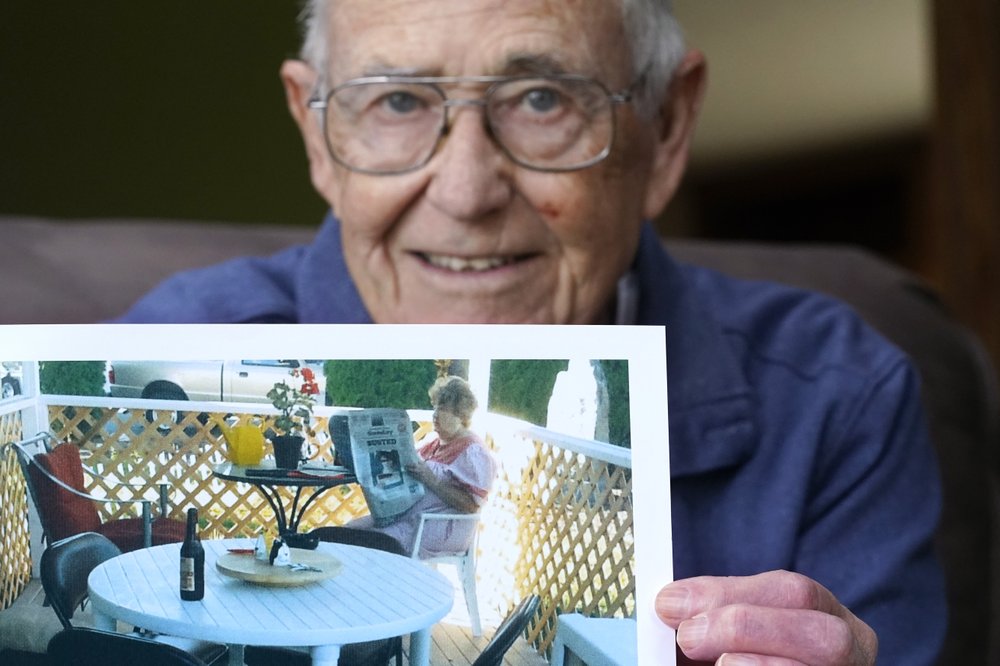 Victor Hamilton displays a photo of his late wife, Nancy “Nicki” Hamilton, who died about a year earlier after contracting COVID-19 at a choir practice, Thursday, April 8, 2021, at his home in Mount Vernon, Wash. The choir practice in sickened 53 people and killed two, becoming one of the first known COVID-19 superspreader events in the United States. CREDIT: Elaine Thompson/AP

In nearby Mount Vernon, family and friends stream into Radius Church, gazing at an installation of a few dozen photos of Carole that the siblings put together. Wendy also displays a quilt her daughter made using Carole’s music camp T-shirts.

Pastor Ken Hubbard tells attendees the service isn’t really a funeral, but a memorial, a chance to share stories about Carole.

“I’m pretty sure her prayers saved my life a time or two,” grandson David Woodmansee says.

Loved ones recall Carole’s devotion to her family, faith and music. Others remember how she welcomed them into her family, gave piano lessons and did volunteer work for her church.

They sing “Blessed Assurance,” her favorite hymn. Its lyrics were among her last words to her children from the hospital.

After the service, the family returns to the cemetery to lay flowers. They sing again too, closing the day with a spontaneous, smile-filled rendition of “Happy Birthday.”

Later, Wendy reflects on the choir practice where her mother contracted the virus, noting the knowledge gained from it that helped advance preventative measures.

“I think my mom would be willing to give up her life in order to save lives,” Bonnie said. “That was the kind of person she was.”