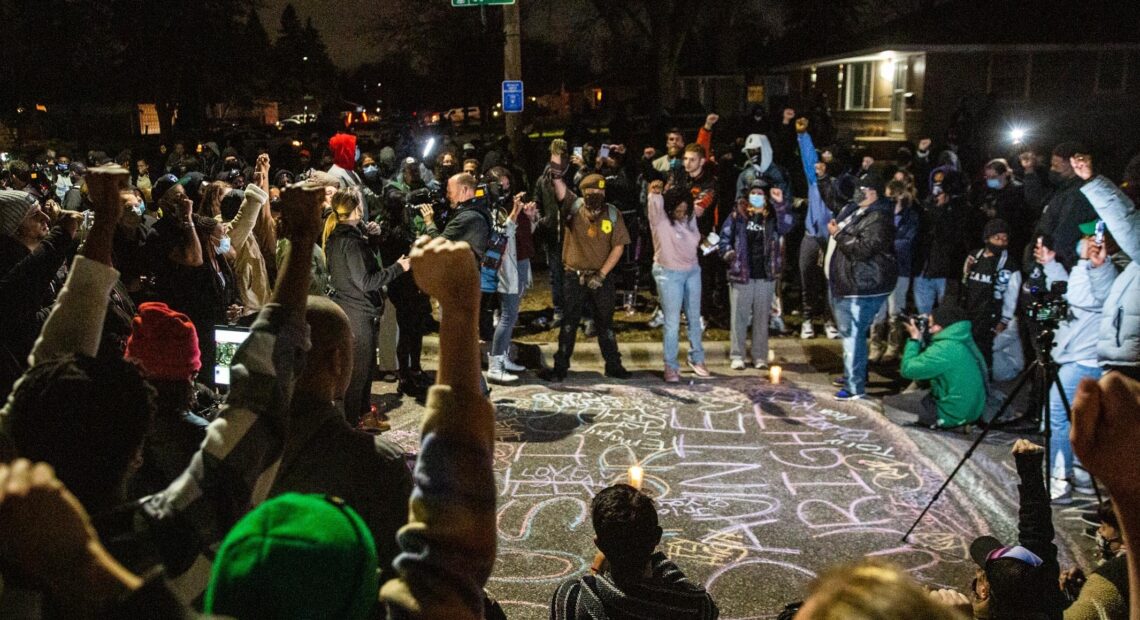 Officials in Brooklyn Center, Minn., called the death of Daunte Wright, a 20-year-old Black man, the result of an “accidental discharge” of a gun by a police officer.

“It is my belief that the officer had the intention to deploy their Taser but instead shot Mr. Wright with a single bullet,” Gannon said. “This appears to me, from what I’ve viewed and the officer’s reaction and distress immediately after, that this was an accidental discharge that resulted in the tragic death of Mr. Wright.” 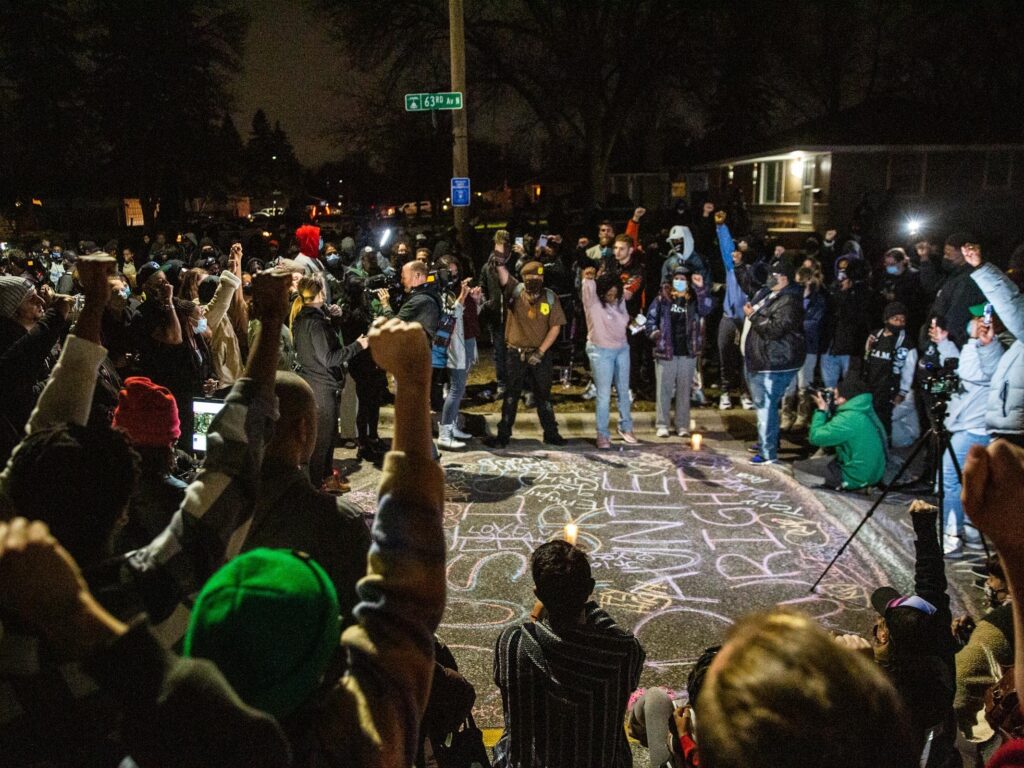 Mayor Mike Elliott announced Monday afternoon that the City Council had given him direct control over police operations. Later Elliott said he had relieved the city manager of his duties and assigned them to the deputy mayor.

The fatal encounter began just before 2 p.m. local time Sunday when Brooklyn Center police pulled over Wright after noticing his car had expired tags, Gannon said. (Wright’s girlfriend was in the passenger seat, according to his mother.) When police discovered he had an outstanding arrest warrant, he said, the officers attempted arrest. (Police did not immediately have details about what the warrant was for.)

The video clip shown Monday began as the officer wearing the camera arrived on the scene of the traffic stop already underway. The video shows another officer speaking to Wright, who exited the white Buick sedan and turned around to be handcuffed. As the other officer began to handcuff him, Wright appeared to pull his hands away and duck back into the car.

As the first officer attempted to restrain Wright, the officer wearing the body camera ran toward the open door and drew her handgun. She yelled, “Taser,” three times, then fired a shot. Immediately afterward, she said, “Holy s***, I just shot him” as the car drove away. The car continued for several blocks before crashing into another vehicle, authorities said.

The Minnesota Bureau of Criminal Apprehension is investigating the shooting. Investigators from the bureau were not present at the Monday press conference; Gannon said the bureau did “not condone” the release of the video and left the decision to him. On his choice to release the video within 24 hours of the shooting, Gannon said: “I felt the community needed to know what happened. They needed to see it. I needed to be transparent. And I want to be forthright, with due respect to Daunte as well.”

The officer who fired the shot has not been named but was described by Gannon as “a very senior officer” and has been placed on administrative leave. Elliott, the mayor, said Monday he supported firing the officer.

“Our hearts are aching right now. We are in pain right now,” said Elliott, who is Black and a Liberian immigrant. He said the shooting “couldn’t have happened at a worse time” as the eyes of America were already watching the Minneapolis area; the trial of Derek Chauvin, the former police officer charged with murder and manslaughter in George Floyd’s death, is proceeding 10 miles away in downtown Minneapolis.

“So to have a police shooting involved in our community and killing a young man is heartbreaking and unfathomable,” he said, his voice breaking. “Let me be clear: We will get to the bottom of this; we will do all that is within our power to make sure that justice is done for Daunte Wright.” 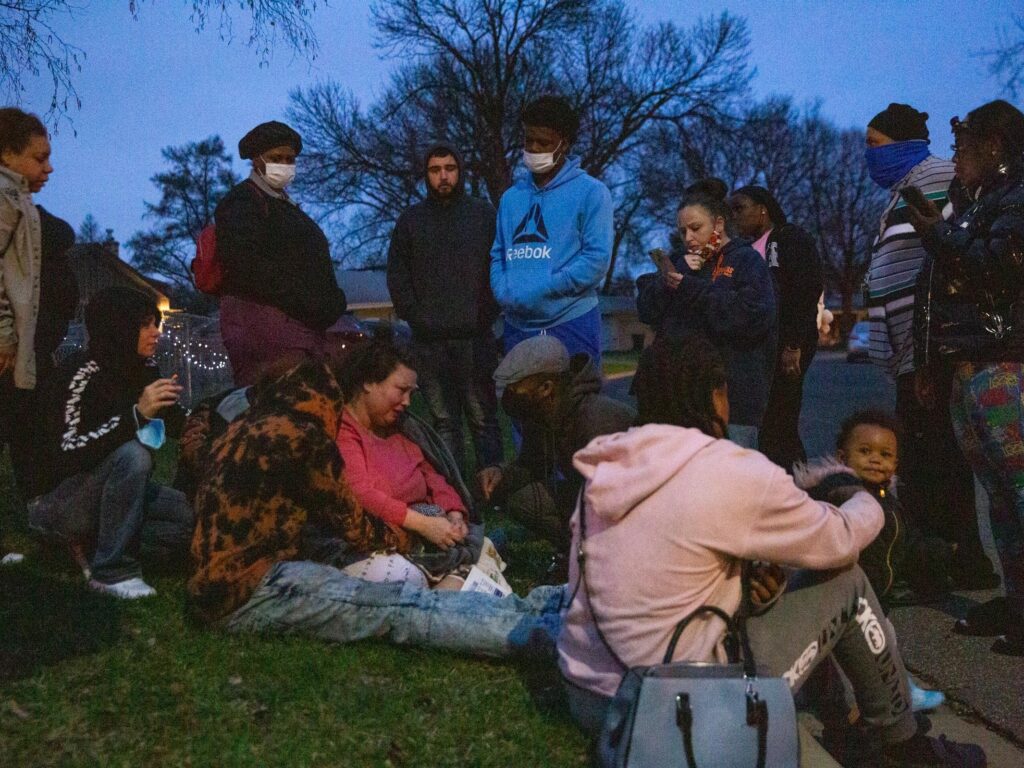 Daunte Wright’s mother, Katie Wright, is surrounded by family and neighbors near the site in Brooklyn Center where a police officer shot and killed her son during a traffic stop.
CREDIT: Evan Frost/MPR News

In a video posted to Twitter by a reporter with local TV news station KARE, Wright’s mother, Katie Wright, said she was on the phone with her son during the police stop. After sounds of a scuffle and a voice ordering Daunte Wright to put the phone down, she said the call disconnected. When she called back, she said, his girlfriend answered and said Daunte had been shot.

Katie Wright told Minnesota Public Radio that her son had been taking his new car to get it washed before he was pulled over.

By the time Bureau of Criminal Apprehension investigators arrived on the scene following the crash, a crowd of roughly 100 people had gathered, according to officials.

Over the course of the afternoon and evening, the crowds grew and shifted to the Brooklyn Center Police Department, where the protests lasted well into the night. Shortly before midnight, police declared an unlawful assembly and dispersed the crowd with tear gas and flash-bang grenades, according to Minnesota Public Radio; by the end of the protest, two people were arrested.

“It was terrifying how fast there was that many police officers armed to the teeth who could respond that quickly,” said Matthew Branch, a Brooklyn Center resident who attended Sunday’s protests. “They were aggressive, they were intimidating, they were agitating the crowd, and you could feel the energy change when they left the vicinity.”

At least 20 businesses were targeted, officials said, including Walmart, Foot Locker and Icon Beauty Supply. There was also scattered looting in other parts of Minneapolis.

In a press conference Monday afternoon, Minnesota Gov. Tim Walz, a Democrat, called on the state Legislature to take up more substantive police reform legislation than a compromise bill passed in last summer’s special session, which some liberals criticized then as not transformational enough.

“We can either come together and fix this, or we can suffer together as fools,” he said.

The mayors of Minneapolis and St. Paul both declared states of emergency and ordered curfews beginning at 7 p.m. Monday.

“We have to ask ourselves why and how does this keep happening over and over and over again in America, in the world, in Minnesota?” said St. Paul Mayor Melvin Carter, evoking the names of Philando Castile and George Floyd, two other Black men killed by police in the Twin Cities area.

Authorities said Monday the events in Brooklyn Center would increase the need for law enforcement across the Minneapolis area, where agencies were already on high alert due to the ongoing Chauvin trial. Closing arguments are expected next week.

The Minnesota National Guard announced Monday they would deploy even more members than the 500 currently stationed across the Twin Cities.

“You will see a robust assortment of National Guard, state and local police departments working together over the next two or three days as we once again prepare for the trial, and also are prepared for any further civil unrest that may come from the Brooklyn Center officer-involved shooting,” Minnesota Department of Public Safety Commissioner John Harrington said at a press conference Monday morning.

Officers and Guardsmen remained deployed outside the Brooklyn Center Police Department and at the Shingle Creek Crossing shopping center, where business owners and employees turned out Monday morning to see the damage and begin cleaning up.

“Finally, finally,” said Tony Hardy, who was sweeping up broken glass at the damaged shopping center as the Guardsmen set up nearby. “Walz finally pulled the trigger — a little too late, again, but they’re here, at least.”

In Chauvin’s trial, the judge denied a motion Monday from the defense to sequester the jury immediately due to Sunday’s protests and looting.

Defense attorney Eric Nelson noted that one juror lives in Brooklyn Center and others have “connections” to the area, and he argued that Sunday’s unrest following a police shooting there could make them less willing to acquit Chauvin.

“The emotional response that that case creates sets the stage for a jury to say, ‘I’m not going to vote not guilty because I’m concerned about the outcome,’ ” Nelson said.

In denying the motion, Hennepin County Judge Peter Cahill replied, “That’s a separate issue, and [the jury] should treat it as such. It would be a different story if it was civil unrest following a different verdict.”