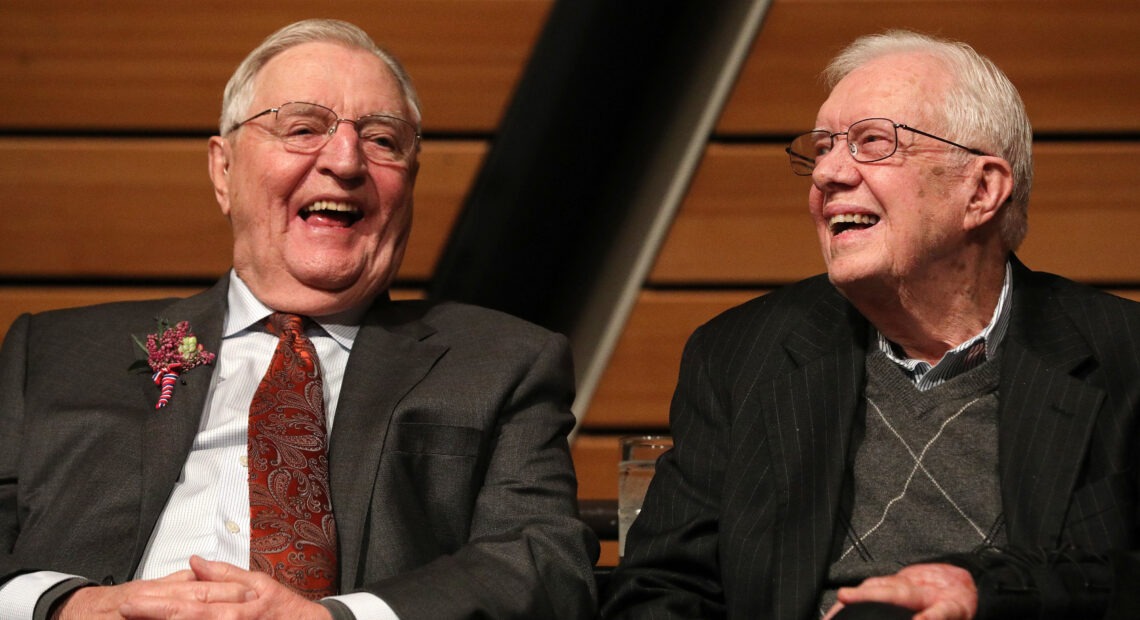 Mondale, who was known to his friends as “Fritz,” endured a landslide loss when he challenged incumbent President Ronald Reagan in 1984. But his most lasting mark may be left on the vice presidency, an office with little stature until Mondale redefined it while serving as former President Jimmy Carter’s influential number two.

He added, “Fritz Mondale provided us all with a model for public service and private behavior.” 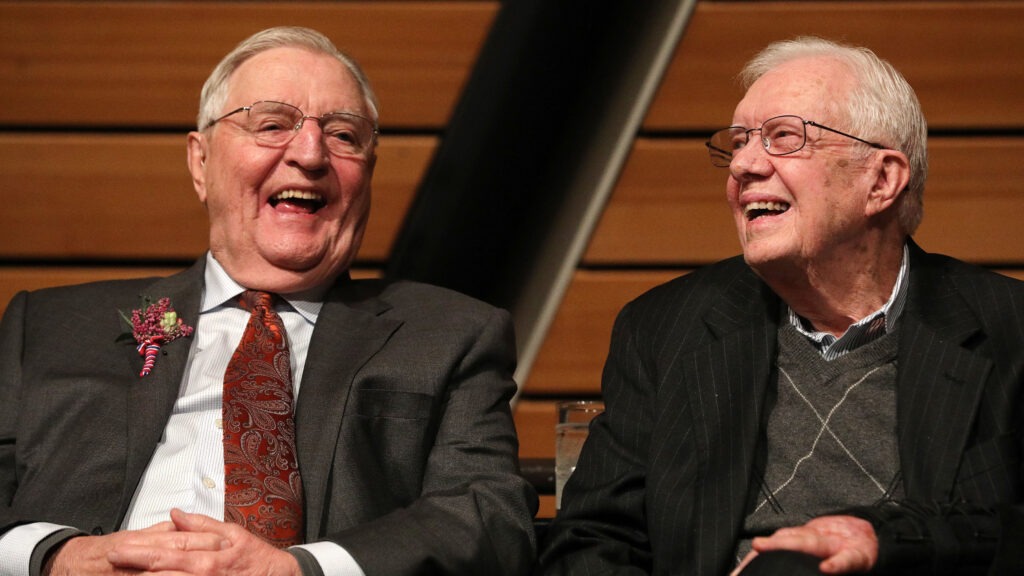 Vice President Harris praised her predecessor in the office as bringing “the President and the Vice President closer together, re-defining the relationship as a true partnership. Vice President Mondale worked side by side with President Carter as the two endeavored to end the arms race, promote human rights, and establish peace.”

She said, “His legacy will live on in all of us.”

Mondale was a product of low-key Middle America. He grew up during the Great Depression in a series of small, struggling towns in southern Minnesota’s farm country and was the son of a Norwegian American Methodist preacher.

In a 1984 campaign biography, Mondale recalled his high school years, saying he was captain of the football team during his senior year. “It was a matter of pride,” he said about the position. “And we played very hard and we had a fair record.” He added that his teammates called him Crazy Legs.

He also recalled his parents teaching him he could be whatever he wanted to be as long as he was honest and worked for it. In 1960, at the age of 32, he was elected as Minnesota’s attorney general. When his political mentor Hubert Humphrey left the U.S. Senate to serve as Lyndon Johnson’s vice president four years later, Mondale got appointed to Humphrey’s seat.

“In each position that he had, he did a hell of a good job,” Mike Berman, a top aide to Mondale in the Senate, later told NPR.

Berman said Mondale’s being chosen to serve there and later in other posts was not just good luck. He said leaders looking to appoint someone to an open position felt Mondale was someone “who they felt … they could rely on to do well in the position, but more importantly, would do well in the politics of whatever the next election was.”

While Mondale may not have been an exciting figure in Washington, friends and political scientists alike described him as “squeaky clean,” “decent,” “funny” and a “political giant.”

“When we look at people who made a mark through public service in the 20th century, Fritz Mondale is gonna be right up there in the hall of fame,” Norm Ornstein, a resident scholar with the American Enterprise Institute, a right-leaning conservative think-tank, told NPR.

In 1976, former Georgia Gov. Jimmy Carter chose Mondale for his presidential campaign running mate. According to Al Eisele, a Minnesota reporter who covered Mondale’s 12 years in the Senate, Mondale brought a dose of socially progressive politics to that ticket and “he was… one of the leading spokesmen of the liberal wing of the party as a senator.”

At that year’s Democratic convention, Mondale portrayed joining forces with Carter as ending the Democrats’ geographical and political divisions.

“We stand together as a nation, reunited at long last, North and South, Georgia and Minnesota,” he said to applause.

But behind the scenes, Mondale was determined not to repeat Hubert Humphrey’s unhappy experience as an all-but-ignored vice president. He made it clear to Carter that he had no intention of becoming an extraneous accessory.

Eisele, who became Mondale’s press secretary and traveled with him for the two candidates’ first meeting at Carter’s home in Plains, Ga., told NPR, Mondale didn’t want to be a “piece of standby equipment, which vice presidents up to that time had been.”

Goldstein, a scholar of the vice presidency, said Mondale demanded and got full access to both information and the president himself, as well as an office in the West Wing.

“He created a new job definition for the vice presidency of a principal across the board advisor for the president and a troubleshooter for things that had to be handled at the highest level that the president couldn’t handle,” Goldstein said.

Four years after Reagan thwarted Carter’s reelection, Mondale challenged Reagan’s bid for another term. First, though, he had to win his party’s nomination, and that meant getting past a rising star, Colorado Sen. Gary Hart. At a primary debate, Mondale turned the tables on Hart with a single, memorable line:

“When I hear your new ideas, I’m reminded of that ad, where’s the beef?” Mondale said to laughter.

In a speech 20 years later, Mondale said an aide had pressed him to use that line, lifted from an ad for Wendy’s hamburgers.

“I had given about 20 serious speeches and nobody, including my wife, remembered a word of them,” he joked. “But after that, wherever I went around the country, ‘Where’s the beef?’ ” he said people would call out.

But at that year’s Democratic convention, after choosing New York Rep. Geraldine Ferraro as the nation’s first female running mate, Mondale delivered a line that caused even some allies to cringe.

Mondale’s candor went unrewarded. He was well behind in the polls when ABC’s Peter Jennings opened the first televised debate between the two candidates. A sure-footed Mondale went after Reagan in that debate, and initially it seemed as if the debate could become a game changer for Mondale.

“You could actually see a chance that if Reagan couldn’t pull his act together a little bit better, we might have a real contest on our hands,” Ornstein recalled.

But Reagan did pull it together by the second debate, and Reagan unleashed an artful zinger against Mondale, saying, “I will not make age an issue of this campaign. I am not going to exploit for political purposes my opponent’s youth and inexperience.” The audience laughed.

Reagan went on to trounce Mondale, beating him in 49 states. The only state Mondale carried was Minnesota.

Two decades later, at the Dole Institute of Politics, Mondale ruefully reflected on that race.

“I knew my chances of winning were not very good. That anybody [who] wants to run against Reagan ought to go see his doctor, you know, because he had some kind of touch I can’t explain.’

He described going to see Jesse Unruh, who had run against Reagan during his bid for California governor.

Mondale remembered asking, “What do you recommend?”

Berman recalled Mondale’s primary objective for the 1984 campaign was to win in Minnesota.

That would come later, after Mondale served three years as President Bill Clinton’s ambassador to Japan. It happened unexpectedly in 2002, when Mondale was pressed by his party to run for Paul Wellstone’s Senate seat after Wellstone was killed in a plane crash 10 days before the election. Republican challenger Norm Coleman won.

Ornstein later attributed Mondale’s loss mainly to a voter backlash caused by political remarks from others at Wellstone’s memorial service and said the defeat was a difficult blow for Mondale.

But those who knew Mondale say he seemed to care more about how he’d campaigned than what the final result was.

Mondale wrote a political memoir in 2010. He called it, The Good Fight – A Life in Liberal Politics. Words that could serve as his epitaph, as well.