PULLMAN (Murrow News 8) – Police have a man in custody in connection to a Saturday morning shooting on Pullman’s College Hill.

Late Saturday morning, Pullman Police announced the arrest of George Melvin Harris III, 23, on 2nd degree assault, connected to a shooting which killed one and injured another. Police have said at least one of the two victims is a WSU student. Police are still trying to notify family before releasing names.

Police responded to the call at about 12:30 a.m. Saturday to the 1200 block of NE Myrtle Street for a report of a loud party in the area. As police approached the party, they reported hearing gunshots.

Police found two males who had a number of gunshot wounds. First responders with the Pullman Fire Department took both to Pullman Regional Hospital, where one died shortly after. The other went via Lifeflight to a hospital in Spokane.

In a Saturday morning press release, police said it appears to be an isolated incident and they do not believe this is an active shooter situation.

When Nick Rolovich was relieved of his duties as head football coach on Monday, it inspired strong reactions from across the WSU community and the… Continue Reading Cougar Athletic Fund Donors Lift Up Student Athletes 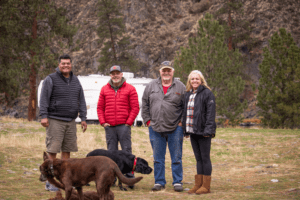 A Trip To The Salmon River With A Local Fisherman: Steelhead Trout Declining In Idaho