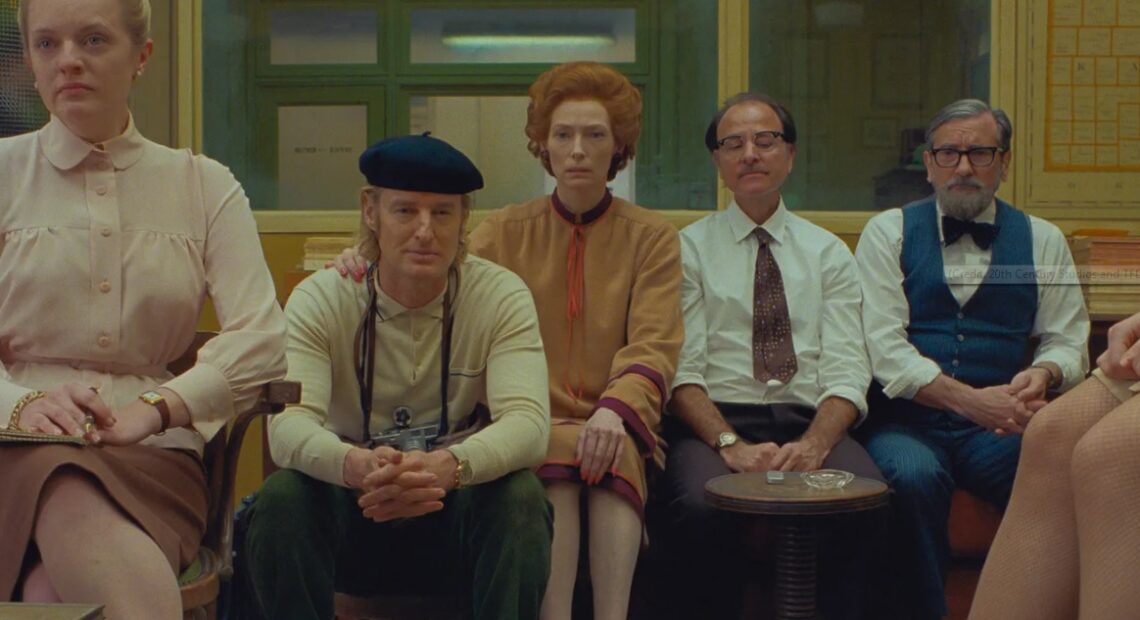 Make no mistake. Writer-director Wes Anderson’s newest flight of fancy is an unabashed conceit, filled with homages, tangents and inside jokes that defy counting. This is also, unmistakably, a labor of love and a joy to behold. Appropriately, it takes place in the magical twentieth-century town of Ennui-sur-Blasé. (Anderson actually made the picture in Angoulême, France, the city known as the “capital of the comic strip.”)

At its core, The French Dispatch reflects Anderson’s high regard for The New Yorker magazine, a publication he discovered in high school. The short stories, in particular, caught his imagination–“stories that no one had ever quite heard before.” The legendary Harold Ross, a co-founder of the publication nearly a century ago, had lingered in France after the First World War to gain experience as a print editor. He and his successor, William Shawn, became the inspiration for Arthur Howitzer, Jr., the no-nonsense founding editor of The French Dispatch (played by Bill Murray, an Anderson regular, in their ninth collaboration). He strictly enforces a “no crying” rule for his eclectic staff. 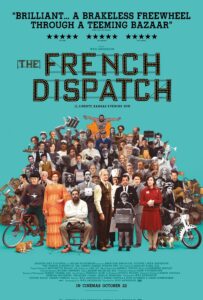 The film basically plays out in a prologue, three stories and an epilogue. The first involves an incarcerated artist, Moses Rosenthaler (Benicio Del Toro), with Léa Seydoux (the love interest in the latest James Bond picture, No Time To Die) serving as both his guard and his muse. Adrien Brody contributes amusing histrionics as art dealer Julien Cadazio.

The second takes us to the streets, where Zeffirelli B (Timothée Chalamet, now in Dune) and Juliette (Lyna Khoudri) lead opposition student movements, with Frances McDormand as Lucinda Krementz, an American journalist both covering and refereeing their activities. (She channels Mavis Gallant, the celebrated writer who chronicled the historical Paris uprising of 1968.)

The last and most complex story focuses on the Police Commissioner (Mathieu Amalric), a widower and dedicated gourmand whose young son has been kidnapped. Jeffrey Wright portrays Roebuck Wright, a food and social critic with a faultless memory, and Stephen Park plays Lieutenant Nescaffier, an esteemed chef who specializes in “police cooking.” Anjelica Huston as the narrator and Tilda Swinton as a lecturer and “art talker” provide continuity.

The A-list cast of American and European actors, all buying into Anderson’s stylized sensibility, is huge. It includes Elisabeth Moss, Saoirse Ronan, Cécile de France, Christoph Waltz, Owen Wilson, Willem Dafoe, Edward Norton, Liev Schreiber and Henry Winkler. Hint: not every one of them has dialogue.

As for the look and tone of the movie, it’s decidedly tongue-in-cheek, Wes Anderson-style. Dialogue veers into comical, ironic or melancholy non sequiturs. Scenelets meld into each other, often by means of a pratfall or other visual humor, elaborate tracking shots or characters who simply invade the frame. The cinematography alternates among carefully calibrated black-and-white, color and animation. Since all of the characters harken back to famous New Yorker writers or profile subjects, the entire film has a nostalgic quality to it.

The richness of The French Dispatch also lies in its wealth of homages to other directors and films. There are too many to mention here, but you can start with Renoir, Truffaut, Godard and Tati on the French side, along with Hawks, Wilder, Coppola and Visconti. If you’re a student of movie history, you can smile at all of the nods in their direction; if not, you can still appreciate the audacity of style and command of cinematic grammar in Anderson’s work.

The French composer Alexandre Desplat, who won an Academy Award for scoring Anderson’s The Grand Budapest Hotel, wrote the pitch-perfect original music here, with the acclaimed pianist Jean-Yves Thibaudet among the performers. You’ll also hear snippets of Bach, Chopin and the late Ennio Morricone on the soundtrack.

Let’s face it. Wes Anderson knows whimsy. His catalogue of memorable eccentricities to date includes Rushmore, The Royal Tenenbaums, The Darjeeling Limited, Moonrise Kingdom and Isle of Dogs. In The French Dispatch, he delivers yet another complex, highly entertaining movie in his trademark, sinuous style. With the fictional magazine of the title based in a specific Kansas town, the movie fully adheres to its motto: “From Liberty to Ennui.”