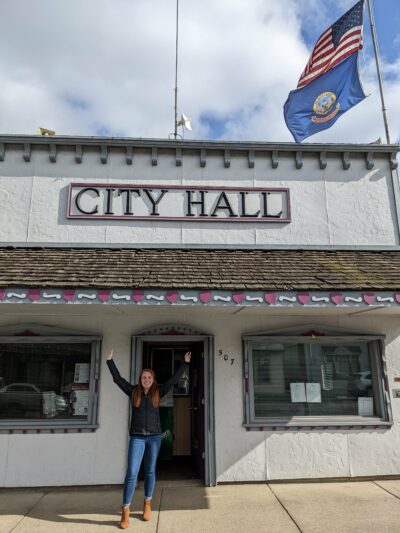 KAMIAH, ID  – As lockers slam and students move through the hallway, I make my way to the Kamiah High School library to meet with Kamiah City Council member Kaylee Hunt. She’s 18 years old, and still in high school.

“I never really considered city council just because I’m 18. So it seemed a little, unrealistic, in a way,” said Kaylee.

It’s her senior year, and Kaylee takes all her classes online. But she comes to campus to meet with her advisors and check on scholarship applications on days like today.

Next, we head downtown to Kamiah’s City Hall to talk with Mayor Betty Heater. She said she worked for over a year to find another person for the city council. She approached five different citizens about taking the spot.

The mayor initially approached Kaylee’s mom for the position, but she declined due to her busy work schedule.

Kaylee says she was surprised when her name came up during a phone call. “At first I kind of thought like, oh, they’re not being serious, you know?”

The Kamiah City Council has meetings twice a month to go over the city budget and bills, “things that are broken or things that need fixed, or ordinances, or people coming in with an agenda request that maybe has a problem,” says Heater.

Heater told Kaylee to come to a meeting. And then, she went to another meeting. Kamiah Mayor Betty Heater officially appointed Kaylee to the Kamiah City Council, and she was sworn in on January 26 of this year.

So far, Kaylee says she is enjoying it, and Mayor Heater says the council is ecstatic to have her.

“Even with a little bit of hesitation she’s had, she dove right in, she’s getting educated, and she makes good, sound decisions,” says Heater.

Kaylee says she is excited about upcoming city council projects, like a program to help residents clean up their yards.

“It’s called Operation Fresh start,” Kaylee says. “The idea behind it is to kind of like, help get some of the areas in our community cleaned up.”

Kaylee will graduate this spring, not just with a high school diploma, but also an associate’s degree. Going to school online during the pandemic allowed her to take dual credit classes to get ahead.

Her plan is to go to college online, and finish her bachelor’s degree while living in Kamiah. This way, she can finish serving out her two year term, and stay involved in the community.

For other high schoolers thinking about joining their city councils, Kaylee said to ask questions, and be open to learning about the process.

Above all, “Don’t let self doubt ruin it for you,” she said. “Don’t doubt yourself.”

Kaylee plans on going to law school in the future. For now, she’s working on her own fresh start.