Main Gallery Opening – Jan Cook Mack: This is Where I Live 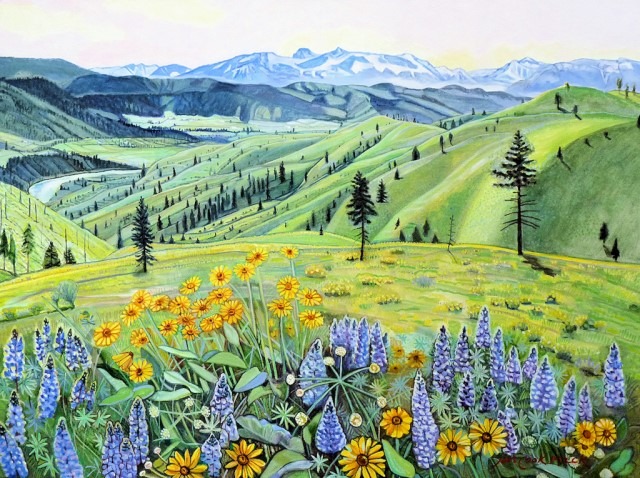 Jan Cook Mack grew up in the United States and Taiwan and received her Fine Arts degree from Bennington College in Vermont. She established herself as a fine artist in New York City before moving to Eastern Washington State in 1986. Mack’s paintings arise out of an emotional response to the pursuit of an intimate relationship with the natural world. Mack’s move from Vermont to Washington expanded her pastoral views to include explosive wildscape vistas. “Painting onsite allows the energy of a place to fully enter the artwork and give a voice to invisible forces,” she says. “I seek high elevation painting sites to depict a bird’s-eye view of the dynamic geology spread out below.” Her studies in Taiwan of Chinese hand-scroll painting have also influenced her panoramic vision of the West. She has painted official portraits of Vermont’s Governor Madeleine Kunin, Senator Arthur Gibb, and two federal judges.