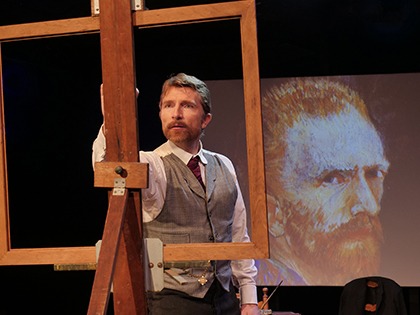 “Vincent” is a one-man play written by Leonard Nimoy (“Star Trek”) and stars Jean-Michel Richaud, who has performed this show for more than five years on an international tour spanning three continents. The play is set just after the death of little-known painter Vincent Van Gogh, while rumors are flying in Paris. Some say he was a penniless madman, a frequenter of prostitutes and soon to be forgotten artist of trifling quality. Others denounce him as a wayward priest and a foreigner. Many whisper that he took his own life in a moment of insanity. His brother Theo (Richaud), Vincent’s confidante and lifelong supporter, takes the stage in a rented lecture hall to set the record straight.

Vincent opened in Los Angeles in 2012, where it enjoyed a 14-week sold out run, moved to San Diego for a sold out run in 2013, and then began touring the United States, including many more sold out engagements. In 2015, the play had its French-language premiere in Paris, France, where it was nominated for Best Actor and Best Author awards at the Petits Molieres – the French equivalent of the Tony Awards for small theatres. Vincent has been touring internationally in English and French ever since.

Throughout the play more than a hundred of Van Gogh’s paintings are projected on a framed screen, providing a rich overview of the artist’s work and visual complement to the story.

Please review our current health and safety precautions, including required mask use. Ticket holders will receive an email during the week before the show with any updates.