PULLMAN – Last week, the ASWSU Senate met to send a recycling initiative called known as the “bottle bill” to the Washington State Legislature. This container-bottle legislation requires a customer to pay a deposit when they purchase a beverage in a recyclable bottle/can. Once finished, the customer can bring the bottle/can back to a recycling facility that will refund their deposit. Ten states, including Oregon and California, take part in this container-deposit program.

The goal of the resolution is to incentivize recycling. The refund paid to those who recycle ranges from five to ten cents per can depending on the state. ASWSU thinks that if the state were to enact the bottle bill at the state level that recycling at WSU and in Pullman would improve.

Chase Urquhart, an ASWSU all-campus senator, thinks many college students don’t have a motivation to recycle and is a big reason why he supports incentivizing recycling so that students feel there is something in it for them.

Urquhart said many students want to help out and recycle, but the vast majority do not take the time to read the labels on what can and can’t be recycled. 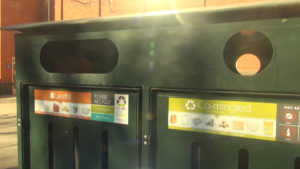 “A lot of people go through this practice of wishful recycling that’s basically the idea that they think something is recyclable and will throw it in with the co-mingled recycling bins when it really isn’t, but what that’s doing is contaminating the recyclable materials so it’s really just causing more problems,” Urquhart said.

Another ASWSU all-campus senator, Grant Esomonu, said he was happy to see ASWSU support an environmental initiative because of environmental issues being a hot-button topic.

“Being able to come out and support an initiative of this size is just kind of spectacular and I’m really happy that we got the support that we did,” Esomonu said.

Kiera Rust, an ASWSU senator for the Voiland College of Engineering and Architecture, said that the senators put in a lot of research towards proposing the resolution.

“When we were doing our research, we really wanted to do something local, and we started to realize that the impacts of recycling is really a global issue, and we started to understand that we’re going to have to tackle this top-down,” Rust said.

The ASWSU resolution has been sent to the Washington State Legislature for review as of last week.