Dale Harrison spent his career dedicated to public broadcasting, working at NWPB in Pullman, Washington and at KSKO in McGrath, Alaska. By his retirement, Dale was a well-versed radio show host, producer, reporter, news director and IT technician. He worked at NWPB from 1977-1981 as a producer of the morning radio shows Morning Edition and Daybreak and as News Director at the station from 1988-2000.

"I talked pretty on the radio."

Dale discusses the sequence of events that led him to a career in public broadcasting. As the son of the WSU radio-television giant Burt Harrison, one might think Dale was merely following in his father’s footsteps; however, Dale’s life in radio was one born of chance rather than intention. In this interview with Producer Ash Beard, Dale gets real about his time as a student at the station, working on-air and getting fired multiple times for partying too hard.

[Ash] I’m just curious if, growing up with Burt Harrison being your dad, if you ever felt pressure to go into radio, or if you wanted to do it? 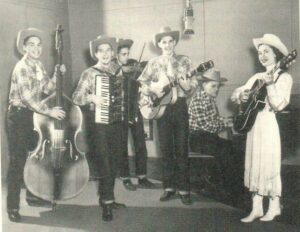 [Dale] Neither. I don’t think it ever occurred to him that I’d work in radio. My appreciation of my old man was as a piano player, not so much a radio guy. He played in a bunch of different dance bands, and would drive all over the Northwest with my mother and play in bands, and when I was wandering around, trying to figure out what I was going to do in college, I came up and took an audition and was horrible, just absolutely horrible.

[Dale] Yeah. It was here. I went to through the comm school. Well, I didn’t graduate out of communications, because I couldn’t be bothered to go to some of the classes. So, I got one of the first general studies degrees they offered. I auditioned, worked for a year on KUGR, an old student station and then eventually, by the time I was a junior and senior, a friend of mine named Paul McCormick, we were the morning guys. We did Coffee Pot Parade in Morning Almanac and then World of Music and concert favorites. And then we got into the noon hour routine. Anyway, so it turned out I had a knack for it, and I talked pretty on the radio and-

[Dale] … And then when I graduated… Let’s see. It was 1969. So, I was facing the draft, and I had to find a job, and I didn’t get back into broadcasting until I came back here to work in 1977 and then things were changing.

[Ash] When did your dad leave the station?

[Dale] Yes. And when I was a student, he took a year sabbatical to Chiang Mai Thailand, and a guy named Hugh Rundell had to assume his duties, and he was the guy who had to fire me several times when I neglected to come to work because I’d been partying too hard.

[Ash] No way. And then, so when you were hired here, what position did they hire you back as?

[Dale] So, I was hired as a producer, and they were right in the middle of producing this Daybreak program, and it carried on until Morning Edition showed up. Then there was no room for it. When Morning Edition came along, all of a sudden, you had the best broadcasters in the entire world coming on the air at six o’clock in the morning, and you’re competing with students who’ve been on the air for a couple months, a couple weeks. And so the quality of the journalism, the quality of announcing, the quality of the writing, there was just a great big mismatch.

[Dale] One of the entertainments of people who used to listen to the radio station back in the old days in the 50s and 60s and 70s was listening to the new crop of students try and talk about the Touchet Valley and Penawawa and Wawawai  and Sequim, and we had listeners who would call us up to make us aware of whether or not we’d done it.

[Dale] “Nuclear and nuclear,” there was a woman who was on my case virtually every time I made the mistake. The phone would ring, and it was Ms. Smart, so.

"Public radio is the only place left as a resource for good news
and news that isn't immediately beholden to an advertiser."

During his time working as News Director at Northwest Public Broadcasting, Dale witnessed a shift from local reporting to a more regional and national approach to news as the station expanded across the state. In this interview with Ash Beard, Dale highlights why he believes local reporting should always be a priority even though finding the budget to do it well is often a great challenge.

[Ash] And you were news director what year here?

[Ash] Were you the person that was making those decisions of what got to go on air? How local to cover things?

[Dale] Oh, absolutely. And that was changed by events. When I first started, we had one station. And then KRFA came on the air and KFAE in the Tri-Cities, and that had an enormous impact on how you did news. When it was just one local station in Pullman, Washington, no translators, nothing else, we could cover the Pullman City Council, the school board. And we had a flock of students who wanted to do that.

[Dale] We did live broadcasts every year from the Whitman County Fair. You never knew when the mic opened, whether you were going to hear a chicken or a cow. But anyway, so it was an intensely local news presentation.

[Dale] And then when we got this station in the Tri-Cities, and the station in Moscow, then all of a sudden your priorities had to change, because you couldn’t cover all the stuff you’ve been covering in Pullman, and then turn around and cover it in Moscow, and cover it in the Tri-Cities, because you couldn’t come up with enough bodies. And you really couldn’t come up with enough air time.

[Ash] As news director here, how did you go about deciding what was important to fit in that limited air time? 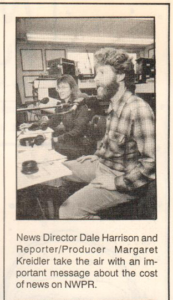 [Dale] So there were lots of things coming into the station and you would say, “Okay, here’s an important national story. How do we regionalize that? How is that story playing out here?” And then a lot of it has to do, can you get somebody where that story is? There was always this push pull with money too.

[Dale] News is incredibly expensive, because you have to hire people. How much travel money do you have? Can you send somebody somewhere for a couple days? Do you have somebody to cover their shift if they’re not there? But it doesn’t diminish how important it is to have the resources to do the local news. No one else is covering it.

[Dale] You used to be able to say, “Well, if we don’t get to the commercial stations will do it. Or the newspapers will do it.” And it wasn’t an excuse, but there were options. And now there are not options. The newspapers are desperately struggling to hire reporters and they’re understaffed. And really the public radio is the only place left as a resource for good news, and news that isn’t immediately beholden to an advertiser.

[Ash] Another thing that I did want to ask you about is just what you think the biggest difference in how the news is delivered, from when you were working in news till now, when you’re an audience member?

[Dale] I think overall the quality of the journalism on the radio now is probably as good as it has ever been.

[Dale] There’s not as much as there used to be. It makes the individual stories stand out a little more. I think it is also much more complicated now because we only had to do radio. We didn’t have to maintain a Twitter feed. We don’t have to maintain a Facebook presence. We don’t have to worry about shooting video, and all of the other ways in which you reach your audience now, that we weren’t burdened with at the time. And I think that makes the job of being a reporter and a news director much more difficult and much more time consuming. And time is something you normally don’t have.

This segment of Daybreak aired live on air, December 28 of 1977. Listen to hear Dale give an agriculture report.