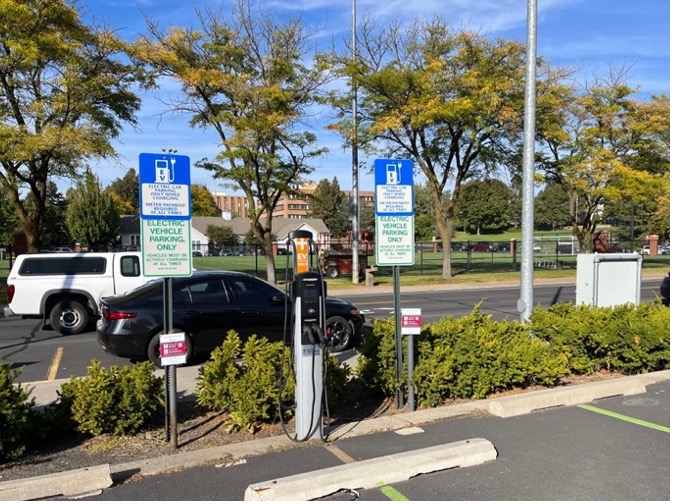 While D’Asia Rayford is busy working on campus, she lets her BMW plug-in hybrid charge at one of Washington State University’s public charging stations.

“I think it’s awesome because it’s free, like you don’t have to pay anything,” said Rayford, who purchased her car about a year ago. “There’s multiple charging stations.”

Each month, anywhere from 40 to 60 electric vehicle drivers plug into one of the university’s four public charging stations. The numbers have grown since the first chargers were installed six years ago, but there are currently no plans to add any more. However, the passing of Washington state’s bill to have all new cars electric by 2030 may change this.

“We started with two chargers, both in the garages,” Chris Boyan, director of WSU Transportation Services. said. “Very, very limited use. I mean there were some months where we had two unique users. Now we’re hitting 40 to 60.”

The university introduced its public charging stations in 2016 at the Smith Center (CUE) parking garage and the Terrell Library parking garage. WSU installed two additional charging stations a few years later that was donated by alumni. One station is on the west side of campus near Dana Hall and the other is on the east side of campus off Grimes Way. Each station has two ports meaning eight vehicles can plug in at once on campus.

In Whitman County, there are 172 registered electric vehicles. According to Boyan, 44 unique users used a WSU-owned charging station in August 2022, some of them out-of-county visitors. During May 2022, 41 unique users used the stations. However, the university was in session for only about half of the time during these months because the semesters were starting or ending.

There is usually an increase in charging usage when football season starts or when students are moving in and out of dorms. Boyan said during September of this year, there were about 60 unique users who charged their vehicles using one of WSU’s charging stations.

“We see on the weekends when we have a football game a spike in electric vehicle usage,” Boyan said.

Rayford regularly charges her car in the Terrell parking garage. However, there have been times where she must find another place to charge on or off campus because Terrell’s chargers are in use.

Before the pandemic, WSU Transportation developed a plan with locations for additional charging stations if they are needed, Boyan said. There are no charging stations near Beasley Coliseum, the Lighty Student Services and French Administration buildings. These are popular parking locations for visitors attending campus events.

“We have sites that we’ve picked out,” Boyan said. “We haven’t done anything as far as estimates. These are just kind of pie-in-the-sky sites.”

However, charging stations are readily available on campus if someone needs to charge, Boyan said.

WSU purchased its charging stations from ChargePoint, one of the largest companies of its kind. Boyan said the installation cost for a dual-head charging station is about $10,000. The infrastructure is also something that must be considered, such as the standards to power the station.

All charges are free when using a WSU public charging station, but drivers must pay the necessary parking fees for the lot where they are charging. However, if more drivers need to charge in the future, the university may start requiring payment from users.

WSU also has private charging stations that provide power for university-owned electric vehicles. Richard Finch, manager of WSU Waste Management and Motor Pool, said they have about 25 electric and hybrid cars on the fleet of vehicles he manages and maintains, but only about seven are fully electric.

“I think over the next few years we will be starting to implement some changes to our fleet and our fleet management, and I think electric vehicles will be a significant part of that,” Finch said.

Finch said they plan to add more electric vehicles, but it is a multi-step process. He thinks his department will be able to use electric vehicles for local and on-campus travel. Finch believes these would be used as the preferred service vehicles when electric vans and pickup trucks become more readily available.

“We are really in the process of planning and we have a lot of things up in the air,” Finch said. “It’s kind of exciting and something I’m spending a lot of time on right now.”