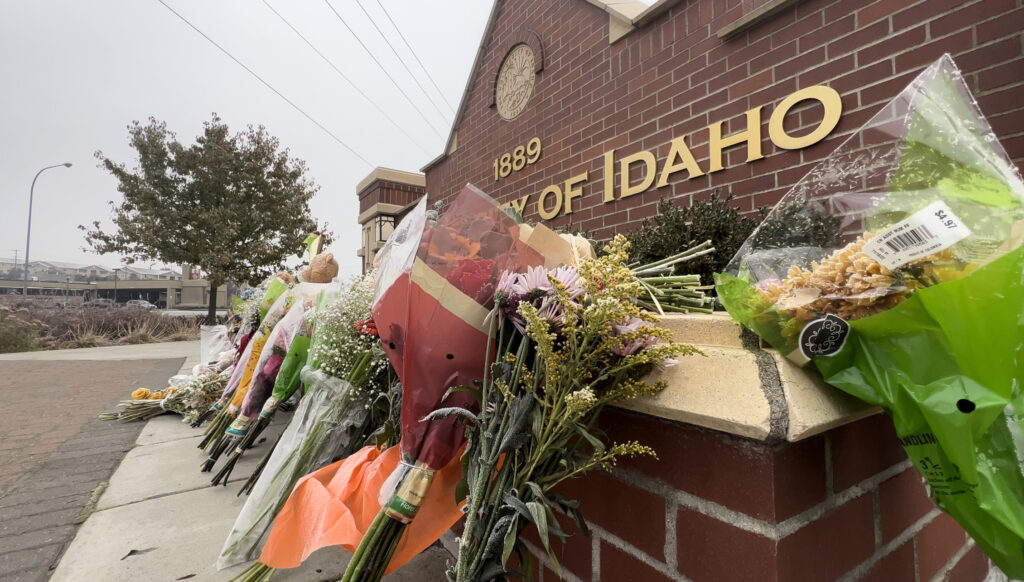 MOSCOW – It sounded like a typical Saturday night for a UI student in Moscow.

Drinks at the Corner Club, a local “everyone knows everyone” college bar, a late night snack at Grub Truck, known for their variety of mac and cheeses, then to King Road, shoulder to shoulder with friends.

“I just remember going to an apartment party there once and looking down over the balcony and seeing the parking lot completely packed with people,” said Alexandra Duggan, a May 2021 graduate of the University of Idaho.

Each house or set of apartments has its own name, even personality, said Duggan.

That’s what makes what happened in the early morning hours of November 15 defy logic. It was all so normal, until it wasn’t.

“I don’t know if the incident that happened on Sunday will impact how many people tend to frequent there,” she said. “It will certainly change things.”

Duggan was back on King Rd. this week for the first time as an alumna. She now reports news for KTVB, the NBC affiliate based out of Boise, one of a number of local and national media descending on Moscow, Idaho following the murder of four University of Idaho students.

Police say someone stabbed and killed Ethan Chapin, Xana Kernodle, Madison Mogen, and Kaylee GonCalves while they were sleeping, some time in the morning of November 13.

More than a week later, police have neither a suspect nor weapon, but they have provided pieces of a timeline.

A timeline that was predictable for a reporter who knows the area.

“My first thought when we figured out that they were out and about that night was to head to the Corner Club,” said Duggan, “because I knew that’s most likely where they were.”

“They turned out to be there.”

The Corner Club is a staple for students at University of Idaho. They come together here, they have fun here… It’s always the place to be. Owner Marc Trivelpiece tells me, “I hurt for the student body. I hurt for their friends and I hurt for the community.” pic.twitter.com/Gx8O0TZbOd

Indeed, Moscow Police Chief James Fry confirmed Mogen and GonCalves spent most of the evening at the Corner Club on North Main St., leaving for a food truck some time after 1 a.m.

Tariq is the editor-in-chief at The Argonaut, the UI student newspaper, watching parts of this timeline unfold at familiar Moscow landmarks. “For our own production nights for our paper, we would go to Grub Truck,” she said.

Mogen and GonCalves were seen on the truck’s popular Twitch stream, a virtual gathering spot for late night hijinx, now a key piece of evidence in their whereabouts.

Ethan and Xana were elsewhere the night of the 12th, as police have said they were at a party at Sigma Chi fraternity, just a couple blocks away from the King Rd. residence.

Police say all four were back at the house by 1:45 a.m., the last time they were known to be alive. Two surviving roommates were already there.

At 11:58 a.m. on Nov. 13, there was a call to 9-1-1 from one of the roommates’ phones. While police haven’t confirmed who made the call, they said Sunday several people spoke to dispatchers, and none, including the roommates, are believed to be involved in the crime.

Police have been hesitant to release many details, citing potential harm to the investigation, but that has allowed conjecture to run rampant. National outlets are spending that time connecting, intentional or not, past crimes in Moscow to this one, from a September knife attack to an October report of a skinned dog.

“I think the most frustrating thing I keep hearing is how could (the surviving roommates) not hear?” said Tariq. “Do you know what someone getting killed in their sleep sounds like? No, you you don’t. You don’t know how their house is set up. You don’t know like how thick the walls may be.”

Perhaps it’s that understanding – of the community and of the student experience – that has compelled the Moscow Police chief to offer the first question to Argonaut reporters in their last two news conferences. Wednesday, he included Washington State University’s Daily Evergreen in that offer.

The Argonaut reporter asked about police presence on campus after Thanksgiving break, whether or not the university intends to bring students back to finish the semester.

A perspective unlikely to receive coverage across the country, and a question potentially stifled as national reporters elbow for answers.

“It does feel kind of good to be acknowledged like that they do see us,” said Tariq. “They do recognize that we’re here and we’re trying to cover this.”

I spoke with students this week on how they have, or haven’t, been processing the deaths of their peers. https://t.co/QC88IcD7uT

In the meantime, social media sleuths have forced police to take time to address rumors about people in the Twitch video, ruling out one man as a suspect. Sunday, and again on Wednesday, they shot down the rumor that the victims were bound and gagged.

In fact, available information has largely revolved around ruling things out, including suspects. Moscow Police Capt. Roger Lanier said Wednesday they are looking into reports that Kaylee had a stalker, though they did not confirm nor refute the validity of the claim. Lanier said they do not believe the following people are involved: The two surviving roommates, the man seen in the Grub Truck Twitch stream, the person who gave them a ride, the people on the 9-1-1 call, or a male Kaylee had called several times throughout the night.

A Moscow Police social media post even had a section titled “Rumor Control” to address misinformation.

“The best thing most people can do to help is stop with any kind of rumors and just seek official information,” Idaho State Police Col. Kedrick Wills said, citing more than 1,000 tips and 150 interviews and pleading for patience in the investigation.

That adds to the frustration for local reporters like Duggan, who said she’s learned a lot about crime reporting this week.

That’s why a Thursday national TV appearance by Latah County Coroner Cathy Mabbutt surprised many local reporters, who had struggled to get information about the autopsies.

Mabbutt appeared on NewsNation, a Nexstar-owned, subscription-based news channel, sharing information she had not released to local reporters either before or after.

“Knowing your intent going in I think is really important,” said Tariq, lamenting morality and ethics in some of the larger scale reporting in this case. “We know what it’s like here. We want it to be portrayed properly.”

At some point, those national outlets will pack up and leave town, perhaps never to return to Moscow.

Duggan, meanwhile, had one more stop Saturday before she left to cover another tragedy in Idaho, a follow-up on missing 6-year-old Fruitland boy Michael Vaughn (find KTVB’s coverage of that case here).

She stopped at the Moscow Rosaeurs grocery store to pick up flowers, which she left at the campus memorial for Ethan, Xana, Maddie, and Kaylee.

“Nothing is easy in this job,” she said, “but you do it because it’s needed. You have an obligation.”