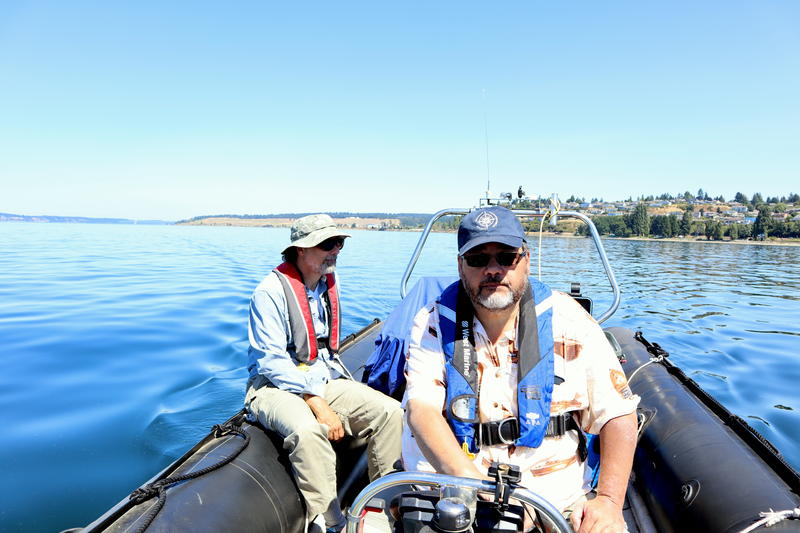 A History Teacher, An Obsession With A Sunken Ship, And The Crew Searching For Its Wreck

Less than 200 years ago, the easiest way to get around a lot of the Pacific Northwest was by canoe. The first American steamship to provide regular service among Puget Sound ports arrived in 1853.

This small steamship, propelled by paddlewheels attached to its sides, was called the Fairy. But its success was short-lived. It soon blew up and sank.

Today, an Oregon-based group of shipwreck hunters wants to find the historic remains of that little steamer. The shipwreck search was inspired by  one man’s obsession. Appropriately enough, he’s nicknamed “Tug.”

Michael “Tug” Buse of Port Townsend, Washington, teaches history and social studies by day. He described himself as captivated by maritime history in his spare time — and by steamboats, in particular.

“I discovered this tiny little side-wheeler,” Buse said. “I just became infatuated with her. So I’ve been researching her now for almost five years.”

The Fairy‘s short life began with the California Gold Rush and ended with an 1857 boiler explosion as she was leaving the Steilacoom wharf for Olympia. In between, the side-wheeler made history.

Beginning in 1853, the roughly 30-foot-long steamer offered the first scheduled service between Olympia (population about 50 to 100) and the brand new settlement of Seattle with intermediate stops in Steilacoom and Alki.  Traces of the historic Steilacoom wharf can still be found today at very low tides.

The explosion on Oct. 22, 1857 injured all on board except the engineer. Luckily, no one lost their life when the diminutive Fairy sank to the bottom of the Sound.

Puget Sound steamers would eventually become so numerous that they resembled a swarm of mosquitos for a time. Those steamers became known as the “Mosquito Fleet” during passenger steamship service that lasted from the 1850s to 1930s.

Buse, the history teacher, credits the Fairy as the Mosquito Fleet’s founding member.

The historical significance of the Fairymade Buse want to find the wreck. It didn’t take much convincing of the right people to help him.

Chris Dewey, president of the group, boarded one of three inflatables launched on a recent Saturday to scan the seafloor just off the Steilacoom shore. It was a sunny, calm day in early August, ideal for towing a torpedo-shaped magnetometer back and forth. The device detects iron or steel on the seafloor.

“We are now looking for the metal parts of that steamer — being the boiler, the engine and probably most of the paddlewheels,” Dewey said.

A second boat team surveyed the bottom with sonar. A third team stood by with an underwater robot video camera (also known as a tethered remotely operated vehicle, or ROV) to investigate promising targets.

The boat crews hailed one another over hand-held radios as they slowly followed search grid tracklines.

“See something, Scott?” crackled the radio. “Nothing too exciting yet,” came the response.

There’s no prospect of gold or silver treasure to motivate the shipwreck hunters in this case. The volunteers included a cartographer, a retired Navy officer, a professional archaeologist, as well as people interested in shipwrecks as a hobby.

“I love the sea so any excuse to have to go to the beach, especially if you’re doing something with purpose instead of just going to hang out,” explained Jennifer Kozik of Portland. “I’m not working in archaeology. It’s more my passion, which I just sort of do on the side.”

The shipwreck would probably be considered a state-owned archaeological site if Kozik and friends find the Fairy where they are looking.

The methodical hours-long search identified three underwater objects that bear further investigation. The deepest is about 90 feet down and the others are at about 60 feet deep. Dewey, of the Maritime Archaeological Society, says a close-up inspection with divers comes next — probably in the fall.

If his team finds the wreck, Dewey’s intention is to thoroughly survey and document it. Still, they would leave the likely-corroded remnants of the ship in place, taking only a possible “diagnostic” artifact that could prove the wreck is the long-lost Fairy.

Dewey’s team has found and documented wrecks in the ocean and along the Columbia River. But the hunt for the Fairy, the team’s first effort in Puget Sound, continues.

———–
To learn more about the Fairy, you can attend a presentation that Michael “Tug” Buse is giving this coming Saturday as part of the “Brigade Encampment” event at Fort Nisqually.

It was a clear day in Tacoma on January 17, 1993. Commencement Bay was crowded with boats. Families gathered on boat decks and across North Tacoma sidewalks to watch the demolition of what was once the tallest smokestack in the world, the ASARCO smokestack that loomed over Tacoma’s waterfront for nearly 100 years.
With the press of a button, a child, supervised by demolition experts, detonated the smokestack. People cheered, bought commemorative sweatshirts and Doug Taylor’s grandfather set off an air horn in celebration, nearly causing his father to topple off their boat. Continue Reading A park from pollution: 30 years after the ASARCO smokestack demolition, Tacoma’s waterfront transforms 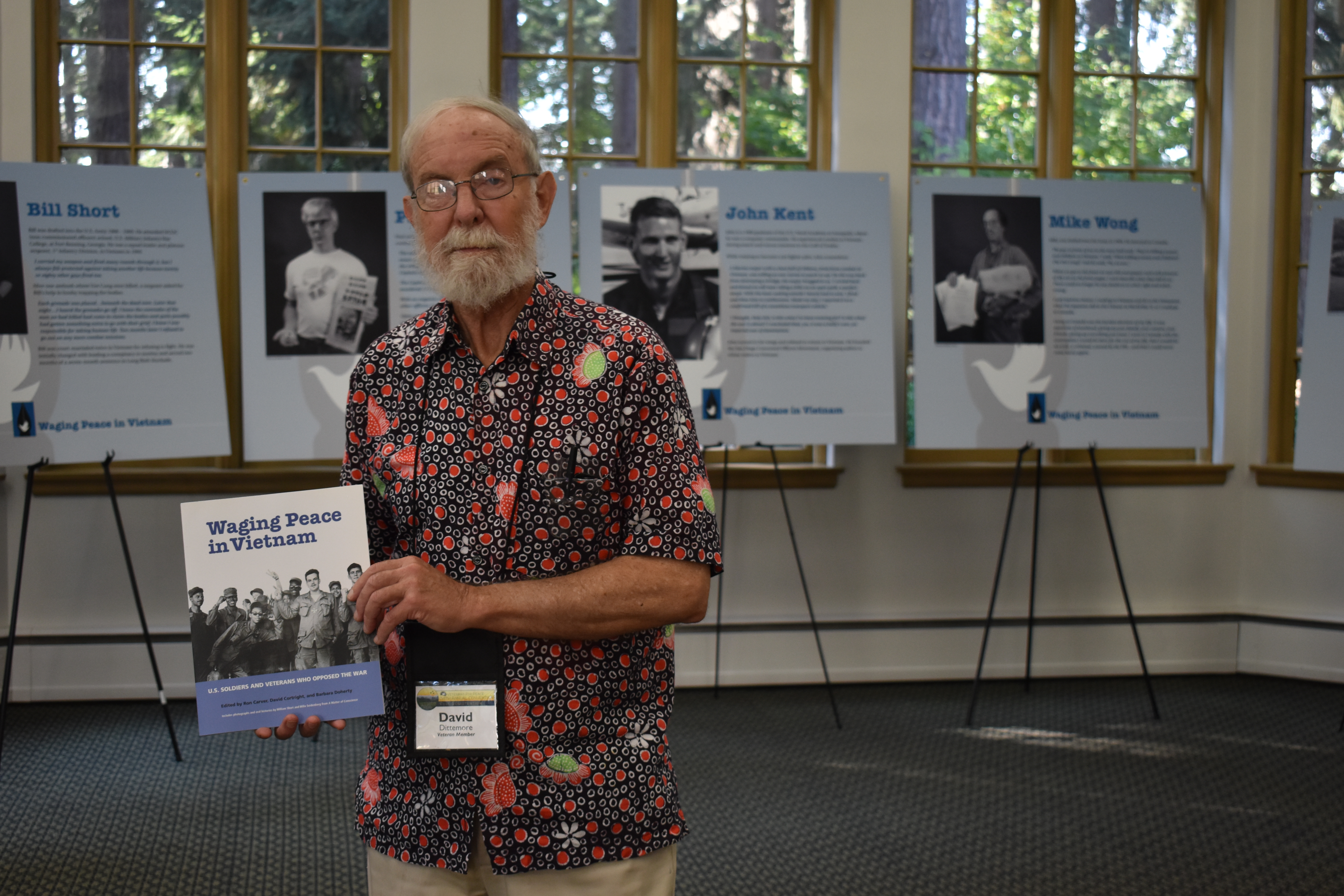 A part of the movement: resistance by GIs during Vietnam era

It wasn’t just civilians who turned to peace in protest of the Vietnam war. Active-duty military personnel and veterans led a resistance from within and outside of the armed forces. The Dissent and Resistance Within the Military exhibit tells some of their stories. Continue Reading A part of the movement: resistance by GIs during Vietnam era The classic black-and-white photos from early decades of the American West often fail to capture the diversity of the people who came here. Chinese migrants helped build the railroads and were big in gold mining. Basque people from Spain became known for sheep herding. The first Filipino cannery workers arrived around the turn of the last century. Now, Oregon archaeologists are on the surprising trail of Japanese families who lived in a now-vanished lumber company town. Continue Reading Archaeologists On Surprising Trail Of Japanese Families Who Lived In Vanished Lumber Company Town