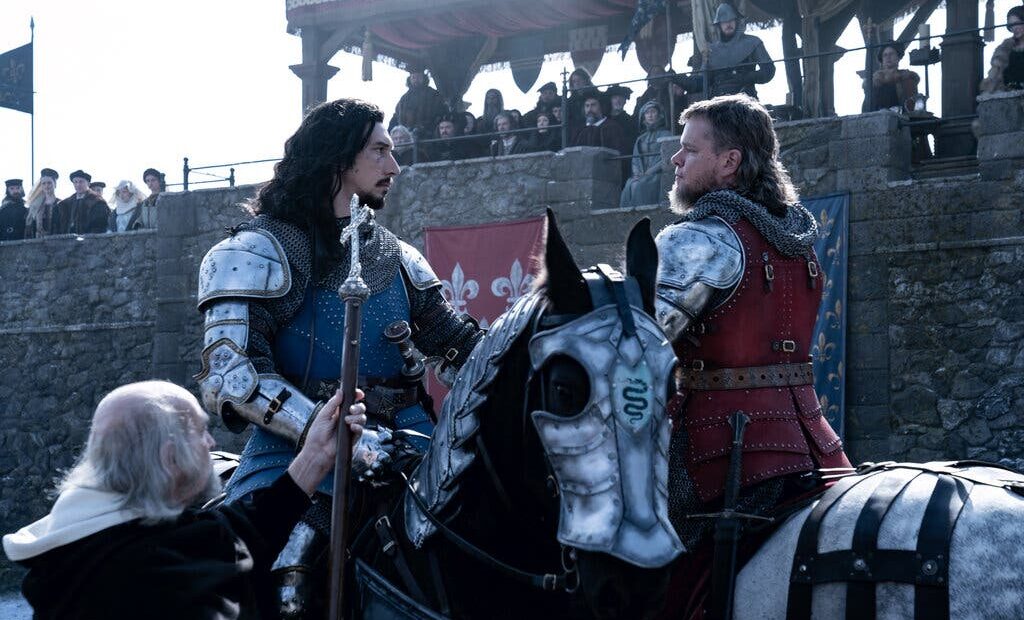 “If we don’t trust each other, this earth might as well be hell.” The words of the Priest in Akira Kurosawa’s landmark of world cinema, Rashômon, still ring true today. His kaleidoscopic tale of a rape and murder in mediaeval Japan has fascinated audiences and fellow filmmakers for the past seventy years. It echoes throughout the latest epic directed by Sir Ridley Scott (no stranger to period pieces), and it mostly overshadows it.

The Last Duel draws its inspiration from a historical event: the final sanctioned trial by combat in France, authorized by the teenaged King Charles VI in 1386. For their screenplay, the writing and acting duo of Matt Damon and Ben Affleck adapted the 2004 novel by Eric Jager. Importantly, they recruited Academy Award nominee Nicole Holofcener (Can You Ever Forgive Me?) to write the final act. Thank goodness.

It’s not that the movie is awful for the first two hours. It’s just relentlessly unmemorable, given the subject matter and wealth of talent involved in the project. In this retelling, the victim, Marguerite (Jodie Comer), becomes a courageous, liberated woman, a heroine in the manner of #MeToo. Her appropriately scandalized husband, the Norman knight Jean de Carrouges (Damon), reluctantly pursues the duel against his erstwhile best friend, the dissolute squire Jacques Le Gris (Adam Driver). Affleck plays Count Pierre d’Alençon, the devious and promiscuous nobleman who initially rejected Marguerite’s accusations.

The story sounds compelling, but the film meanders through the introduction and first two accounts of the alleged sexual assault and its immediate aftermath–those told by Jean and Jacques. The events are related meticulously, with changing perspectives and camera placements, but not in a way that creates much narrative or emotional resonance (or artful dialogue). But then the third act arrives, and suddenly the picture becomes positively gripping, even as the words “the truth” linger on the title card before Marguerite’s version of the assault.

Comer (an Emmy winner for her portrayal of Villanelle on Killing Eve) shines as the daughter of a traitorous landowner who initially loves her husband, despite their arranged marriage. However, Jean’s excessive dedication to the king and warfare, while his wife chafes at his relative neglect and condescension, creates increasing strains in their relationship. She briefly flirts with Le Gris, and tragedy follows. When she insists on presenting her story before the royal court, her resolve and desire for justice collide with entrenched male privilege of the ugliest kind.

Having delayed the title event for so long, Scott delivers on the duel. Expertly shot and edited, it’s visceral, violent, graphic, absurd, ironic and archaic. It’s laced with historical symbols and timely metaphors. It’s the perfect indictment of a tradition which glorified the vanity and self-importance of men and crudely devalued women. Indeed, a cleric had advised a troubled Le Gris that rape is a “property matter.”

Matt Damon, who worked very successfully with Scott on The Martian, bellows and blusters his way through this tale as Jean, trying to convey his burly, impulsive character’s sense of loyalty and morality in a world beyond his control. His voice goes from his own to a variation of a pseudo-English accent. Adam Driver fares best among the male cast, capturing more nuance in Jacques’ friendship with Jean forged in battle and his grudging allegiance to Pierre. As for the Count, the sandy-haired Affleck plays him as a buffoon. He sounds like one, too, with his clenched jaw and mushy delivery. His attempts at humor range from the bland to the embarrassing. Harriet Walter, the English actress whose recent work has included Succession, Ted Lasso and Killing Eve, is largely wasted as Jean’s imperious mother, Nicole.

Composer Harry Gregson-Williams (The Martian, the Shrek franchise) gets high marks for his elegant score which combines rich orchestrations with tasteful arrangements of period songs. The production design by Arthur Max evokes a good deal of fourteenth-century detail. Cinematographer Dariusz Wolski, whose résumé includes music videos and the Pirates of the Caribbean franchise, makes the most of a story set in perpetual winter, with various shades of greys, browns and metallic blues. The CGI, which incorporates the iconic image of Notre Dame Cathedral under construction–a historical fallacy–in several of the Parisian scenes, rarely rises above the ordinary. As for Scott, his direction, like the film in general, seems remarkably uninspired until the stirring (and disturbing) final act. At age 83, he remains as active as ever, with nearly twenty projects in the pipeline right now, including a television spinoff of Blade Runner and a movie sequel to Gladiator.

In the end, The Last Duel demands patience. It requires you to sit through two hours of the mostly ordinary in order to get to the really superb. If you’re prepared to trust the big-name cast and director to that degree, you will have earned your reward.