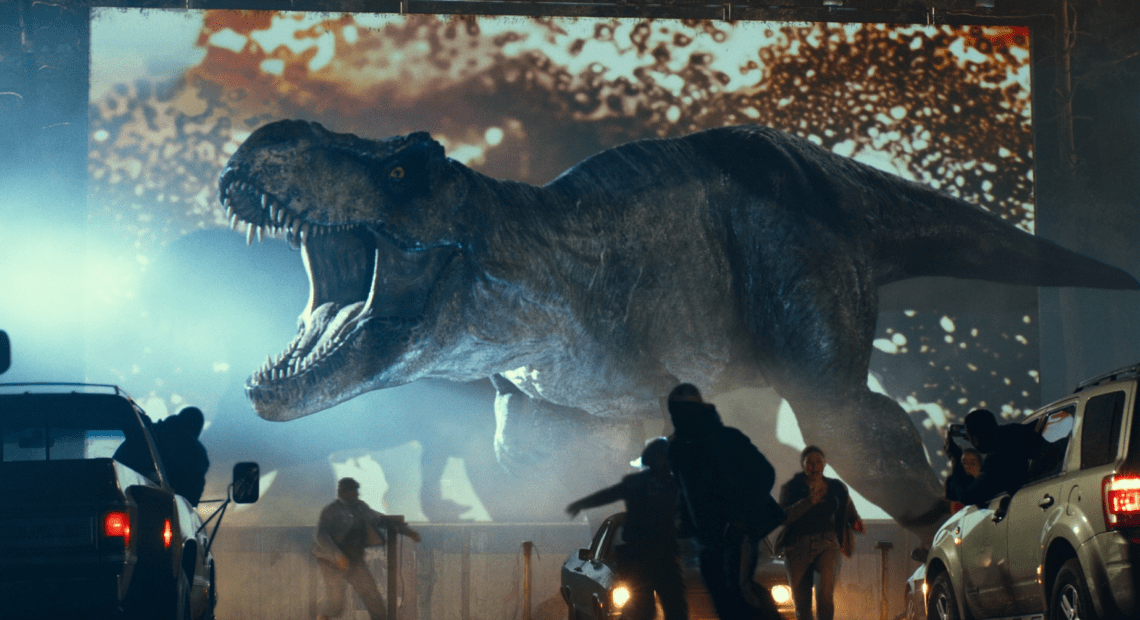 According to the real-life paleontologists, dinosaurs disappeared from Earth 66 million years ago. To judge by the sixth entry in the Jurassic Park franchise, its fresh story ideas have been exhausted as well. The original wonder has waned.

Make no mistake. This is a calculated commercial entertainment for a mass audience, with a budget of approximately 165-million dollars. Ironically, it turns out to be overproduced in terms of set-piece action and chase scenes, while decidedly underproduced in the way of script and scenario. Its modest attempt to deliver an eco-conscious message gets overwhelmed in the process.

With the destruction of the fictional island of Isla Nubar in Jurassic World: Fallen Kingdom (2018), this latest installment takes place four years later. Dinosaurs and humans live, and hunt, alongside each other across the planet. However, trouble awaits, in the form of Biosyn, a tech firm run by a relatively soft-spoken but no less sinister Steve Jobs-like guru, Lewis Dodgson (Campbell Scott). You may recall him as a minor character in the first movie. Now he hopes to monopolize the world’s food supply by unleashing a plague of fanged insects unwittingly developed by one of his researchers, Doctor Henry Wu (BD Wong). He also arranges the kidnapping of Maisie Lockwood (Isabella Sermon), a young girl-clone of a deceased scientist whose DNA may unlock the path to global domination. Chris Pratt (Owen Grady) and Bryce Dallas Howard (Claire Dearing) portray her seriously protective surrogate parents and dino-liberators. Among the supporting cast, DeWanda Wise clearly fares best as the daring pilot with a wicked sense of humor.

Colin Trevorrow, who has served as a producer, director and co-writer for all of the pictures in this second Jurassic trilogy (along with the Netflix animated spinoff Jurassic World Camp Cretaceous), has squandered a real opportunity here. With the animatronic dinosaurs off the island and onto the mainland, he and his collaborators could have delivered a story rich with ideas about history, science, ecology–even humanity. Instead, the screenplay retreats into a parade of movie clichés and genres. We get a kidnapping, a Biblical plague (locusts), a shootout with smugglers, multiple chase scenes (on foot and in vehicles), a cave exploration, a plane crash and a major fire. Think of them as subplots without a coherent overarching narrative.

We get nostalgia, too, with the return of the stars of the original Jurassic Park (1993). Doctors Ellie Sattler (Laura Dern) and Alan Grant (Sam Neill) are reunited, with the prospect of a romantic connection, after all. And Doctor Ian Malcolm (Jeff Goldblum) is back as a mathematician-philosopher-skeptic in the employ of the evil Dodgson. Malcolm makes his first appearance in a lecture hall speaking grand words, then does a vanishing act until the movie’s final act. By then, it has devolved into a series of opportunities for all of the lead characters to pose for the camera, in the manner of an MCU blockbuster.

As this epic plays out–it runs nearly two-and-a-half hours–the action scenes look increasingly derivative. We’ve seen their likes before in the Godzilla, Bourne, Mission: Impossible and Raiders of the Lost Ark/Indiana Jones franchises, as well as Apocalypse Now. All the while, they just just lend more chaos to the multiple threads in the plot, as all of the principals make their way, willingly or otherwise, to the Dolemite Mountains in northern Italy, where Biosyn has its compound and nature preserve. Back to a park, in other words.

Oh, yes, the dinosaurs. The ultimate stars of the Jurassic adventures. The tyrannosaurus. The brachiosaurus. And the most fearsome carnivore of all, the giganotosaurus. The creative team conceived eighteen different types for Dominion, and they appear, right on cue, at all of the most inopportune gotcha moments. But they, too, have to survive a tedious storyline.

For all of its derivative action sequences, Dominion does offer many strikingly impressive visuals. Claire, holding her breath just beneath the surface of the water as a dinosaur looms overhead. The swirling plague of locusts. An explosive fire unleashed in a glass laboratory. Blasts of steam in an underground train tunnel. They are memorable. Overall, the film is not.

Nearly thirty years ago, director Steven Spielberg (an executive producer here) and novelist/co-screenwriter Michael Crichton unleashed an imaginative, intelligent and genuinely exciting science fiction action film. The original Jurassic Park doubled as a cautionary tale about the potential dangers of genetic engineering and unfettered corporate greed. Now, as the last installment of the second trilogy has made its way to the big screen, the creatures and the science remain stuck in a time warp. Even the nod toward Spielberg-like sentimentality at the end of Jurassic World Dominion can’t save it from its empty plot devices. This franchise’s DNA has lost its fascination.