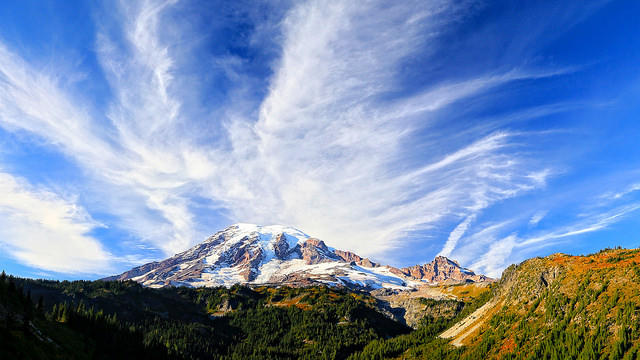 It was a warm winter in the Northwest this year. It certainly rained, and it was plenty gray, but there wasn’t much snow. And that means low snowpack. The Washington Department of Ecology says Washington snowpack is at 21 percent of normal levels.

This has many concerned about this summer’s weather – and the fire season. Last year saw devastating fires in both Oregon and Washington and low snowpack means a hot, dry summer. Northwest firefighters are anticipating an early fire season and are already preparing for a “very bad” fire season, says Northwest Interagency Coordination Center manager Dan O’Brien.

In Oregon, training for firefighters is already underway, and there are concerns that fire insurance could cost the state a lot in anticipation of a difficult year – Oregon’s Bend Bulletin reports that costs “will skyrocket.”

Low snowpack doesn’t just mean fire risk, it can also be a problem for the Northwest’s water supply. There have already been drought emergencies declared in Washington and things could become more difficult as the Northwest moves into summer.

However, precipitation is normal for most of the Northwest this year – it’s just falling as rain, rather than snow. That increased rain could make up for some of the lost snowpack. Amy Snover, director of UW’s Climate Impacts Group, says it will mean water management changes.

One contributor to this year’s weather is “The Blob,” an unusually warm patch of water in the Pacific Ocean named by a University of Washington researcher. And it may have been part of the same weather pattern that led to the “polar vortex” which brought heavy snowfall and cold weather to the Midwest and Northeast.

What does this all mean for overall Northwest climate trends? Snover calls this year’s low snowpack a “dress rehearsal for climate change.” This is echoed by the environmental reporting site Circle of Blue, which called it a “climate change preview.” It cites a University of Idaho study which says this:

““Projected warming will have significant impacts on snowfall accumulation and melt, with implications for water availability and management in snow-dominated regions.”

In other words, Northwest winters will continue to stay rainy, not snowy, and low snowpack could be the new normal.

That doesn’t mean every winter from now on is guaranteed to look like 2014’s. Snover says it’s still an anomaly, but an anomaly we’ll see more often in the future:

“When people ask me about this year and whether this is global warming, I say well, global warming looks like this,” Snover says. “And I also say that we’ll see a lot more of these more frequently as we go forward.”

But some are more optimistic. University of Washington professor and atmospheric sciences researcher, Cliff Mass, predicts the Northwest may experience much milder weather than the rest of the country. Why? Mass says the Northwest won’t see massive droughts, dramatically rising sea levels, or more frequent hurricanes. But, Mass says, you can expect more rainy years over the next century: “We expect precipitation to actually increase here in the Northwest.”